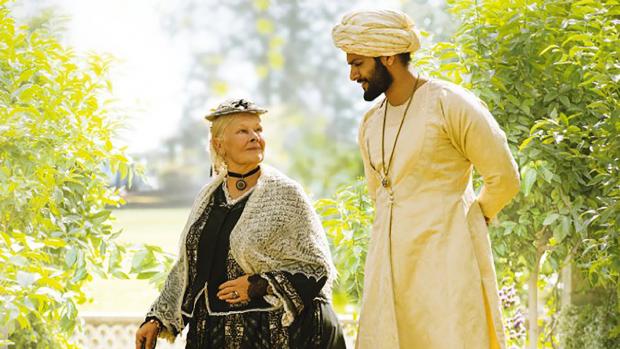 Long brushed aside as a symbol of priggishness and repression, Queen Victoria, who reigned over the British Empire from 1837 through 1901, has had her image revitalized in recent decades. There was the 1997 film Mrs. Brown, about her 20-year friendship with her Scottish servant John Brown, a man who was rumored in some quarters to have taken the place in more than one way of the Queen’s deceased husband. Her early years are currently the subject of the popular British television series Victoria, the second season of which will be shown on PBS later this year.

And now there’s Victoria and Abdul, about her relationship in the final years of her life with an Indian servant. Judi Dench, who played Victoria in Mrs. Brown, returns to the role beginning with the Queen’s jubilee celebration in 1887. The country goes all out to celebrate her 50 years on the throne, and those who adore ceremonies and all that go with them are in their glory.

The subject of these revels, unfortunately, is not among them. Looking considerably older than her 67 years, Victoria has to be carried out of bed in the morning and assembled before being put in place for whatever the day requires. “Everyone I love has died, and I just go on and on,” she mutters on one of the rare occasions when she seems aware of anyone around her.

But one thing does catch her attention: a tall, handsome Indian attendant at a ceremonial dinner. Though she has never been to India, she is intrigued by what she has heard of it: It seems sparkly and interesting, which is true of nothing else around her.

How Abdul Karim (Ali Fazal) came to be here is the best part of the movie, which I won’t spoil for you. He becomes her close companion, to the dismay of her staff and household, who barely bother hiding their racism.

Directed by Stephen Frears (The Queen), Victoria and Abdul is at its best when it allows the British to indulge in their favorite pastime: making fun of themselves. The overwrought jubilee ceremonies, in which pomp grinds substance into dust, are quite funny. And the screenplay by Lee Hall (Billy Elliot) delights in showing the household at each other’s throats. “You’re treating him like a member of the family,” complains Victoria’s son, the future Edward VII (Eddie Izzard), to which she retorts,  “No, I like Abdul.”

Fazal makes for a very charming leading man (more so than his historical character, apparently, but that’s why movies like these open with statements like “Based on real events…mostly”). The historical record sometimes intrudes—you can’t introduce gonorrhea into a story like this and then forget about it without explaining how it got there—but for the most part Victoria and Abdul is an Anglophile’s delight.