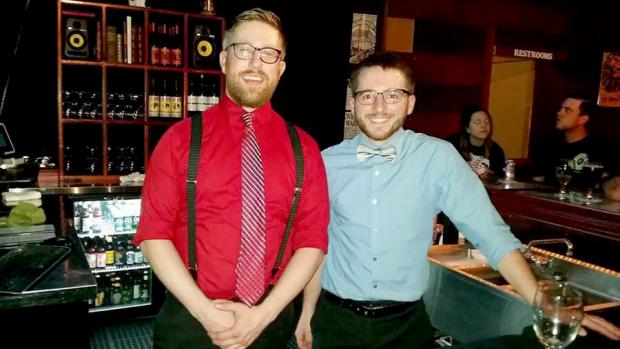 A new bar has moved into the theater district in Buffalo and it’s got a distinctly loungey vibe and a great beer selection. The bar is called Matinee, located at 698 Main Street, and it’s owned and operated by friends and business partners Ryan “Rex” Keppel and Kevin Shanahan.

The bar hopes to serves frequenters of the theater scene and those looking for a nice, relaxing atmosphere.

Any patron of the bar will immediately notice a couple of things when they walk in. First, they’ll notice the decor, which includes comfy leather couches, vintage stage props, a small stage, and the centerpiece—a handmade bar. Second is the fairly extensive beer collection, which at last count was up to 112 different bottles and cans.

The bar that the beers are served atop is made of pine and cherrywood, and underneath the glass bar-top are an array of antique theater stage plots—drawings or blueprints that stage carpenters would use as a guide while building their sets. The partners were given the blueprints when they helped the owner of a nearby storage unit clean it out.

“We knew that we were going to build a bar out of them right away,” says Keppel, who worked at the Town Ballroom and the Waiting Room before opening Matinee. “My uncle is a carpenter and I paid a lot of attention to that stuff growing up. We cut around it. The edges were messed up but the pictures were great and we worked around that.”

Shanahan unrolls a huge blueprint and holds it up. This one is of the Calumet building when it housed the Irish Classical Theater. It’s got a little tear in it but the guys eventually are going to repair and frame them for hanging in the bar. On a projector screen above the bar plays the 1942 film Eyes in the Night.

Before he went into business with Keppel to open Matinee, Shanahan was a bartender for five or six years. Now he’s in here every day serving beer, which he seems to really enjoy.

“Bartending has always been nice to me, and I’ve always been decent at it, so I thought I might as well open up a bar,” says Shanahan, as he cleans out a goblet to pour our next beer into, which I let Keppel choose for me.

“I’ve been into craft beer for years. I didn’t think this bar was going to become a craft bar. It just happened that way.”

Keppel chooses a Rodenbach Grand Cru, a winey Belgian beer with a sour pucker to it. It almost tastes like Chiavetta’s dressing, notes Manny Lewis, a friend of Keppel who is sitting with us at the bar.

“I’ve been here since day one,” says Lewis, who is also known as DJ Sike. Keppel and Lewis have been friends since grade school and Lewis has recently helped them shoot a commercial for the bar.

“I feel like anybody could come in here and instantly feel comfortable,” says Travis Vasquez, a Buffalo-based musician and another friend of Keppel.

Keppel has a background in music. He worked as a roadie for a few bands, including the alternative rock band Saves the Day and the Buffalo band Pentimento.

“I traveled with [Pentimento] around the country a couple times and that’s what got me into thinking about doing a place like this back home,” says Keppel. “We went to so many smaller venues around the cities and stuff, and I wanted to make something like that in Buffalo. It fell into place pretty well.”

Keppel and Shanahan have also played music together in a band, which would practice in the band practice spaces located next door. They had their eyes on the location for a while.

Before Matinee opened, the location was a coffee shop, but only for a few months. It suddenly closed and the friends took the opportunity to move in.

“We’ve been around artists and musicians our whole lives so we kind of picked up on the creativity of our friends and stuff. You don’t have to have a lot of materials to start something like this, it just has to be the right ones,” says Keppel.

“We started asking people if we were to open a bar what could they help us with. We got the coolers for pretty cheap, and we got all of our tables and chairs at an auction for a good price, and it made the big picture seem a lot more reasonable and attainable.”

Their first thought was to open a café. That idea quickly morphed into a café-like lounge bar. They wanted a coffee shop feel with a late-night atmosphere, the partners tell me. They also quickly realized the opportunity to serve the theater crowd.

“We wanted to gear it towards people who are going to and from shows. Matinee came up as the name because in the neighborhood there’s the Encore, there’s the Cabaret, there are all different kinds of places. So we thought we should keep it theater-themed.”

Though they thought they might be serving the pre-show crowd, they’ve learned that the after-party crowd is more likely to stop in. That’s primarily because most people don’t know they exist yet. Folks show up to their play, notice the intimate, nicely decorated bar, and make a note to stop in afterward.

Their biggest challenge yet has been this year’s Curtain Up. It was also their best day at the bar hands down.

“[Curtain Up] is the Super Bowl of the theater season, so it was very very intense. It’s gotten bigger as the years have gone on and now we’re a part of it so it’s really cool to see. It was our biggest day as a bar,” says Keppel.”

“Fridays and Saturdays we kinda just roll with it and see what the neighborhood brings us,” says Keppel.