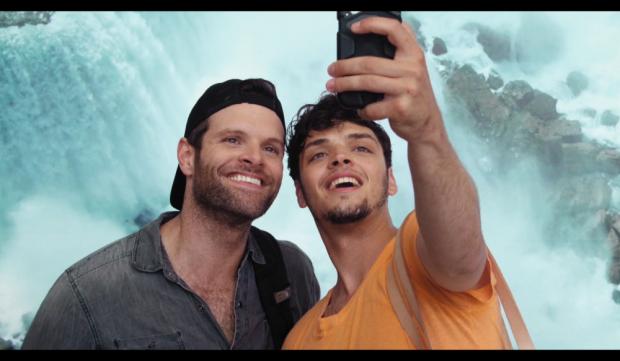 So here’s my conundrum: I want to do everything I can to encourage all of you to check out at least some of the film unspooling this weekend at the latest Buffalo International Film Festival. The festival organizers have made a few dozen of the feature films they will be showing available to me for preview. I appreciate the opportunity, but I really don’t have time to screen 20 or more movies. And besides, I would much rather see them on the big screen at the North Park, or even the smaller screens at Hallwalls or Squeaky Wheel. So how can I do my job as a journalist without depriving myself of the chance to see movies the way they were meant to be seen?

Here’s what I did. I watched the first 15 minutes of as many screeners as a I could. Bearing in mind that some of the more high profile films, like Thunder Road (7:15 PM Saturday, North Park), were not available for preview, let me recommend the movies I sampled that I hope to watch the rest of this weekend.

Topping the list is The Rainbow Bridge Motel (7:30 pm Sunday, North Park), filmed in not-so-beautiful downtown Niagara Falls NY. A gay couple from Arizona travels here to get married at what advertises itself as the “No. 1 gay wedding location,” only to find themselves at a dilapidated motel surrounded by factories. Co-writers and directors J. Garrett Vorreuter and Scott Rubin (former editor of the National Lampoon) are locals who recognize that Niagara Falls is the most underutilized film location in the world, for its natural beauty as much as for its man-made ugliness. I laughed enough during the first fifteen minutes that I look forward to seeing the rest with an audience.

Playing Frisbee in North Korea (5:15 PM Saturday, Squeaky Wheel)—You’ve probably seen the nighttime satellite photos of southern Asia that show what appears to be a big black hole between South Korea and China. That’s North Korea, a country so underdeveloped that it casts no light at night. For decades its rulers have keep foreigners out and natives in, and neither knows much about the other. Filmmaker Savanna Washington was part of a rare tour into the country, during which she surreptitiously shot this film. Rounded out with interviews with scholar and refugees, it’s a rare bird, a documentary on a place that, for all that it appears in the news, is almost completely unknown.

The Foundation of Criminal Excellence (11:30 AM Sunday, Hallwalls)—How’s that for an attention-grabbing title? The opening fifteen minutes of this Latvian comedy show what appear to be the world’s worst con men pulling off a sting on a bartender. They turn out to be script writers researching a reality show about grifters. Hailing from a part of the world of which I have no knowledge or pre-conceptions (I had to look it up on a world map), this had the off-kilter grunginess of an Aki Kaurismaki movie, which is my obscure way of saying that I want to see the rest of it.

The Rainbow Experiment (7:15 PM Friday, North Park) put my 15-minute system to the test. With a cast of 36 characters in parts that writer-director Christina Kallas intensively developed with her actors before shooting began, this independent drama is clearly not lacking in ambition. The setting is a high school where a classroom explosion triggers emotional shock waves. Whether or not Kallas will be able to live up to the inspiration of filmmakers like Robert Altman and Mike Leigh, you have to admire both her taste and her ambition.

We all know that the US is undergoing a drug crisis worse than at any other time in our history. Facets of that are explored in three gripping documentaries. The Providers (1:15 PM Saturday, Hallwalls) looks at the struggles of a free health care clinic servicing an area of 2000 square miles in northeastern New Mexico, where the average income is $17,000. It ranks in the top five in the nation for heroin overdoses, a problem that the local doctor says would be wholly untreated if she ever retired. The Sentence (6:45 PM Monday, Hallwalls) examines the effect of hash mandatory sentencing laws through their effect on one family in which a mother of young children is sent to prison for 15 years for presumed knowledge of her ex-husband’s crimes. American Relapse (7 PM Monday, North Park) features two very flawed heroes, former Delray Beach junkies who are trying to reach out and help others like them without get pulled back into that lifestyle. It’s a shame that the latter two are playing at the same time—that kind of embarrassment of riches is part and parcel of a good film festival. If I had to chose, I would recommend American Relapse for its dissection of a heartless rehab industry that makes big piles of money from making sure the addicts it treats never fully recover.

There’s plenty of other evidence at BIFF that, as is often said, we live in a golden age of documentaries. Dawnland (2:15 PM Monday, North Park) confronts one of the uglier government policies of the last century: the removal of Native American children from their families and homes by Child Welfare agencies, who sent them to adoption or group homes on the theory that their lives would be better if they grew up non-Indian. Anote’s Ark (11:30 AM Saturday, North Park) looks at a nation that has the unfortunate distinction of being on the cutting edge of climate change: the low-lying Micronesian island group of Kiribati, which in a matter of decades will be entirely underwater as the world’s oceans rise.

In summary, it looks to me that, as in years past, the ratio of good to not-so-good films at BIFF is as high or higher than at any other festival I’ve attended: if you just walk into any movie at random, odds are it will be a good one. If you haven’t already purchased your Bison Pass, which for the insane price of $39.99 gets you into every movie as well as an assortment of parties and special events, you have until noon Friday to do so. Complete festival details and pass purchase (along with tickets for individual screenings) are available at https://www.buffalofilm.org.