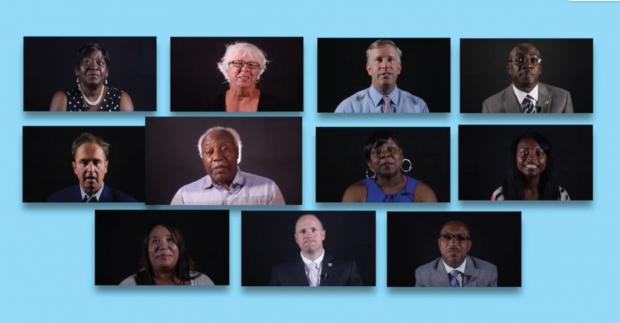 “It also involves ethics. It involves trust…and standing up for those things that need to be stood up for.”

“No man is an island, no man stands alone.”

—Some voiceover anonymous suggested definitions of the term and concept “civic engagement,” at the start of the student production video Civic Heart

Why start with definitions? Or make a movie on civic engagement in the first place? Because, in the view of former Buffalo Common Council President James Pitts, formerly “these things were taught in school, but they’re not anymore. And a lot of time not even taught in the home.”

The movie was a summer project of a team of Buffalo Public high school students, who interviewed a dozen or so officials and workers in the public realm on the topic.

So plentiful clichés and banalities and fatuities, particularly from the politicians. Mayor Byron Brown: “I think it’s important for young people to be civically engaged, because young people are the leaders of the future.” State Senator Chris Jacobs: “Become involved. You don’t know where it will take you, but I think you could wind up a better person in all respects if you do.”

On why civic engagement critically matters, from Darius Pridgen: “because what this whole exercise in government is, it’s about the will of the people…if people are not involved, it leaves it up to elected officials to do what they want…”

And from Barbara Bono, in the same vein, but rather more theoretical take on the matter: “We make the civic society, we make the government, and we make religion, out of our own need for something bigger than ourselves, but I think we make it. I don’t think it pre-exists.”

But meaningful civic engagement not easy to achieve in racially and economically segregated Buffalo. Most of the talk—when it isn’t about nothing at all—the clichés and banalities and fatuities—about present effects of historical patterns of blacks in particular and minorities in general being shut out of the process.

Pitts talks about the need for greater diversity in the civic engagement process. In which respect, he says, “we still have a long way to go.” Pridgen pursues and broadens the theme, talking about “the crucial matter of income—and opportunity—inequality. I oversee a district that contains some of the wealthiest people in the city, and some of the most struggling financially. Both sides need to be engaged and involved. On the one side they have resources, and some expertise. But now it’s about teaching the other side to be engaged, because it’s about their livelihood as well, their quality of life…”

Pitts puts it a little differently. What area would benefit most from improved civic engagement? “I’d say the whole city. I call the East Side the hole in the doughnut. When you look at what’s happening with the Buffalo renaissance…” Other areas making significant gains, the East Side not so much. At the moment, more threatened by the renaissance—by gentrification—than being benefited.

He notes—referring to published academic studies—how “the neighborhoods we live in are the most important spaces when it comes to shaping us. Studies that show you can predict what a person’s success or failure will be based on their zip code.”

Asked more specifically about the “obstacles” to civic engagement in Buffalo, Nephew reiterated, “that there has been so much disenfranchisement.” And “poverty, and it’s extremely layered. It’s systemic.”

Danielle Little, former intern to Assemblywoman Crystal Peoples-Stokes, said, “communication. The public doesn’t get an opportunity to get involved in what’s going on if it isn’t publicized correctly.”

Crystal Peoples-Stokes said, “Within government itself? I would say there are no obstacles, but in the people who participate in government, people who are in office or are running for office, I think they are a deterrent because they try to preach hopelessness…”

Maybe a good topic for the next video.

You can view the movie at dailypublic.com.