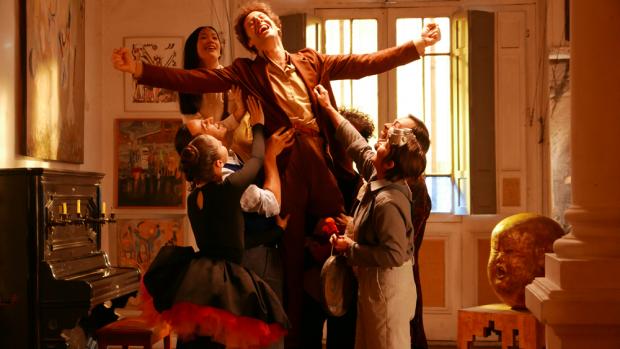 I can’t be too blunt about this: If you’re on this page to begin with, I can’t imagine why you wouldn’t already have a Bison Pass to BIFF XI, the 11th edition of the Buffalo International Film Festival. The pass, available until noon Friday, costs $39.99, for which you get admission to four days of movies, at some points on as many as four screens: the North Park Theatre, Hallwalls, Squeaky Wheel, and for the first time this year the Burchfield Penney Art Center. If you only see one movie on each of those days, you’ll have paid less than you would have at any other theater. Clear your calendar and you can see at least 21, which—let me whip out my calculator here—comes to $1.90 each.

You just can’t beat that.

Would you be likely to enjoy all 21 movies? I’m not going to tell you that. I previewed a fair number of them and didn’t like all the ones I saw. But the percentage was better than what comes through movie theaters on a regular basis the rest of the year. And—getting to the thing I really love about film festivals—I saw and enjoyed a bunch of movies that I wouldn’t otherwise have taken a chance on. BIFF is a curated festival, which means that the films it shows have been watched and selected by staff programmers, people who either watch movies for a living or have been doing so long enough that they can still claim some expertise. This is not always the case: There are film festivals where you don’t have to do much more to get your movie shown than pay the organizers a submission fee.

And if you don’t like a movie, walk out. These days, there are much worse places to have to kill a little time than on Hertel Ave. near the North Park, where the bulk of BIFF unspools. Get a drink, get something to eat, maybe do a little shopping, and get back to your seat fortified for the next movie.

I’ve been following BIFF since the days when it was a struggling pet project of the late Ed Summers. In the past three years, it has set itself the goal of becoming a world-class film festival, and it has kept on that course. This year marks the first time it will be showing a movie from a major studio, the filmed-in-Buffalo drama Marshall. Among the 112 films it will screen, coming from 25 countries, are others that are hoping to get into theaters in the coming months (a traditional purpose of film festivals). And if others are destined to go directly to streaming services, that’s no longer a badge of failure: As I write this, Our Souls at Night, starring Robert Redford and Jane Fonda, and Noah Baumbach’s The Meyerowitz Stories (New and Selected), starring Ben Stiller, Adam Sandler, Dustin Hoffman, and Emma Thompson, have just premiered on Netflix. A festival like BIFF gives you a chance to discover new work on a big screen, where it has a better chance to capture your imagination than in your living room.

My favorite of the films I was able to preview was Endless Poetry, from veteran filmmaker Alejandro Jodorowsky, who helped invented the “midnight movie” in the 1970s with El Topo and The Holy Mountain. Now in his late 80s, Jodorowsky has lost none of the power with surreal imagery that has always marked his work in this biographical account of his youth in Chile, where he defied his parents to take up a bohemian life as a poet. The gorgeous photography is by Christopher Doyle, the cinematographer known for his work with Wong Kar Wai, Jim Jarmusch, and Zhang Yimou (Sat 5:30 pm, Burchfield Penney Art Center).

Hardcore arthouse fans will be the best audience for The Algebra of Need (Sat 5pm, North Park), in which local filmmaker David R. Williams uses Buffalo as a setting to re-imagine classic moments from the work of Godard, Bergman, Antonioni, Robbe-Grillet, Resnais, Burroughs, Sartre, and Marguerite Duras.

Dysfunctional families (is their any other kind?) are the focus of another pair of films I liked. Filmed in a beautiful house in Lewiston After the Sun Fell (Sun 1:30pm, North Park) puts a young cartoonist the midst of long-simmering conflicts when he visits with his friend, the prodigal sun. Lance Henriksen is droll as the pants eschewing paterfamilias, while Joanna Bayless is hilarious as the crazy mother. She’ll be present along with director Tony Glazer for a Q&A. British reserve is shown to be more appropriate than it is often given credit for in Waking David (Fri 5pm, North Park), in which an American self-help writer on a speaking tour in England visits the family of her biological father. With a script improvise by the leading cast, it’s very much in the Mike Leigh mold (down to the string quartet score), but give me a Mike Leigh imitation over a Michael Bey imitation any day of the week.

On the jollier side is Unstoppable Irving Fields (Fri 12:30pm, North Park), a documentary about the piano player who became famous in the 1940s and 1950s for his combination of Jewish and Latin music (his album Bagels and Bongos—no, I didn’t make that up—sold two million albums). At the age of 99 he’s still cheerfully playing in Manhattan clubs and restaurants. When he has to find a new gig he starts calling around; having no success, he decides to start lying about his age and tells the next prospect that he’s only 92.

As a former projectionist who worked with carbon arc machines, I was delighted by the documentary The Cinema Travellers (Mon 12pm, North Park). In India, travelling showmen went from village to village for decades setting up projectors in tents to show movies to people who otherwise never had a chance to see them. That this practice still exists at all is a surprise in an era of digital ubiquity, and the pleasure of watching them ply their trade for delighted but shrinking audiences is matched by the sadness of watching it disappear before their (and our) eyes.

Another documentary, Centralia (Sun noon, Hallwalls) tells the story of the town that is the sixth most visited tourist attraction in the state of Pennsylvania, not that anyone profits from it: The mine underneath the town caught fire in 1962, and efforts to extinguish it were so botched that by the 1980s it had to be abandoned because of the toxic gases released by the fire. Only a few residents remain, and the fire is still burning.

Onur Tukel is a name I came to know after BIFF IX, where I saw his goofy Abby Singer Songwriter. You may have seen his blunt but very funny Catfight from last year. Apparently a bottomless pit of ideas, he contributed the script for Infinity Baby (Sat 11pm, North Park), an oddball satire filmed in black and white in Austin with a bunch of familiar faces who must live there, given that the budget of this one probably wasn’t high enough to pay their airfare: Megan Mullally, Nick Offerman, Martin Starr, Stephen Root, Kieran Culkin, and Kevin Corrigan. Reminiscent of the underground black comedies of the late 1960s, it uses a sci-fi premise, the development of babies that don’t grow up, as the basis for a satirical look at modern relationships. This Tukel guy is never going to get a big studio budget: Consider that a recommendation.