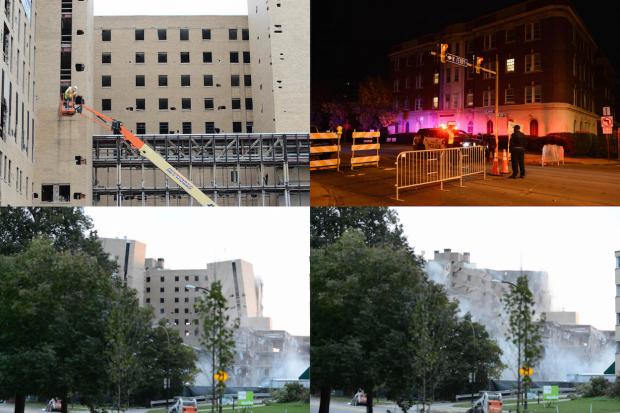 Images clockwise from top left: pre-implosion crews check the building on Friday, October 2; Police secure the perimeter around the former Millard Fillmore Hospital beginning at 3:00 a.m. on October 3; the first explosion; the building buckles after a series of controlled blasts and a cloud of debris then rises. Photos: Nancy J. Parisi
by
Nancy J. Parisi
/ Oct. 3, 2015 10am EST

The Buffalo hospital named for the former tailor who arrived in the city in 1822, lawyer, University at Buffalo founder, State Assemblyman, Congressman and 13th U.S. president was imploded on Saturday, October 3, 2015. Millard Fillmore Gates Circle Hospital, founded in 1872, taken over by Kaleida Health and shut down in 2012, was reduced to rubble after several controlled explosions throughout the building.

3 Gates Circle (adjacent Gates Circle is a Post Pan-Am expo E.B. Green design) was once a tricycle factory in the nineteenth century, according to a page devoted to the site’s history and contamination, viewable on the website of NYS Department of Environmental Conservation. Millard Fillmore Hospital began as The Buffalo Homeopathic Hospital at the corner of Washington Street and North Division. It moved to Gates Circle on Delaware Avenue in 1911; it was renamed for the famous Buffalonian in 1923.

Pre-dawn on October 3, police cars held down perimeters approximately 500 feet from the building, flashers on. Nearby residents held Implosion Parties. Joggers and errant pedestrians were hollered at. Neighbors from Cleveland Avenue, arriving with lawn chairs and cocktails in hand were told to “Go back to Cleveland.”

At 7:15 a.m. a series of explosions were heard, and a few flashes of light. The building waved and buckled and a giant, rolling cloud of debris rose up. Shouts from nearby Implosion Parties – and from those who closed in on the perimeter – could be heard.

Several lamented the loss of the hospital, noting births and deaths having taken place at Millard Fillmore. A while later, standing in line at a coffee shop, a well-known attorney and philanthropist, mistaken for an Implosion watcher, says “It’s nothing to be happy about.” Nonetheless, this reporter notes, it is indeed Buffalo history now.