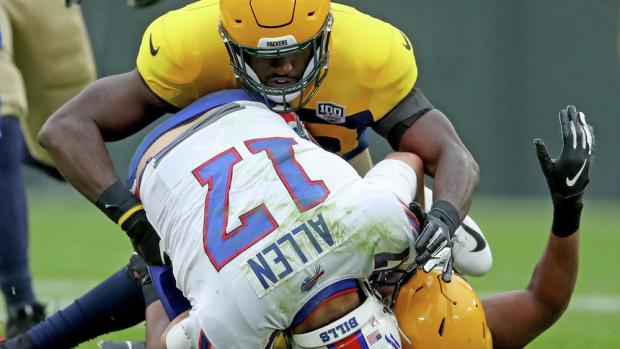 After Josh Allen and the rest of the Buffalo Bills sprung the biggest upset—in terms of the point spread, at least— of the season on the Vikings in Minneapolis, it didn’t seem like a stretch to envision them staging a repeat in Green Bay on Sunday.

After a pitiful start to the season with Nathan Peterman impersonating an NFL quarterback, poorly, Allen had given the Bills athleticism, accuracy, and composure at the position.

Green Bay had looked worse each week for the first three, while the Bills headed in the opposite direction. Though the oddsmakers still made the Packers a 10.5-point favorite, Buffalo looked like a prime candidate to pull off a second straight double-digit shocker.

Sunday had shaped up as an ideal sports day with the We Want Marangi coverage team, which consisted, on this Sunday, of my sons and I in my living room.

Besides the suddenly intriguing Bills game, there were four baseball games—which carry much more interest for my 15-year-old, Jackson—with playoff implications starting at 3pm. Jackson’s just-turned-12 brother, Oscar, is only intermittently interested in televised sports, but had his new virtual-reality gaming system (which, blessedly, does not require use of the television) to keep him amused. At least six hours of sporting drama loomed.

For about one quarter of the Bills game, at least.

Allen started the opening possession with a seven-yard dump-off to LeSean McCoy. It would prove the rookie’s high point for the afternoon. Alleged power back Chris Ivory got stuffed in the ensuing third-and-one, but the Buffalo defense stopped Rodgers and the Packers’ offense, and all appeared well.

Until, that is, Allen misfired on three straight passes with the ball 18 feet from his own end zone. Rodgers covered most of the resulting short field with a bomb to Ty Montgomery that converted one third down, then flipped a three-yard touchdown to Jimmy Graham on another.

The rest of the first half followed the same script. When the Bills pressured Rodgers, he made just enough time for himself to find a receiver who had come open in the interim. When they appeared to have his targets covered, he found tiny openings and lasered the ball into them. And when Buffalo almost had the Packers stopped, Rodgers found a way to keep them moving.

As Rodgers played the Hall-of-Famer-in-waiting, Allen looked the part of a flustered rookie. To be fair, he got no help. The offensive line rarely provided him with adequate time, or McCoy and Ivory safe passage even back to the line, much less into the Packers’ secondary. Not that either aging Buffalo running back looked able to make anything happen on his own.

His receivers seemed to think their job description involved staying as close to Green Bay defenders as possible. When they failed at that, and Allen had time to see their availability and deliver the ball on target, they dropped it.

More often, though, Allen was lost when his first option was covered. The Packers did not provide the same chances to run free he had enjoyed against Minnesota.

So he threw high. He threw low. He threw to no one in particular.

This demoralizing pattern continued for most of the first half, until the Packers had ground out a 13-0 lead. Just after the two-minute warning, Allen connected with Kelvin Benjamin, who had accomplished the rare-for-him dual feat of not only getting open but also holding on to the ball.

The 34-yard gain positioned the Bills to cut the deficit in half or, at the bare minimum, to settle for a field goal that would put them back in the game, especially since they would get the ball back to start with the second half.

Instead, Allen rolled to his right on third-and-five from Green Bay’s 20-yard line. And kept rolling. And kept rolling. Finally, running out of field, he did not fling the ball harmlessly out of bounds, as he had done numerous times earlier in the half. He did not turn upfield, hoping to at least keep his team in field goal range.

Instead, Allen blindly flung one back across his body and directly into the hands of Packers cornerback Jaire Alexander. His runback, followed by two Rodgers completions and a 15-yard scramble, set up a 52-yard field goal that provided the kill shot to any hope of an upset.

By that point, Jackson had drifted off to read up on the afternoon’s baseball showdowns. Oscar was completely immersed in a computer-generated existence that involved not traveling through space, or battling 3-D assailants, but working in a virtual coffee shop.

“I don’t get paid enough for this,” he said repeatedly in the resigned voice of disgruntled employees everywhere, though he was remarkably polite to a virtual customer he had to scold for drinking directly out of the pot.

“I have to get my refills out of there,” he explained, before offering the offending avatar a consolation pastry as consolation.

Trying to swipe Oscar’s coffee pot would have been more fun than watching the second half. With no threat of a Bills running game to consider, the Packers went after Allen at high speed, dropping him six times in the final two quarters.

On one of the rare occasions he did not end up on the ground, Allen led Benjamin perfectly—into a knockout blow from Haha Clinton-Dix, WWM’S early-season favorite as the NFL’s Name That Is the Most Fun to Say. HaHa not only rendered Benjamin motionless for several moments (though the receiver was eventually cleared to return), but somehow came up with the ball.

By that point, the 3pm baseball games were getting underway. By the time Green Bay’s 22-0 pummeling of the Bills came to a merciful close, those much-anticipated contests were blowouts, too.

Buffalo’s dismal all-around performance (the Packers outgained Buffalo 380-87 until a meaningless late drive allowed the Bills and their quarterback to pad their stats) left more cynical fans free to return to thinking about which veterans to jettison and prospects in next year’s draft.