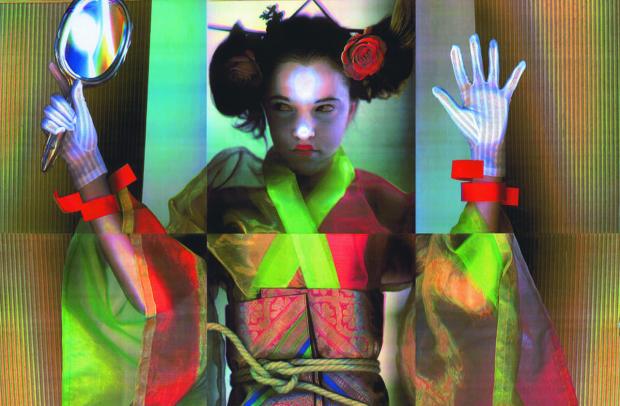 Pretty amazing. Works of over 100 artists—many represented by several items—in the CEPA copy machine art show, plus 100 art books at least—again, copy machine art—in the adjunct coordinated WNYBAC show, and not so much as a single buttock. (Though I didn’t see everything. I couldn’t page through all the books. Some of them in vitrines.)

The dual shows commemorate an unsung important technology for the production of artwork from the 1960s to the present, the advantages and appeal of which are well captured in the shows’ collective title, Fast, Cheap & Easy: The Copy Art Revolution.

Some of the artwork is pretty amazing, too. Some of it not so much. Some about what you might expect if you let an artist loose with a copier. Some extreme collage. Juxtaposed images, sometimes in a way that conveys some idea, notion, emotion even, but sometimes not. Lots of Dada. Lots of Fluxus. A lot of messy.

But some remarkably beautiful and interesting pieces as well, that you wonder how the artists made them, even with the help of a machine. As in several works in the CEPA street floor gallery. Two by collaborative artists Patti Ambrogi and Tony Petracca—one about leaves, one a dual portrait of the artists—seemingly in part paintings, in part drawings, and in part photos—listed as to media/technique as electrostatic toner transfers and pencil pastels. Some others by Charlie Arnold—darkish still lifes—hard to decipher just what’s in them, but then you see some shells—listed as electrostatic prints with white toner on black paper. One by David Hockney of almost startling simplicity—amid so much visual and technical complexity—depicting flowers, an apple, and pears, on a table. Listed as to media/technique simply as digital copy.

Other outstanding artwork by Nancy Topolski, whose works on show in the CEPA exhibit—she also has work at WNYBAC—are elaborate quilts, of fabric electrostatically printed with often enigmatic pictorial and non-pictorial abstract imagery, reiterated quilt pattern fashion over the entirety of the work, plus sometimes with further technique embellishments, such as embroidery. Several of these, in different areas of the exhibit. If you begin at the beginning—in the third floor passageway gallery—there’s a multi-page handout that lists artists and works, and the works are numbered—you first encounter—you can’t miss—one of the quilts displayed on a bed. With enigmatic dark imagery vaguely evocative of some communal ritual event, and similarly enigmatic title—something about a young child, a girl, beloved. Then toward the end of the exhibit—in the basement gallery—several more quilts, one with imagery repeating from the upstairs quilt, so connecting the works in a series, and two with embroidery lettering, telling a story, again enigmatically—not fully explaining, but explaining enough—of an horrific family incident, a crime. And one with an image of a child—a young girl, on a bed—seemingly asleep. But then on further perusal, beyond asleep, it seems. And a death bird image, like a death angel.

Among other CEPA exhibit works, Klaus Urbons’s minute-by-minute documentation of sequential clock readings over a twelve-hour period, and Marion Faller and Hollis Frampton’s critical comparison of a strobe photo of a golfer teeing off by photography technology pioneer Harold Edgerton, and magazine advertisement appropriation of the idea. While the closest thing to a buttocks work is Jürgen O. Alemania Olbrich’s series of shoe bottoms documentation of a dance performance on a copier.

And at WNYBAC, a spectrum array of books and quasi-books from painstakingly crafted and produced art books, to apparently more casual production zines, to copy art items sans genre, on topics ranging from personal to political to bizarre. Emily Good’s poignant little booklet of memories and meditations on her colleague and comrade in environmental activism, Kate Heuther, entitled On Losing a Friend. Louise Odes Neaderland’s series of zine political pamphlets, with titles like The Killing Machine: Kosovo 1999; Distress Signals; and Stealth. Some plastic-laminated instruction cards on a chain on How to Clean the Floor; How to Clean the Sink; and How to Clean the Toilet, by Marge the Volunteer Cleaning Martyr. And Mac Snyder’s boxed set of origami construction booklets with titles like How to Draw Ernest Hemingway; Great Dog Walks in Hampden, Connecticut; and Surprising Cows.

The exhibits’ handout includes brief overview segments on the historical development of xerography starting from physics basics—opposite electrical charges attract, and like charges repel—and the relationship of the new technology to social and cultural developments in the 1960s—Vietnam war and civil rights protests, the counterculture, pop culture, Punk—and aesthetic considerations regarding the new art production process. In a nutshell, “experimentation was at the fore, as there was no established aesthetic.”

Four curators involved in the two parts of the exhibit: Robert Hirsch, Kitty Hubbard, Klaus Urbons, and Tom Carpenter. Both parts—at CEPA and at WNYBAC—to continue through December 15.