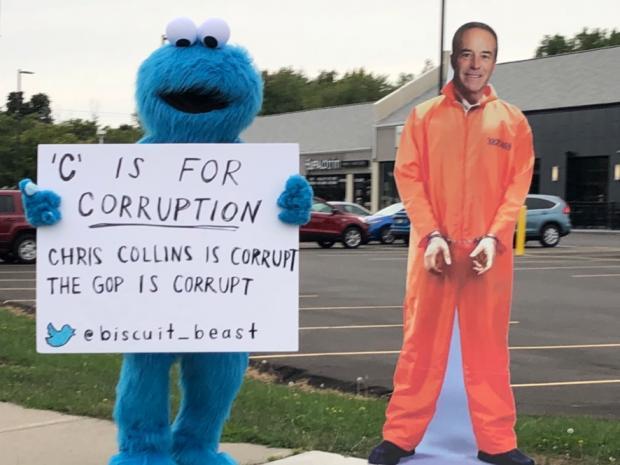 This is the second — and hopefully the last — epitaph I need to write on the political career of Christopher Collins. The first is here. His governmental record is, on balance, replete with abject failure. He was a disastrous County Executive who spent wildly to implement dubious corporate hocus-pocus, with little effect. He raised taxes and cut critical services on which citizens relied. He was openly hostile to Erie County’s cultural institutions and used his public office for private gain.

Yet after a humiliating defeat in 2010, he re-emerged in 2012 to narrowly win a seat representing the most conservative district in New York.

It is fitting that the resignation of former Representative Chris Collins (R-Club Fed) should come within a week after the House of Representatives formally commenced its impeachment inquiry into President Donald Trump’s various, sundry, and myriad misdeeds. After all, Collins was the first Congressman to formally and publicly support Trump’s candidacy, and remained one of Trump’s most steadfast Congressional supporters right up until last week. Birds of a felonious feather flock together.

It was last summer that Collins was first indicted for securities fraud and insider trading. I wrote then: [b]efore we go on, I have this to say directly to my Congressman: Resign. Now. We deserved better than you; we deserve better than you. You are in it only for yourself and your cronies, and that has palpably been true since day one of your benighted tenures in public “service”.

Despite efforts to challenge the government’s evidence based on the Speech or Debate Clause’s immunity shield, the government simply put forth a superseding indictment that avoided that pitfall. After a year of constantly gaslighting his beleaguered constituents by falsely proclaiming his innocence, Collins is at long last about to come clean, and receive the reckoning he deserves.

It wasn’t too long ago that Collins gave an interview to Channel 4 where he confidently predicted his exoneration on these insider trading charges. As recently as July 30th, Collins held a press conference and declared,

“I am innocent of the charges,” Collins said. “Why would I ever even enter a plea deal? I’m innocent.”

He called it a “circumstantial case” that prosecutors through “some tunnel vision decided to take.”

“I’m quite comfortable where I’ll be at the end of all this, which is not guilty,” Collins said.

It looks more likely that Collins clung to his Congressional office as leverage in his corruption prosecution.

Rather than recount the misdeeds of Chris Collins, the Congressman (try this and this), or rejoice in his self-immolation, let us take a moment to seethe.

After all, Chris Collins is a crook and a liar.

He used his public office for personal gain. He leveraged his influence in Congress to advance the interests of at least one business in which he owned a massive stake. He wasn’t looking out for his constituents — he was looking out for himself and his friends and family. Assuming a guilty plea, I hope he gets some time in prison and then moves to Florida and never darkens WNY again.

Guys like Collins (and there are many around here) think this is all a big joke — “public service”. They should be using their office to protect and lift up the weakest and most vulnerable in our community, but repeatedly and chronically use power to comfort the comfortable and further to afflict harm on the already afflicted. It would come as no surprise that the first and loudest Trump supporter goes down a convicted felon. The criminality and egotism was perverse and pervasive.

If he’s pleading guilty, then he’s known of his guilt all this time. He strung us all along — his supporters and detractors alike — proclaiming a non-existent innocence, predicting an exoneration that will never come. He stole from us our right to be represented in Congress by someone who had our back, who was looking out for our best interests. He stole that from us just as surely as he stole from the investors in Innate Immunotherapeutics to whom he did not provide that juicy inside scoop. He is a crook. He is a thief. He is a liar and a cheat and a scoundrel and a criminal.

A dozen years ago, he promised to lift Erie County out of the ashes of another, dramatic Republican financial disaster with promises of “running government like a business.” Did his Six Sigma black belt inform his decision to cut a plea now? Was it for the sake of efficiency? Did he finally confront his likelihood of success at trial and decide to streamline the inevitable process?

Last November, we could have elected a representative who actually cared about representing this constituency. We could have elected a representative who would look out for the little guy, rather than his millionaire buddies and his own wallet. And we came so close. But Collins convinced his Trump-supporting base that it was all lies, all a big smear, and that they would be better off with an indicted Congressman stripped of all committee posts rather than a Democrat. More lies. There was nothing so consistent as Chris Collins’ cynicism, and his reliance that his voters would always pick a party label over a candidate’s merits.

When his journey through the criminal justice system is over, Christopher Collins will always be a convict and a disgrace. He is now just another corrupt Republican politician representing the reddest district in the state to leave office in ignominy. The third in a row, actually.

The parade of Republican millionaires and clowns salivating over this vacancy will keep us entertained for weeks — especially given the massive cloud of corruption that is the Trump Administration. Every one of these power-hungry clones will trip over each other to pledge undying fealty to the Maximum Leader. As that party keeps sinking, looking for that elusive bottom, those of us who knew what Collins was this whole time will drink a toast to being right. We will also lament all of the lost opportunities we had to be properly represented.

You’re resigning? However will we know the difference?