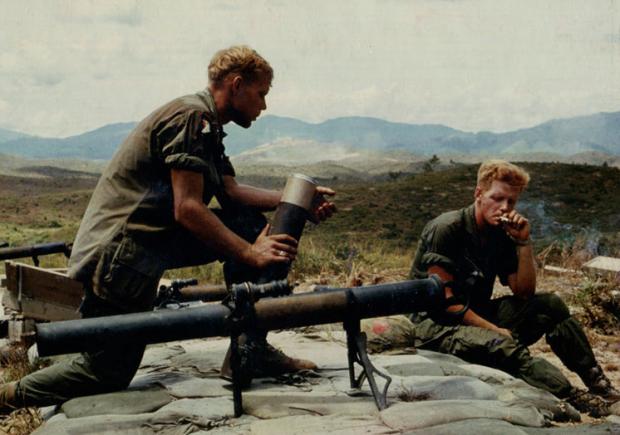 The current exhibit at the Kenan Center in Lockport consists of photos—hundreds of them—taken in country during the Vietnam War by Lockport area soldiers.

The draft war that gave us as its legacy the all-volunteer—all-testosterone—military. So the military and politicos can keep having wars like Vietnam. In which nobody has to sacrifice who doesn’t want to. Make the world safe for George W. Bush’s Iraq adventure.

But somebody has to sacrifice. And always the relatively few. Even in the Vietnam War.

The Kenan Center exhibit is a record of the sacrifice of those few. Amid the photos and sporadic text in the form of some letters home and some quotations from writers who wrote about their Vietnam tour, is a panel display of 80 names plus notations in the form of 12W 75. Being the section number and line number of the same name inscribed on the Vietnam Memorial on the mall in Washington, D.C.

And next to the panel display, two loose-leaf notebooks, each with a page for each of the men—hard to know whether to call them men or boys, mostly in their late teens or early twenties when they died—listed on the panel display. One page of “Virtual Wall” project vital statistics. Philip Jon Stemper, born 02/24/1949, died 04/01/1970, age 21. Start of tour: 09/13/1969, Casualty date: 04/01/1970. Location: Binh Thuan Province, South Vietnam. Casualty details: gun or small arms fire, hostile, died outright. Further details as to service rank, grade, unit, etc. The other page—other notebook—the obit story in the local press. Lockport Union Sun and Journal, April 7, 1970: “Spec. 4, Philip J. Stemper, 21…only child of Mrs. Philip C. Stemper…struck by mortar fire during an artillery barrage near Sang Mao…killed instantly…1967 graduate of Lockport Senior High School…had been employed at Harrison Radiator Division, General Motors Corp., as a production worker…was taking an engineering course at his home before enlistment…” With his picture, in uniform. He looks 17 or 18.

Not much in the photos about combat, naturally, but combat preparations. Building bunkers. Loading supplies. And tedium. Photos of service buddies, posed and unposed. On sandbag bunkers. Or just horsing around. Cache finds of enemy ordnance. Other enemy vestiges. A small mess hut, half subterranean and camouflaged. Some local fauna. A green bamboo viper suspended—not skewered—alive and well, it looks like—on a bayonet on a rifle. Helicopters. Aerial photos of patchwork quilts of farm fields. And big serpentine river. And Vietnamese. Old people and young. Many photos of kids. A posed photo of two boys about six, arms around each others’ shoulders. One looking at the camera, a faint smile for the photographer. The other looking off to the right, a little apprehensive. This boy’s shirt open at the top, revealing some sort of cloth amulet around his neck, on a string. Another small boy on the back of a water buffalo, controlling the huge horned beast with a flimsy rope bridle and bit.

Among the wall text, a passage from Everything We Had, by John Muir. (Maybe slightly self-contradictory, maybe not.) “We did a fine job there. If it had happened in World War II, they would still be telling stories about it. But it happened in Vietnam, so nobody knows about it today. Marines don’t talk about Vietnam. We lost. So it’s just wiped out, all that’s off the slate, it doesn’t count. It makes you a little bitter.”

The exhibit continues through October 11.