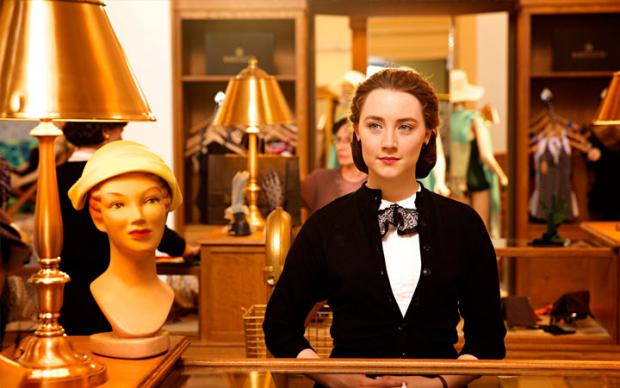 It didn’t draw a lot of attention what with all the other hoopla surrounding the 40th Toronto International Film Festival (which, to be fair, is almost entirely hoopla), but a program introduced this year may say a lot about the future of movies.

If you’ve never been, programs are how the festival is organized. Long-established ones included Galas, Contemporary World Cinema, Midnight Madness—you get the idea. This new one was called Primetime, and it featured a handful of new television series from around the world, at least the first episode or two.

It’s not unknown for product made for television to show up on TIFF screens. In many, if not most, countries of the world, television networks provide most of the funding for movies, so it’s a thin line to begin with. And there have been limited-run television series that have been brought to cinemas in other countries: Fassbinder’s Berlin Alexanderplatz, Lars von Trier’s The Kingdom.

But those were always exceptions that could be shown in their entirety. What was on display here were the openings of shows that, in the nature of most television, will continue to produce new episodes. The best-known was NBC’s Heroes Reborn; also featured were the second season of Les Revenants (The Returned) from France, and Jason Reitman’s Casual, which will premiere on Hulu next week. The program will presumably continue and grow in years to come.

It’s been clear for a while that television is where it’s happening these days. As a mass medium, movies seem to be turning more and more into entertainment for kids who want an excuse to get out of the house and congregate with their peers. If you’re an adult who wants well-crafted drama, you’re much more likely to get it in your living room than at the local multiplex. Or at least you’re more likely to be familiar with the options. And as we all know, once you get hooked on a show, you’ll stay with it for the next four, five, or however many years.

It seems to me that it’s only a matter of time until the cable networks and maybe even what used to be called the broadcasters start finding a way to get their product into movie theaters. Shows like Game of Thrones and Boardwalk Empire clearly have the production values to work on the big screen. And given that movie theaters do the bulk of their business on weekends, why not make a deal with HBO or Showtime to program their current series on weeknights?

But movies aren’t quite dead yet, and TIFF is the proof. As always, this year’s festival offered so many films—372 from 72 countries—that even dedicated cineastes who could afford to stay in Toronto for the entire 11 days were likely to miss something they wanted to see. As a member of the press, I had access to 25 or more screenings at any given moment, an organizational nightmare. The only rational way to approach the behemoth that is TIFF is to plan one day at a time, and to make sure you always have alternates: With so much to see, there’s no reason to stay with a movie you don’t like.

So as much as I wanted to see Our Brand Is Crisis, Bryan Cranston as Trumbo, Michael Moore’s Where to Invade Next, the six-hour Arabian Nights, a Hong Kong musical starring Chow Yun-Fat, talk-of-the-fest movies like The Wave, High Rise, The Lobster and Hardcore, and new films by Wim Wenders, Terence Davies, Nanni Moretti, Guy Maddin, and Jafar Panahi, it just didn’t work out that way. If the overall quality of what I did see was below average this year, that’s the way the dice roll: I can hardly say that the festival was bad when I only saw five percent of it.

TIFF enjoys a reputation as a launching pad for Oscar winners. If I was to pick a film I saw that was likely to be favored come the awards season, there’s no question that it would be Brooklyn. Nick Hornby adapted Colm Tóibín’s novel about an Irish girl (Saoirse Ronan) who emigrates to New York City in the 1950s, only to find that the auld sod retains a grip on her. So classically filmed that it would look at home in the middle of a Maureen O’Hara marathon on Turner Classic Movies, it couldn’t be any better timed to appeal to audiences in a world where half the population seems to be suffering dislocation. Expect it in theaters around Thanksgiving.

Toronto homeboy and one-time TIFF favorite Atom Egoyan (The Sweet Hereafter) has been suffering a rough patch for most of the last decade. That may be end with Remember, starring Christopher Plummer as a German survivor of World War II who leaves the retirement home where he lived with his recently deceased wife on a mission to find a Nazi who has escaped justice. It’s better scripted than the lurid tales Egoyan has tackled recently, and Plummer is always worth watching. A January release is planned.

Osgood Perkins, son of Anthony, makes his directorial debut with February, a horror film set in a girl’s boarding school. As heavily stylized as Dario Argento at his most feverish, it’s an exercise in filmmaking that you can wallow in even if you lose track of the plot, which is both subtle and rather slow-moving. Not for all tastes, but it could be this year’s It Follows. A24 has picked it up for distribution, but no release date has been set.

Even odder is the Danish comedy film Mænd & høns (Men & Hens, though for some reason the English subtitled version is called Men & Chicken). Mads Mikkelsen—barely recognizable as the suave star of TV’s Hannibal—plays one of two peculiar brothers who set out to find the father who put them up for adoption when they were infants. On the island where dad has a rundown research facility, they find three other brothers who make their own eccentricities look mild. It was written and directed by Anders Thomas Jensen, whose next project is the long-gestating film of Steven King’s The Dark Tower, on the strength of which it may actually show up in the US. The Nordic sense of humor is admittedly not for all tastes, but it’s certainly not the same old same old.

I was a bit less enthused about Legend, starring the seemingly omnipresent Tom Hardy as Ronald and Reggie Kray, the twin gangsters who terrorized London in the 1960s. Director Brian Helgeland (42) employs minimal digital trickery, relying instead on clever camera angles and stunt doubles to frame Hardy’s two distinctive performances. Too much of it plays like GoodFellas in London, though I guess if you’re going to ape a gangster movie you might as well chose a good one.  Originally scheduled to open this week, it’s been moved back to November 20, which indicates the distributor smells a hit.

Others: The Final Girls wants to be the new Scream, a parody of slasher movies set in summer camps. Yes, there were enough of those to form a whole subgenre, but you’d have to have seen a bunch of them to appreciate all the in-jokes here. We Monsters is a German drama with a plot similar to the Italian film The Dinner that just played at the North Park, asking how far middle-class parents would go to cover up a murder committed by their child. Couple in a Hole is a British drama about just what the title says, a middle-aged couple living in a hole—call it a small cave—in a forest. Why? It takes the movie to find that out, and while watching their survival efforts was weirdly compelling, it’s not a movie you’d ever want to watch twice. From Austria, Thank You for Bombing compiles three loosely linked stories about war correspondents serving in Afghanistan. It’s more bitter than the title indicates (I was expecting a satire on the lines of Thank You for Smoking), and a sequence depicting despicable behavior by a pair of American soldiers just about guarantees it won’t find a US distributor. Speaking of misleading titles, you might expect a film called The Apostate to be anti-religious in nature, but its look at an aimless young man trying to make an official break from the Catholic church reminded me of any number of lightweight existential comedy-dramas that were popular in Europe in the 1970s. (That’s  a good thing.)

As far as the bad ones, let’s not linger: Charlie Kaufman’s animated Anomalisa was a dreary and depressing disappointment (and I say that as a big fan of his Synecdoche, New York); the Hank Williams biopic I Saw the Light made one of the great figures in American music seem dull; Gasper Noe’s overlong Love did the same thing for sex—and in 3D, to boot; About Ray is a contrived mess that, despite having a transsexual teenager as its leading character, isn’t really about anything other than patting itself on the back for its teeth-grinding sensitivity.