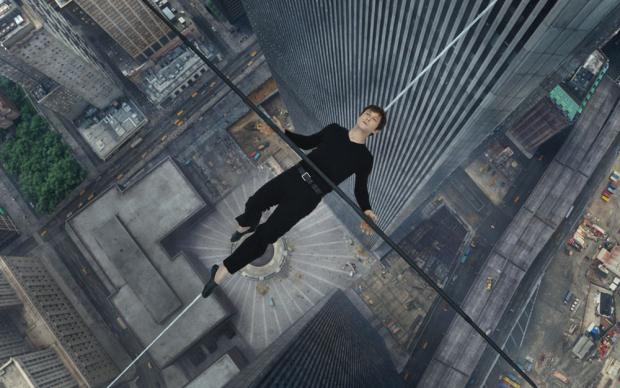 Thank god, I thought as the end credits for The Walk began to roll, that it was based on a true story. Specifically, the story of French tightrope walker Philippe Petit who, in August 1972, decided to practice his craft on a wire 110 stories above the streets of Manhattan. That was the height of the twin towers of the World Trade Center, which at the time were nearing completion. (You may recall Man on Wire, the Oscar-winning documentary from 2008 about Petit’s feat.)

The Walk was produced and directed by Robert Zemeckis, who likes to find uses for the newest and bestest in motion picture technology. It was presented in 3D IMAX, and that’s why I’m grateful that the story was constrained by the truth. Given that I share the stomach of a character in the film who says that he gets queasy on a footstool, I was squirming in my seat for much of its climax. I can only imagine how much worse it might have been if Zemeckis had been able to make up events.

Truth be told, my nervous stomach survived the film quite well. It’s not that Zemeckis doesn’t mind throwing the occasional height-based scare into you, but when he does he sneaks up with it and gets it over with quickly. The walk itself is, for the most part, serene, almost peaceful: The film tries as best it can (after having sufficiently exploited our fears) to enjoy the walk as Petit did, serenely and happily.

It helps that the walk comes as the climax of a very enjoyable film, a self-conscious throwback to caper films of the 1960s and New York-based movies of the 1970s. Petit, who was 25 at the time of his feat, is played by Joseph Gordon Levitt. Although the first half of the film is set in Paris, the dialogue is mostly in English—Petit insists on it so that he can practice before going to New York. Levitt’s French accent is rather fruity, but it suits the theatricality of the character, who has a lot of Charlie Chaplin in him.

(These scenes may remind you somewhat of Martin Scorsese’s Hugo, another technologically pristine 3D film starring Ben Kingsley, here in a grumpy-mentor role that would have been perfect for Alan Arkin.)

Zemeckis’s depiction of Manhattan when Petit and his accomplices go there is playfully informed by crime movies of the decade—it’s too bad Sidney Lumet isn’t around to appreciate the homage. (Several of the cops are named after characters from The Godfather.)

I have nothing bad to say about The Walk, which is pleasing in every aspect, but I will finish my praise with this: It’s a perfect movie for family viewing, suitable for kids but not made for them. If the family budget doesn’t extend to the pricey IMAX tickets, the film will open at other theaters next week (October 9).

Equally likable but certainly not family-friendly (as you can tell from its title), Sleeping With Other People is being promoted as a rom-com about a pair of sex addicts, a capsule description I was happy to discover was misleading if not entirely inaccurate.

Jason Sudeikis and Alison Brie star as Jake and Lainey, who meet up in Manhattan 12 years after they shared an intimate night in their college dorm. He is a womanizer unable to maintain a relationship, she is obsessed with a dull doctor (Adam Scott in a commendably charmless performance) with whom she cheats on every boyfriend. After agreeing that they have no chance as partners, Jake and Lainey agree to try to help each other through their romantic difficulties.

If you think you know where all this is going, you don’t. Writer-director Leslye Headland had the same problem with her first film, Bachelorette, which was avoided by audiences because they’d been told it was a Bridesmaids clone. But where that comedy tried to uncover every female fear and emotion that Headland thought movies have always avoided, Sleeping revives romantic comedy by populating it with fully fleshed-out characters. The stars are both sympathetic and charming, especially Sudeikis—who knew he had it in him after years of post-SNL comedies?

Likability is not a factor with Steve Jobs, at least not as he is depicted in Steve Jobs: The Man in the Machine, a new documentary by the iconoclastic Alex Gibney, who in recent years has outstripped Ken Burns on both quantity and quality of output. (Don’t confuse this with Danny Boyle’s upcoming docudrama starring Michael Fassbender as Jobs.)

Describing his subject as possessing “The focus of a monk with none of the empathy,” Gibney gives Jobs his due for his accomplishments along with dishing him for his failures both personal (abandoning a girlfriend when she became pregnant with his first child) and professional (Apple’s financial embarrassments, including poor treatment of Chinese workers and parking most of its money overseas so not to have to pay US taxes). Perhaps because this film follows his much-seen expose of Scientology, Going Clear, Gibney seems especially struck by the cultishness with which so many people seem to regard Jobs: The film opens with a montage of video tributes posted online at the time of Jobs’ death, including one from a boy who appears to be 10 or 11 who rattles off the name of every Apple device that Jobs oversaw. It will be at the Screening Room for a week (except Tuesday) beginning this Friday.

I went to see Stonewall contrarily determined to find something nice to say about it after all the bad advance reviews it has been getting. The mere prospect of a movie about the 1969 riots at a Manhattan gay bar that became the symbolic beginning of the gay rights movement made by the German producer-director known for such preposterous sci-fi hits as Independence Day and 2012 is so off-kilter that the movie had to offer something of interest, wouldn’t you think?

No such luck. Credit Roland Emmerich (who, like writer Jon Robin Baitz, is openly gay) with using his considerable film industry clout to make a film that is has longstanding personal meaning to him. But that such a canny manipulator of audiences could grind out a melodrama so grating and clichéd is hard to imagine. The mostly fictitious plot, centered on a squeaky-clean blonde Midwesterner (Jeremy Irvine) who moves to New York City after his dad the football coach discovered his “perversion,” essentially rewrites Hair, without the songs and with cross-dressers in the female roles. (The ending cribs from Spike Lee’s Do the Right Thing, though just as clumsily.) You have to feel sorry for the theater owners who booked this one sight unseen: here’s hoping they can unload it after one week of empty houses.