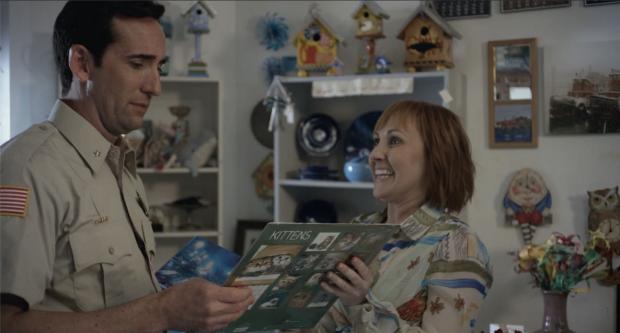 An unusual event that brings out the foibles of the members of a small community has been an irresistable comic premise for movies from Whisky Galore up through Local Hero and Doc Hollywood. Writer-director Daniel Keith shows that it’s far from exhausted with Love in Kilnerry, an independently made and distributed comedy that has been building audiences through word of mouth.

Kilnerry, New Hampshire is a small town that will not be getting any bigger. The residents don’t even have cable TV: they do have the internet, but it’s dial up. The economy’s major engine is a chemical plant that produces a compoubnd used in dog shampoo. Most of the locals are still there because they’re too old to pick up and move.

So when a representative of the Environmental Protection Agency calls for a public meeting, everyone assumes that he’s going to shut the plant down. Laying their fears to rest, he does tell them that it has been identified as producing a toxic chemical. However, his agency has found a way to neutralize it, by adding the experimental element P-172.

One small side effect, though. It seems that lab rats exposed to P-172 have displayed a marked increase in libido.

No one is more disturbed by this news than town sheriff Gary O’Reilly (Daniel Keith – say, where have I heard that name before?) One of the town’s younger citizens, he has stayed here because he likes its sedate nature and he would prefer it remain that way. But after he has to hose down a couple who are struck by the urge on a public street, he realizes that this community of codgers is about to kick up its heels big time. That includes at least some folk who realize they can live out some long cherished fantasies and blame it on P-172.

As comic situations go, this one is just about foolproof. Keith’s script can’t be said to wring out all the juice there is to be had in it; some situations drag longer than they need to, while others are underdeveloped. And given that the content is just over the edge of what would qualify for an R rating, you wish he had ventured a bit further in that direction.

But Love in Kilnerry has two big things going for it. The New Hampshire setting is gorgeous and put to good use. And the cast, largely from the world of theater, is filled with comically adept scene-stealers. Prime among these are Roger Hendricks Simon as O’Reilly’s father and Kathy Searle as Nessa, the charmingly maladroit shopkeeper who harbors a not-so-secret crush on the sheriff. Keith (who has also worked extensively in theater – Kilnerry started out as a play) clearly values characters over situation, and he has a cast that lives up to that trust. It would be hard to argue that Love in Kilnerry couldn’t have been better than it is. But it would be even harder not to enjoy it despite its flaws.