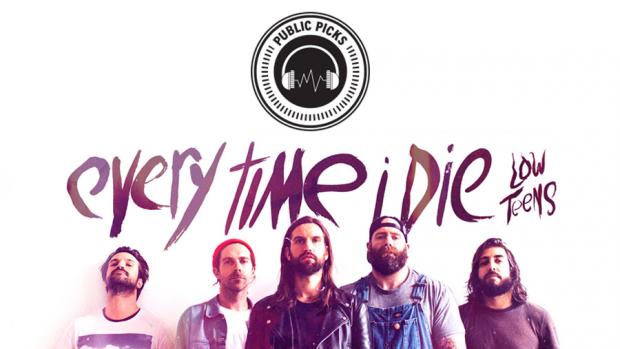 Few, if any, metalcore bands have been as consistent as Every Time I Die. Few can even claim a career as lengthy and fruitful. And it’s not even an overstatement to say that the Buffalo-based hardcore band have yet to falter across a 15-year, eight album career odyssey. It’s also safe to say that the term metalcore doesn’t even begin to describe the music on the band’s latest album, Low Teens, which was released earlier this week. Hardcore, metal, emo, and even some pop seeps through the relentless wall of sound on Low Teens. Through that also leaks frontman (and The Public contributor) Keith Buckley’s clever, cathartic lyrics. The album’s title purportedly refers to bitterly cold temperatures.

Consistency might imply a lack of evolution, but this is not the case. From the first discordant notes of the album opener “Fear and Trembling,” listeners will know they’re in for something that will at once feel familiar and at the same time test their limitations.

The urgent, unmerciful attack that begins on the opening track doesn’t subside for a moment through the next two songs, “Glitches”—one of the album’s singles—and the heavily personal “C++ (Love Will Get You Killed)” which Buckley says was written about the helplessness he felt during his child’s premature birth, (which is clearly a subject that affects the themes of subsequent songs as well). The record softens (if you can call it that) for “Two Summers” before plunging back into heavy metal territory with “Awful Lot”

“It Remembers,” which features vocals from Panic! at the Disco’s Brendon Urie, balances Urie’s emo vocals with fat, fat riffage. “Religion of Speed” teases out the band’s inner Led Zeppelin before punching a hole into hell with palm muted punk chords and hardcore screams from Buckley.

The album clocks in at 13 tracks and 44 minutes (the Deluxe Edition is six minutes longer, with two additional songs), and ends with the spiraling, desperate “Map Change” (which feels like the more appropriate finale, compared to the Deluxe Edition’s final track “Nothing Visible; Ocean Empty”). The track sends the listener off with a powerful yet despondent hook “I’ve weighed down the earth/Not sure I can take it,” with which the band’s knack for catchy riffage and emotional lyricism coalesce in a most transcendent way, cementing one of their sharpest, deepest records to date.