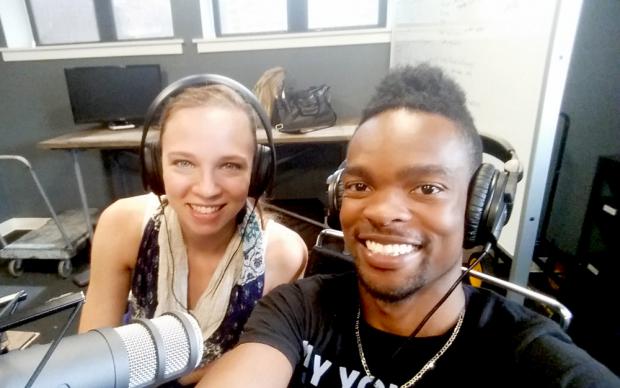 The Buffalo culture and business community has been dabbling these last couple years in the podcast world, a trend that has taken off worldwide in only the last decade. The medium now boasts myriad voices across a wide spectrum of topics and ideas, as well as an increase of usage by big media. According to the Pew Research Center, popular podcast hosting company Libsyn reports hosting 28,000 shows in 2015, with a combined total of 3.3 billion download requests. With the advent of new technology, more and more accessible by the layman who needs no more knowledge than how to connect a microphone cord and hit the record button, anyone with an idea and the desire to express it can now use this communication platform to find an audience hungry for conversation and community.

The latest kids on the local block are Buffalo millennials David Jackson and Elizabeth Fuhrmann, a young couple who comprise Half+Half, a podcast on the Trending Buffalo platform. The idea for their engaging relationship podcast first came to fruition this past May, when they decided that they wanted to delve into a creative partnership and develop a project in which they had equal stake and could maintain regularly, despite differing schedules. Working for Pegula Sports and Entertainment and WGRZ, respectively, Jackson and Fuhrmann are able to use their individual skillsets to come together and produce thoughtful and hilarious content on this relatively new media platform in Buffalo.

“The podcast originally was intended as a way to get our thoughts and feelings out and be our couple’s therapy, but now we realize it’s a stage for all couples. It’s turned into an outlet for other couples to not only learn about themselves, but also to talk about things in their relationship,” said Jackson. “We initially saw the podcast as a way to get ourselves out there, have meaningful conversations with interesting people, and to get Liz to talk more,” he said. The typically quiet Fuhrmann excels in this conversational format, holding her own with the naturally gregarious Jackson. The couple tackle and unpack difficult issues and describe personal anecdotes with organic ease, even sometimes finishing each other’s sentences in a natural way that doesn’t come off as cutesy or cringe-worthy.

Sam Brooker, a 23-year-old woman living in Alden has been friends with Fuhrmann since middle school and is enthusiastically supportive of her friend’s new project. “Dave and Liz are so true to themselves and they will not change just because they have a microphone in front of them,” she said. “The quirkiness, the humor, the tribulations, their individual personalities, none of that is omitted as they lay everything on the table.” Golden Groves, a 39-year-old man in Springville, has been friends with Jackson since their time working on the independent film Around in Circles. “I think that the subject matter is perfect for them and their chemistry is so strong you can hear it in every episode,” he said, another avid listener of the podcast.

Dan Vander Kooy, 32, was a recent guest on Half+Half, where he spoke candidly with his partner Lori about their romantic relationship after a 10-year platonic friendship. “There are a lot of relationship podcasts out there, but most of them are either styled after call-in, fix-it programs like Loveline or the Savage Lovecast or talk about relationships in an abstract way. The interview style of Half+Half makes the podcast feel more personal,” he said. “I really like the guests they have chosen, too, because opens the discussion to challenging subject material like race and gender.”

Although young in years, Jackson and Fuhrmann are able to deftly speak to the concerns of love and romance in the 21st century, a topic that is sometimes derisively brushed off, with older generations perceiving young courters as nothing more than a “hook-up generation.” Jackson addresses this perception and the technological environment that young people are forced to navigate, with little to no prior direction: “One of the biggest problems facing couples in the 21st century is technology and self-branding. Young people focus on their online personas on Facebook, Twitter, etc., which forces many people to become individualistic, without a focus on interpersonal communication,” he said.

Being young in the 21st century isn’t the only, or even the main, obstacle Fuhrmann and Jackson have to face, however. Utilizing this new creative pursuit, they decided to take to the airwaves to discuss the very real concerns they have as an interracial couple. In the third episode of Half+Half, the couple tackles the issue of “in-laws.” Although unmarried, the couple still must figure out how to navigate the stresses of the extended family and specifically the issue of race and religion in the family unit. “In our conversation, we address and try to explain how race still presents a problem in our modern society,” Jackson said.

Trending Buffalo’s Brad Riter, 41 and married with two children (with a third on the way), said that, although he might not necessarily be the audience demographic for the podcast, “The stories they share and the questions they raise strike a chord.”

“My favorite thing about talk radio is the intimate relationship between host and listener—and podcasting takes that to a different level. We’re not just talking about a show that comes on when you push a button in your car. You can’t just stumble across it—anyone listening has gone through the process of seeking out the content, choosing it over literally infinite competition,” Riter said. “Once the listener is there, it’s up to the hosts to justify the effort, and Dave and Liz are pulling it off.”

New episodes of Half+Half drop every Thursday and can be found at Trending Buffalo, iTunes, or your preferred podcast app.