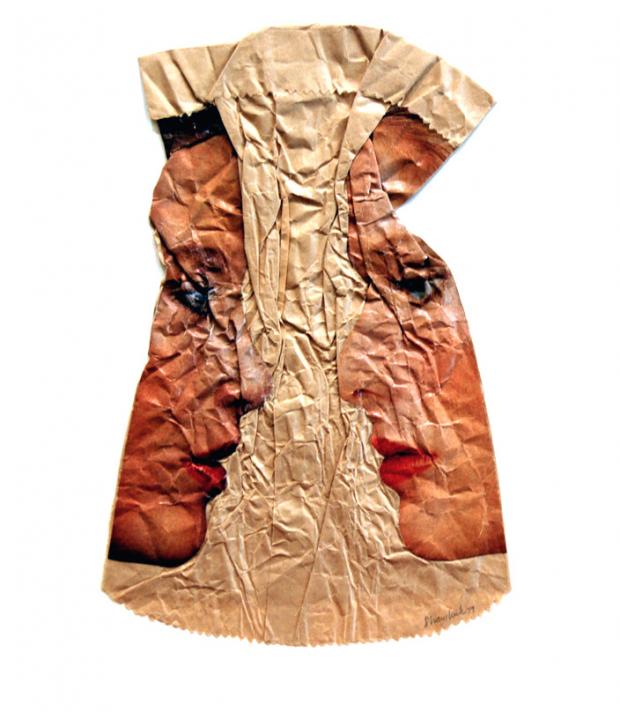 The retrospective sample of the life’s work of Victor Shanchuk, Jr., now on show at Artists Group Gallery, is a rainbow of colors and wide array of genres, media, styles, techniques. Painting, drawing, photography, collage, figuration, abstraction, and much overlap. And an overall purpose and purview—it seems—of recapitulation and further examination and exploration of the main course of development of modern art, from initial breakup of visual imagery in impressionism, to post-impressionism, to cubism, and ultimate dead end mode and manner—because nowhere further to go down that road—abstract expressionism.

And copious experiment. “All my life—in all of my work—I’ve attempted to think outside the box,” Shanchuk says. “Find new and different ways to make art.” Innovate. Create.

A large selection of what he calls “Lift” photographic works. They look like photos on ragged textile. Done with a gum acetate press-applied to imagery on clay-based paper, such as quality magazine pages. The paper and acetate combine is then placed in a water bath, dissolving away the paper, leaving the image—or portion of it—on the acetate. The image is then transferred to photographic paper, sometimes as a contact print, sometimes by projection via photo enlarger. Or more usually several images as overlays. He likes visual ambiguity, ambivalence.

Another series he calls “Chemgraphics.” Involving direct painting or drawing with photochemical materials on photographic paper. Nudes and partial nudes. Some homage to Michaelangelo here. Portions of the figure of Adam supine on the Sistine Chapel ceiling.

Shadows are a regular motif. Two different “Shadow” series of artworks, one of photos, one of paintings. Some of the paintings—specified homages to Seurat—in small dots pointillist mode. Like small area segments—details—of Seurat paintings, slightly blown up. Some others—specified homages to Matisse—are in larger dots fauvist mode. About Matisse’s colors, not his imagery. But both subseries, abstract. So hard to see in what way—if any—they are shadow works.

The Seurat and Matisse small dot and large dot abstracts then plausibly also depictions of shadows, via pointillist and fauvist techniques.

In addition to the Seurat and Matisse specified homages, other unspecified homage works to these and other key modern artists occur among the paintings. Several works in large single-color facets reminiscent of Cezanne. The radical advance in the project to break up the surface of the painting he was exploring in works such as Pool at Jas de Bouffan and Morning in Provence in the Albright-Knox collection. The primacy of painterly gesture over pictorial illusion. An unspecified homage to Matisse work entirely in tonal variations of yellow presents just perceptibly within the relative monotone—partly by subtle tonal shadings, more by brushwork textural effects—two subject nudes, one in the background, one more prominent, in languorous odalisque poses. Reminiscent of numerous Matisse paintings, including La Musique at the Albright-Knox.

Another series of pinhole camera nudes. Another of portraits of subjects transformed under transparent but distortive plastic Halloween masks. Another of crushed beer or soda cans, or crushed brown paper pags. Street detritus. Stuff we overlook but depend on—pre-discard—in our everyday lives. One of the crushed bags works is painted with two profile-view portraits. It looks Egyptian somehow. Coptic. Because of the profile views. Because of the lifelike realism and delicacy of the portraits.

The oldest artworks in the exhibit are some lens camera straight photos of the Darwin Martin House and grounds as incipient ruins, and a student oil painting from the artist’s Buffalo State College days, all from 1959. In the meantime, Shanchuk taught art for thirty-six years in the Buffalo Public Schools, and currently teaches at D’Youville College. The title of the exhibit is “A Life’s Work.” From the variety of work and scope of interests of the artist, it looks more like several lives’ work.

The exhibit continues through September 29.