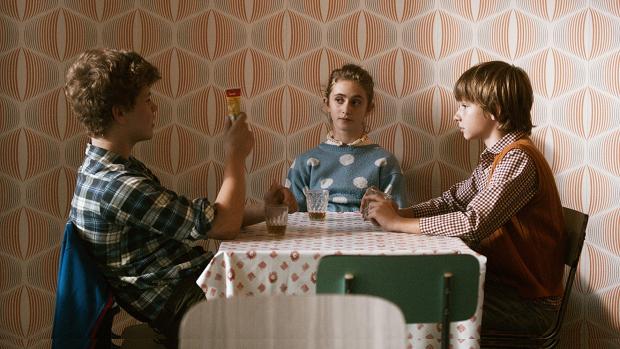 I can’t claim to be terribly knowledgeable about Eastern European filmmakers, but I generally enjoy what films I see that come from that part of the world. And I have long been a fan of the work of Czech director Jan Hrebejk, whose 2000 Divided We Fall received an Oscar nomination for Best Foreign Language Film. (It might well have won, too, had it not been up against a movie that was more widely seen than any in that category for years before or since, Crouching Tiger Hidden Dragon.)

Hrebejk’s new film, The Teacher, is named for Maria Drazdechova (Zuzana Mauréry), a middle-school teacher in a suburb of Bratislava in the mid-1980s. The first thing we see is her beginning the school year by asking each student to stand and tell the class what his or her parents do.

What might seem like a way of personalizing her students to each other, though, has an ulterior motive. A widow, Maria has become accustomed to getting favors to help her through life’s difficulties, those pesky problems like cleaning the apartment or doing the shopping. Perhaps this started innocently enough. But by the time we meet her, she has it refined to a system. She keeps a database of skill sets so that she knows what every parent can do for her. Nor does she ever have to ask directly: She’s well enough known that hints are never misunderstood. Obliging parents are rewarded with hints to help their children pass their exams. Those who are less helpful find that their kids’ grades start to slip. And, of course, it helps that Maria is the school chairman for the Communist party: Though her fellow teachers loathe her, they afraid to say anything against her unless someone else does first. Even better, if a lot of people speak out first.

The Teacher mostly obviously works as a parable about the failures of a social system that can be played for private benefit. Maria’s growing greed turns her community into a zero sum game, where those who benefit do so at the expense of others. But don’t be fooled by the setting into thinking that this simply a post mortem dissection of Soviet socialism: Working from a script by his longtime collaborator Petr Jarchovsky, Hrebejk portrays a world in which communal values value if at least half of its members benefit from its corruption.

Opening Friday, The Teacher will play for one week at the North Park.