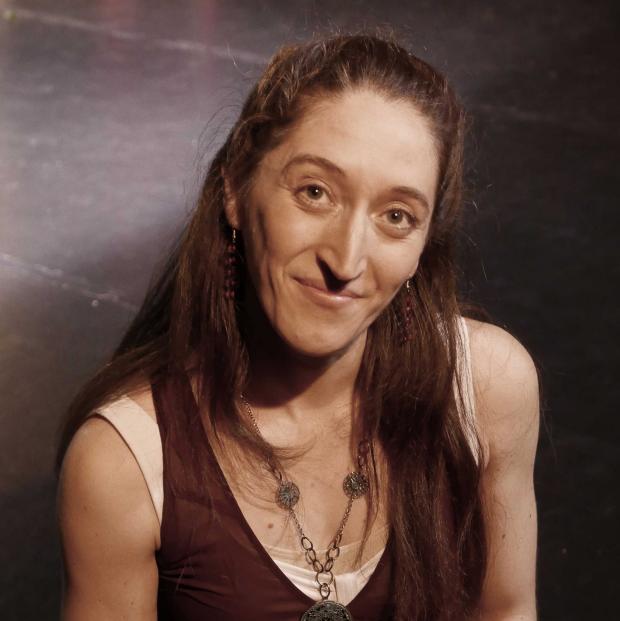 Christina “Nina” Vega-Westhoff is a poet, teacher, translator, and aerialist living in Buffalo, New York. After moving from Tucson, Arizona she’s become a teaching artist at Just Buffalo Literary Center and a dance trapeze instructor at the new Bird’s Nest Circus Arts center. This week she’ll read as part of Just Buffalo’s Studio series alongside author Brenda Iijma and Aaron Lowinger, an editor at The Public this Thursday, September 28 at the Just Buffalo Writing Center (468 Washington St, 2nd floor). The theme of the event is “eco-poetry” so this week we talked to Vega-Westhoff about what eco-poetry is to her, how movement and poetry relate, and delicate, or not so delicate, art of translating poetry.

You teach poetry in Spanish and English. Do you feel that the art comes across differently depending on the language?
Yes. I don’t know if I can articulate it, but yes different qualities are emphasized. We pick up on the way languages affect thought. This summer I was reading an article by the ecologist or biologist Robin Wall Kimmerer and she has an essay called The Grammar of Animacy. She’s talking about how different languages have verbs and pronouns for living beings. We might call a plant “it” in English and other languages might have a different pronoun or verb there that would be used specifically for plants. That’s like a small example, and that’s not specific to Spanish and English.

How old are the students that you teach Spanish and English poetry to?
From preschool to adult. The younger ones are so amazing and they require so much energy. There are different ways of engaging people, which are not necessarily specific to their ages, but being aware that sometimes maybe someone who looks like they’re not engaged—isn’t making the verbal cues you might be expecting because of whatever your presumptions are—they might be incredibly engaged.

I would think that poetry would be especially difficult to translate because there is so much intimacy and there is so much to be translated. Even if you’re reading it in your own language you can still be kind of translating it.
Yeah, definitely. A lot of times the act of translation is the act of understanding something, even if it’s just in one way each time coming back to it. For me at least, translation happens in many processes. There’s the first draft that’s maybe trying to just get one particular meaning and then the next draft something different. It happens in layers.

The theme of this Studio event at Just Buffalo is eco-poetry. Can you tell me what eco-poetry is to you?
I can try. Eco-poetry is getting through ecology. There are connections to place and people and to whatever our webs are. People think of environment—I think of poets like Ed Roberson. You can talk about ecological justice. I guess people like poetry that is engaging with the current situation of the world and our local place especially. How does language inform existence? What does language have to do with how we’re thinking? You were asking about the difference between Tucson and Buffalo—how does the place have to do with how we’re thinking and engaging with each other?

What are your thoughts on Brenda Iijma as a poet?
I’m so ecstatic to get to read on the same night as her. She’s really incredible with what she’s bringing to the page and the conversation. I think a lot of awareness and ethics. We share an interest in the world that we live in and recognizing many components of it.

You are a practicing aerialist and yoga teacher and you’re working with the Bird’s Nest. How did that come about?
I had seen my first aerial performance in Panama, where my mom is from. It was an outdoor dance festival and there were aerialists that were suspended between buildings on a wire. They were activating that space. I thought it was amazing that you could have public art like that. The interest started there. When I lived in Tucson, I lived close to a studio that had aerial dance and modern dance. I went there and tried it. So I started that and that’s when I was doing an MFA program for poetry. I was kind of learning aerial at the same time that I was focusing a lot on my writing and trying to be a better reader of poetry. So I started to think of the two things as related. Before I moved here I had done some training in aerial yoga and yoga and had been practicing yoga for a long time. When I moved here I found some places where I could tap into those things. So I started teaching at a local studio and performing with them. In the last year, you know the Bird’s Nest is pretty new. It’s a very exciting space to be a part of. So I started teaching dance trapeze there. They’re still working on getting their studio ready to have aerial yoga and yoga. This summer we did an Infringement show with the poets Joe Hall and Cheryl Quimba who are also teaching artists at Just Buffalo—and there were scientists involved and activists and musicians and other aerialists—so it was kind of a poets theater aerial piece. Being able to do that has been especially exciting.

How do poetry and movement relate to you?
In a lot of ways. Through sound. I think often of one idea of language coming through chant and dance as its origins. The history of both has always been connected. And of course there are practices around the world doing both things simultaneously. For me, on the page, I became interested in how aerial is specifically this form that goes beyond the ground into the air—how something like that can be on the page. For a long time I’ve tried connecting those through poetry.