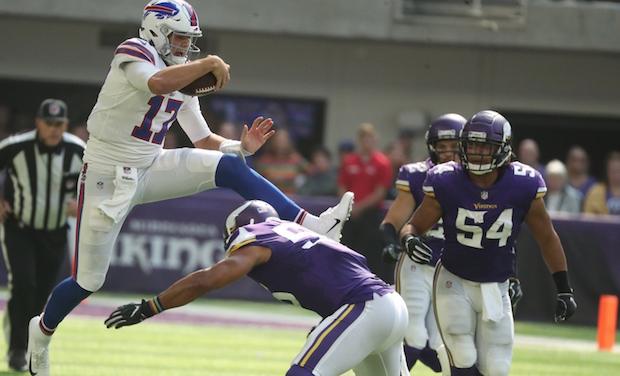 It was the perfect spot to watch what figured to be, until a little after 1pm Sunday, another painful game in a rapidly darkening season.

Where better than to take in such a grim spectacle than a place called Sunny’s?

“Sunny’s, you smiled at me and really eased my pain,” Tim, a longtime We Want Marangi contributor, sang repeatedly on the way to Batavia, where the restaurant is located the otherwise largely dormant Genesee Country Mall.

While Tim slightly modified the lyrics, Bobby Hebb’s 1966 ode to optimism fit the day nicely. The sun was shining, and having watched the Bills get splattered the previous two weeks stripped their visit to Minneapolis to face the Vikings, a popular Super Bowl favorite during the preseason, of any real expectations among the regulars gathered around the semi-circular bar, as well at least one local church.

“The minister said, ‘I know you’re all in a hurry to get home and see the Bills lose,’” said Mrs. Martin, who nonetheless wore her team’s sweatshirt for the occasion.

Most of the football world agreed. Buffalo took the field as a 17-point underdog. No team so disfavored by the oddsmakers had won a game since 1995. The Bills had been trounced by an aggregate score of 78-23 in their first two games, including a combined 54-6 in the first half.

The perceived gap between the two starting quarterbacks accounted for a chunk of that mammoth point spread. The Vikings signed Kirk Cousins to a $28 million contract in the spring, expecting the former Washington star to put a team that reached last year’s NFC title game over the top.

Josh Allen, meanwhile, was making the second start of his NFL career, the first in the hostile environment of a road game. Though Allen had displayed glimpses of why Buffalo management traded up twice to select him seventh overall in the draft (and looked downright spectacular compared to his predecessor, Nathan Peterman) expecting the raw rookie to outplay a Pro Bowler who torched Green Bay for 425 yards and four touchdowns a week earlier seemed like an incredible stretch.

That much became clear quickly. On the opening possession, Allen – operating without injured franchise back LeSean McCoy – completed four of five short passes. He capped the drive (which got a huge boost from two 15-yard penalties on Minnesota, one of which wiped out a third-down sack) with a diving, pylon-swiping 10-scoring run, his first in the NFL.

Cousins, meanwhile, started his day by getting sacked and fumbling on Minnesota’s first two possessions. The Bills recovered both, capitalizing with a field goal and Allen’s 26-yard touchdown strike to tight end Jason Croom.

Suddenly, the 17-point underdogs were leading 17-0 with more than five minutes remaining in the first quarter. Tim and I had not yet finished the wings we had ordered before kickoff. Since the Bills were involved, even such a hefty margin was not a universal cause for celebration.

“It’s early,” said Gary from his seat at the bar, more than a touch of skepticism in his voice.

Instead of sitting on the lead and hoping to run out the large amount of time remaining, as has been their approach through recent history, these Bills kept attacking, though. On their next possession, Sean McDermott eschewed the easy field goal on fourth down, with Allen stretching across the goal line to make it 24-0.

The next Bills drive, highlighted by Allen’s hurdling run to pick up a third-down conversion, resulted in a 50-yard Steven Hauschka field goal. The same team that gave up an average of 27 points in the first half now led 27-0.

The pleasant lack of drama allowed us to take in the ambience at Sunny’s. Tina worked there for 22 years before buying it from her old bosses a decade ago. It has a distinctively 1970s feel, in no small part because the décor, while well-kept, is the same as when the place opened in 1976.

“We have tried to keep things mainly the same, while updating with new food items and such to keep up with changing trends,” Tina said.

The time-capsule effect is enhanced by the lack of interior windows (it is built into the back of a mall), and some older-school menu entries like liver and onions, as well as a tripe special on the third Wednesday of every month.

“It’s usually a good turnout all day,” she said.

We stick to more traditional bar fare. The wings were excellent, meaty with crisp skin and well-sauced, as were the nicely pink burgers.

At halftime, we adjourned to another Batavia landmark, Kelly’s Holland Inn. With an interior strong on paneling and plywood, an old-timey bowling game and a bartender whose name is Bob Dixon, so everybody of course calls him Wilson, we watched in comfort as Buffalo’s defense continued pressuring Cousins, limiting the Vikings to 69 total yards and zero points through three quarters.

By the time Minnesota finally managed a touchdown with 3:03 to play, we had discussed most of the pictures hanging behind the bar with Wilson and the regular patrons, as well as the unexpected resurrection of a Buffalo football season that seemed, at best, deep in a coma several hours earlier.

This Sunday’s trip to Green Bay, which previously shaped up as a second straight inter-conference road drubbing, now looks like a chance to build on one of the biggest upsets in franchise history. Both for Allen and the team that, after that performance, is quite clearly his.