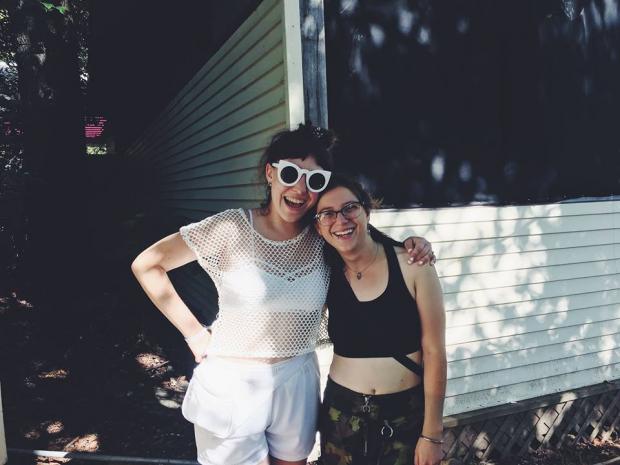 There’s a stacked weekend of events coming up here in Buffalo for women and non-binary folks who are trying to break into the electronic dance music scene. The weekend, sponsored by Block Club and organized by Sherri Miller and Alicia Greco, will feature a workshop, a late-night party at the Underground, and an outside daytime party.

The centerpiece of the weekend for Miller, a Buffalo resident, and Greco, a Buffalo ex-pat, is the Walking & Falling DJ Workshop and Mentor Program, which both artists have attended in Chicago and decided to bring to Buffalo.

The Walking & Falling workshop, which takes place on Saturday, September 29 from 1pm until 5pm, will be specifically geared toward women and non-binary folks. A select few participants will receive a mentorship-like experience with direct one on one support and instruction from a group of women and non-binary artists including Greco, Miller, Lydia Wrobel, and Abbey Madigan Morejon, during which the participants will learn basic turntable, CDJ, and laptop DJing skills as well as beat matching and mixing basics. Then the group will hold a free-to-the-public DJ workshop for women and non-binary folks who are interested in learning the basics of DJing and networking with local artists. The workshop will also include a panel discussion with the Walking & Falling mentors.

Then, that night, Greco and company will host a party at the Underground Niteclub featuring techno and house artists from New York City, Chicago, and Buffalo including Akua, Kiddo, and Mutalism. The party is presented by Daisychain, the podcast run by Greco that focuses on women and non-binary DJs.

Finally, on Sunday, September 30, there’ll be an outdoor, daytime party held at Georgette (69 Elmwood Avenue), featuring many of the mentors and other artists, spinning music from 1pm until 7pm.

Greco, who grew up in Syracuse, went to school in Buffalo, and now lives in Chicago, took some time this week to talk to us about the workshop, what inspired her to dive into the sometimes overwhelming world of DJing, and how electronic music has helped her heal.

What led you to Walking & Falling?
In March 2017, Sassmouth, Sam Kern, who DJs in Chicago, invited me to be her mentee for Walking & Falling Chicago. I stayed with Sam for the whole week, did one-on-one lessons with her and with DJ Kiddo. I learned how to beatmatch—and learned not just the basics of DJing, but they brought this really empowering community into my life. At the time I had really bad self-esteem and self-confidence and had wanted to learn to DJ, but couldn’t quite find the right environment to make that happen because it definitely is a bit male dominated—there are a lot of women doing important things, but it can be ridden with gatekeeping and general bad energy when trying to learn. But I formed really amazing relationships and came back to Buffalo with this insane boost of confidence and had all of these ideas of things I wanted to do. I ultimately decided to move to Chicago because the workshop changed my life so much and now I’m here.

How does it feel bringing this thing to Buffalo now?
It feels awesome. It feels really exciting. The weekend wouldn’t be possible without Sherri. She is so full of amazing ideas, passion, and we’re on the same wavelength. I’m very lucky to know her and Buffalo is so lucky to have her. For me, it feels like a return to the source. I care so much about the City of Buffalo and the scene there. I didn’t leave with any sort of bad taste in my mouth. I see a lot of women and queer people that are out at parties and dancing, but maybe they want to learn, maybe they want to create, maybe they want to throw parties too. There are women that are DJing and throwing parties that have the knowledge and can spread that on to other people.

Talk a little bit more about the other folks involved in these events you’re doing here in Buffalo.
Myself and Sherri Miller are the two people who are really organizing things. The other mentors include Lydia Wrobel, and Abbey Madigan Morejon. We’re the four mentors and we each have people who we are mentoring. We’ll do one-on-one lessons with them on Friday. Then Saturday is when the workshop happens and that’s going to open up to the public, so people can come, observe, get their hands on records, get their hands on CDJs, and get some pointers and tips from Sassmouth, Kiddo, and Jenny Arcade. Then there will be a panel discussion during which we’ll talk about the trials, tribulations, and triumphs in dance music.

You’ve kind of touched on this, but why do you think it’s important to have an event specifically geared toward women and non-binary folks?
Women and queer people can have a difficult time hedging their way through and it can be a little disjointed trying to create that space. I think it’s important to have things like this because there’s very much an energy that is necessary—not to say that men don’t have this energy, because I have met many amazing men that are very much on the same page, but having that central focus allows for a certain level of comfort for people to really be open to learning and making mistakes. Walking & Falling actually comes from this Laurie Anderson track. The lyrics are basically talking about how you can both be walking and falling at the same time and as you’re going forward you’re also falling, you’re also making mistakes, you’re catching yourself from falling, and continuing to keep walking. The whole process of the workshop encourages making mistakes, learning from your mistakes, and not getting too caught up along the way.

What are the biggest challenges folks face when learning these skills?
Nerves. It’s nerve-racking. You’re definitely making yourself vulnerable by DJing. Whenever you learn something new, it’s opening yourself up to the process of making a mistake. It’s important to have that space where you’re being welcomed to learn. I think that’s the biggest challenge. I still have that challenge. When I first started at the workshop I was afraid to even touch the record. Now I’m so much more comfortable with it and beatmatching has become more natural. To me that’s the biggest hurdle.

What inspired you to learn to DJ?
I’ve been involved with the dance music scene for 10 years. During that time I’ve always been a dancer, but I’ve also been standing behind the booth watching my friends DJ. There’s something therapeutic, it seemed. I like the idea of taking tracks that I love and putting them together in a cool way so maybe other people can love them too. So many DJs have really saved me and I thought maybe I had some tracks that could really help someone else. And it’s fun. There’s something thrilling and exciting about mixing music together. Even when I’m home alone, it’s my form of therapy.

When you say it’s helped you and it’s a form of therapy, what do you mean?
I’ve had a few mixes released, and for some of them I’ve had a very specific concept in mind when I do it. One that I could mention is the mix I did for Walking & Falling. I used to have really bad panic disorder. Like debilitating panic. Walking & Falling helped me break out of that cycle. So I felt like, with my mix, I wanted to tell that story through a sonic narrative. With my track selection and the way that I mixed things, I tapped into that pain that I experienced for so long, and I almost worked through it while I was DJing. I’ll listen back through it and it’s wild to me that I can hear myself healing while I’m mixing. Maybe that’s waxing poetic, but for me, that’s just want it does. Everyone’s experience is so personal and different and that’s also the beauty of it.

Tell me about Daisychain.
Daisychain was an idea I had while living in Buffalo. I wanted to get some women, and non-binary, and queer folks together and kind of form our own coalition. Then I moved and I turned it into a podcast. I started the podcast in January. It’s been a weekly podcast; every Tuesday we have a guest mix from a woman or non-binary person. So far they’ve all been either friends of mine or DJs who have had a very strong impact with me. It’s been so rewarding. It’s become more than I could have hoped for.

Tell me about the event on Saturday.
Saturday will be kind of the first official Daisychain party. I really wanted Sherri to open the night because she’s such an important person in my life and to the whole process and this whole weekend. She’s been working so hard and does so much, I knew she’d be perfect for it. Kiddo will be playing also. She’s one of my mentors. She DJs really killer techno. Then Akua, she’s from New York City, where she does a lot of awesome things.

In tandem with next week’s Walking & Falling workshop and Daisychain party in Buffalo, an extraterrestrial garden party will take place featuring many Daisychain links from Buffalo, Chicago, and Columbus. Family friendly! Treats provided by @breadhive. Rain or shine!

Then the weekend wraps up on Sunday with a daytime party at Georgette.
Yes. Basically I thought to call it Gratitude during a Western New York party weekend. Sherri and I were at the Signal > Noise / Sole Rehab party the day after Strange Allure and I was just feeling really overwhelmed with love for my friends and what this music does for us. Sherri found the space, which looks so amazing and cute. It will be family friendly, held outside in the garden and we’ll move inside if it rains.

What’s in the future for you?
I plan to work with even more women and non-binary folks to have more Daisychain parties in other cities to further expand and connect this supportive and encouraging community.