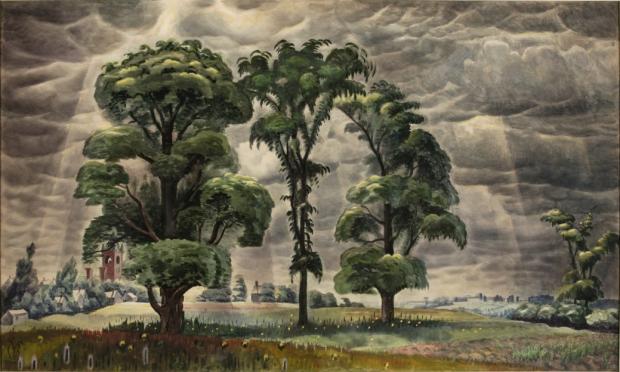 The works of Charles Burchfield current exhibit at the Burchfield Penney Art Center consists entirely of paintings and drawings of trees. The exhibit is in conjunction with renewed attention and commitment to the Buffalo State College campus-extensive Maud Gordon Holmes Arboretum, established in the early 1960s—original Burchfield gallery director Dr. Edna Lindemann was a prime mover in the establishment of the arboretum—but neglected in recent years due to a plethora of inimical conditions including “weather events, disease, insect infestations, construction projects,” etc. A sign in earnest of the renewed attention and commitment is a handsome and informative new map—two maps actually, geared to walking tours of the campus—pointing out and briefly describing arboretum features in the Rockwell Hall old campus area, and the west end rest of the campus.

The feature artwork in the Burchfield exhibit is a large watercolor entitled The Three Trees, three towering American elms in an open field area beneath a dark canopy of what look like major storm clouds, but with rays of sunlight piercing through, creating a kind of open-air proscenium stage set to best show off the magnificent elms.

The painting was virtually a life-long project for Burchfield. He started work on it in the early 1930s, but didn’t finish it until 1946. But the idea goes back to youthful memories of the three trees, which grew in Salem, Ohio, where the artist was born and grew up.

Wall copy points out that by the time painting was finished, the actual three trees were destroyed as the result of a tornado and a construction project—much like the fate of so much of the Buffalo State arboretum in recent decades—and how over the same period the American elm species was decimated by Dutch Elm disease, a fungal infection spread by beetles.

But with the help of the new map, it’s easy to find the single survivor American elm example on the Buffalo State campus. Located hard by Campus House—one of the original college buildings, formerly the college president’s residence—across Iroquois Drive from Rockwell Hall. While directly in front of Rockwell Hall, flanking a central large English Oak, are two hybrid elms, trees genetically modified to be more resistant—if not entirely immune—to Dutch elm disease.

Among other works on show, a series of sketches seeming to afford an addendum note on the much-remarked matter of Burchfield’s synesthesia, that is, basically, the ability to perceive the same phenomena via several senses. A semicircular array of trees, all of about the same size, in a small clearing in a woods. Among the artist’s handwritten notes to himself at the bottom of several of the sketches, one seeming to describe the particular configuration, in the particular setting, as a “wind harp.” Surely he meant what would be more properly called an Aeolian harp, a musical instrument played by the wind. A stand of trees—in a configuration a little like you might see organ pipes—that when struck by the wind resounded like the strings of an enormous string instrument. Like a harp perhaps, but not plucked like a harp, but struck, like a piano.

Highlight listings on the arboretum map include three dawn redwoods in the area east of Ketchum Hall. The map descriptive copy calls the trees “living fossils,” noting that redwoods “grew in North America when dinosaurs still roamed.” And on the north side of Ketchum, three small cherry trees, one of which is dedicated to arboretum eponymous Maud Gordon Holmes and one to arboretum idea champion Edna Lindemann. Also—in several locations, west of Rockwell Hall, and west of Moot Hall—beautiful Japanese Zelkova. Beautiful in name and nature alike.

Back in the gallery, in the little Burchfield Rotunda—adjoining the Burchfield exhibit rooms—amid photos and descriptive material on the creation of the campus arboretum—are some pictures of Charles Burchfield, shovel in hand, planting a little tree as part of the arboretum.