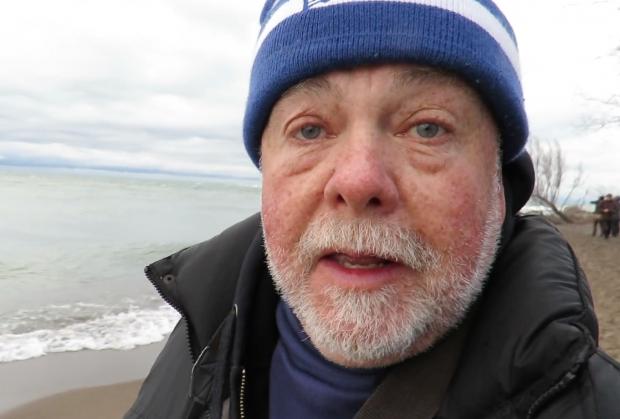 After a summer of not being on the electronic pages of The Public, we are back!

This is a compilation of bird scenes mostly shot during the spring of 2016. It shows some of the many beautiful birds that migrate to, from, and through the Great Lakes region, and including Buffalo, our shorelines, and our adjacent areas. The film begins with a poignant look from Point Pelee Ontario, the southernmost tip of Canada, which juts out into Lake Erie across from Detroit.

Here millions of migrating songbirds make the flight across Lake Erie and land, often exhausted, hungry, but only partway on their journey north. This day profiled in the video, is a stormy spring day and the birds arrive in waves. They are not camera shy. Many of the other scenes depicted in the video take place along the Buffalo shorelines including at Times Beach, Tifft Nature Preserve, and at Forest Lawn Cemetery in Buffalo. These places are known as migrant “traps” because in this era of increased fragmentation of bird habitat, these are some of the few places left that remain friendly to birds during the epic migration seasons. And they find them.

This is important to note because we are in the middle of the fall migration season now, and the neotropical migrants, especially the warblers, are here now and are passing through in great numbers.  Just yesterday (Saturday September 24, 2016) Times Beach and Tifft Nature Preserve on the Buffalo Waterfront were full of migrating warblers and other songbirds. Several species of warbler, Scarlet Tanagers, and Blue-headed Vireos were reported at Times Beach.

The poignance of these images is relevent to as we continue to consider development on the Outer Harbor, one of the most significant areas for migrating birds in our area. Sadly, development concerns continue to ignore the impacts and potential impacts of development, locton, and design of things, including tall glass buidlings on Buffalo’s waterfront. Birds and the biodiversity that they reflect are victims of this lack of conservation and stewarship thinking.

Many people think that birds are too smart to fly into buildings and that they will just “fly around them.” This bird brained thinking fails to realize that birds, which use all areas, have increasingly fragmented and microsized areas in which to rest, feed, and breed. They cannot just use, “another place” because this places are vanishing. This fragmentation continues to erode opportunities for birds to survive. The rapid decline in local and global populations, across the board,  attests to this shrinking bird friendly world, region and especially for us, the waterfront. This is especially true during migration times. Birds cannot easily just keep flying until they find a friendly place also known as migrant traps, to land and rest after the nightime migration flights. Fall migrant traps continue to be places like Times Beach Nature Preserve and Tifft Nature Preserve. It is important to note that one of the greatest threats to birds on the Outer Harbor will be a tall glass lighted residential tower. During spring migration especially, the area that this building will occupy is often enshrouded in fog and mist during the late night and early morning periods when these birds are seeking places to land after a long nights flight.  The semi-glowing enshrouded building will attract birds and the collisions are ineviatable.  So much for the good stewardship of planners and decisionmakers on the impacts of this building on birds. Goodbye birds. Welcome to 2016, making Buffalo great again!

This Wednesday evening, the Our Outer Harbor coalition will be holding a public meeting at Riverworks, about the outer harbor and development ideas and strategies. You are invited to come and share with the community, ideas and thoughts on how to proceed with development choices. For more information Click Here