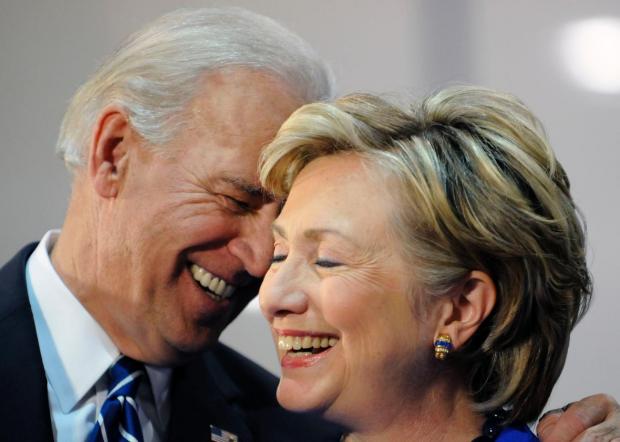 The poll numbers that hobble Hillary Clinton’s candidacy are not to be found in her still-substantial support among Democrats, but rather among Republicans and independents, who this week told both Bloomberg and Quinnipiac researchers that they overwhelmingly disfavor the former secretary of state.

“Voters say 63-32 percent, including 68-26 percent among independent voters, that Clinton is not honest and trustworthy,” Quinnipiac reports. Trump is about the same.

That’s all voters, not just Democrats who will be voting in the primaries. And the pollsters are throwing everybody into the questionnaires—including neverwuzzers like Carly Fiorina, Ben Carson, Martin O’Malley, and (dare one say it to a progressive audience?) Bernie Sanders.

But to the most recent numbers. Of the candidates who poll best in this week’s horserace, those being Vice President Joe Biden and former pediatric neurosurgeon Ben Carson, only one of the two does not believe that Satan instructed Charles Darwin to write The Origin of Species, or that the world was created in six days a few thousand years ago, or that the Bible instructs us to model our system of paying for roads, bridges, Marines, and the National Weather Service on the Old Testament practice known as tithing. That would be Vice President Biden, about whom 62 percent if the 1,574 registered Democrats, Republicans, and Independents polled by Quinnipiac regard as “honest and trustworthy.”

Meanwhile, Bloomberg’s September 23 poll has Clinton still leading (33 percent) both Biden and Sanders (25 percent) among Democrats, but the favorability dynamic is similar to Quinnipiac’s findings: Clinton’s dropped from 48 percent to 38 percent over the past few months, Sanders remained steady, while Biden’s rose to 49 percent.

This is the snapshot. But we all know what’s coming: the trickle of more, more, more stories about her emails, both personal and official. And then comes the Republican-orchestrated media circus, which the ringleader, a former prosecutor, says will take as long as it takes all day and into the night of October 22, when the Congressional Special Committee on Benghazi will hear the former Secretary of State testify on the 2012 disaster in Benghazi, Libya, in which the American ambassador and two marines were slaughtered by terrorists.

This past week, after months of not allowing Hillary Clinton any media access except to address her private and official emails, the media gave her a respite. For two days, Clinton enjoyed video and print coverage as she condemned profiteering by hedge-fund manager Martin Shkreli, who made news by raising the price of a life-saving drug from $13.50 to $750 per dose.

And meanwhile, fundraising goes on, the candidates’ campaign schedules go on, and the paid organizers and the volunteers gear up for the very compressed schedule of events that begins in February with the Iowa caucuses, moves a week later to the New Hampshire primary, then to South Carolina’s primary, and then on to March 1, otherwise known as Super Tuesday.

The Republicans will continue to provide drama and excitement as Donald Trump insults, blusters, and one-lines his way into headlines.

●Carly Fiorina will doubtless gain points by scrapping with Trump even as she explains how only she sees certain videos, and how, unlike other women doing clerical work, she did at least some of her rising by attending Stanford as the politically wired child of a high Nixon Administration official while Nixon was still in office, and maybe also how it’s not just Trump who vilifies her record as Hewlett-Packard CEO, but also the entire profession of business journalists who saw her load up the company with debt while driving its stock price down even as it violated sanctions by becoming the Ayatollah’s biggest supplier of computers.

●Ben Carson will keep being revealed as a devout Seventh Day Adventist who is not only not keen on physics (he has professed disdain for the Big Bang Theory) or evolutionary biology (see his anti-Darwin videos), but who made videos in which he quacked like a quack infomercials hawking “glyconutrient” cures for AIDS and other health scourges under the name Mannatech.

That’s the color and spice.

Meanwhile, in scenes reminiscent of the McGovern campaign of 1972 and the Mondale effort of 1984, Bernie Sanders continues to gin up crowds of Millennials, progressives, and the disenfranchised adjunct professors and substitute teachers who feel absolutely screwed by Boomer college administrators and tenured professors who selfishly pulled the ladder up behind themselves, leaving a generation of well-educated and deeply-indebted folks at the mercy of fulfillment centers, temp agencies, and their old bedrooms.

Democrats are reading the polls, and what they’re reading is that the non-candidate, the unannounced candidate, the candidate who has just-about-universal name recognition, the candidate who will be giving a speech at the United Nations next week, and who pissed off President Obama’s campaign operatives by coming out early for same-sex marriage, who wows ‘em on Colbert and gets Andrew Cuomo’s biggest smiles whenever he mentions the $15 minimum wage, is getting warmer and warming about running.

Biden with a target on him

As soon as Vice President Joseph Robinette Biden announces his candidacy, the gloves will come off. Already, Hillary Clinton’s allies have circulated a story meant to damage Biden—that back in 1991, when Biden chaired the Senate Judiciary Committee, it was his fault that law professor Anita Hill was savaged by committee members bent on confirming Clarence Thomas for the United States Supreme Court—and that therefore Biden is not to be trusted by women.

There is also an amusing video of Joe the Gripper, starring the Veep as the smiling old guy who grips shoulds, kisses enthusiastically, or just looms over women as they’re getting awards, or watching their hubbies getting introduced by President Obama, or just nervously waiting for him to get the heck out of their personal space.

Expect more of that. Expect to read again about Biden’s transgressions as a law student who didn’t footnote so much as block-copy, as a 1987 presidential primary candidate who read speeches written by Dave Doak and Bob Shrum for Neil Kinnock and recycled to their US client Joe Biden.

And there will be lots of reprising of Biden’s performance over his 36 years as a senator—including Elizabeth Warren’s tough assessment that Biden wasn’t tough enough on credit-card companies when it came to bankruptcy reform, and some national security people blasting him for what they feel were wrong moves on the Iraq war “surge,” and old, old criticism of Biden on how he handled Judge Robert Bork.

But the numbers are the numbers. Right now, Biden’s general-election electability numbers are better than Hillary Clinton’s. Among Democrats, she is in the mid-30s as a declared, actively-campaigning candidate, while Biden, even before declaring, is in the mid-20s. Should he declare his candidacy, expect a 10-point bump—a bump that will occur as hers erode under the relentless assault of a media that has linked her completely to a single narrative.

A Biden candidacy does not mean that Hillary Clinton’s massive campaign effort will simply fold up overnight. A Biden candidacy will not be allowed to simply march into Iowa, New Hampshire, and the other early primary states and take footsoldiers away from either by the energized grass-roots Sanders campaign or paid staff from the professional, extraordinarily well-funded and well-organized Hillary Clinton campaign.

What a Biden candidacy will mean, however, is that organization Democrats—the funders, the union activists, the state party apparatchiks, the elected officials at every level from local to Congressional—will be given the choice between a rising tide and a damaged vessel. Sadly for Hillary Clinton, her rivals will not have to win in order for her to lose.

She may yet outlast all her rivals, including those Republicans on Capitol Hill who revel in the email media, who organize the hearings, who advise on the more than two dozen Freedom of Information Act requests for access to her unofficial and official correspondence. She may yet prove that universal name recognition in the era of the Trump ascendancy is what a steadfast, enduring, resilient candidate needs most in order to triumph at the end of a long, very long, very arduous day.

But with Vice President Biden as a rival, Hillary Clinton will have a very much harder time seeing the end of that day. If he gets in, she will, long before the end of the day, get out.

Bruce Fisher is visiting professor at SUNY Buffalo State and director of the Center for Economic and Policy Studies. He worked on Joe Biden’s 1988 presidential campaign.