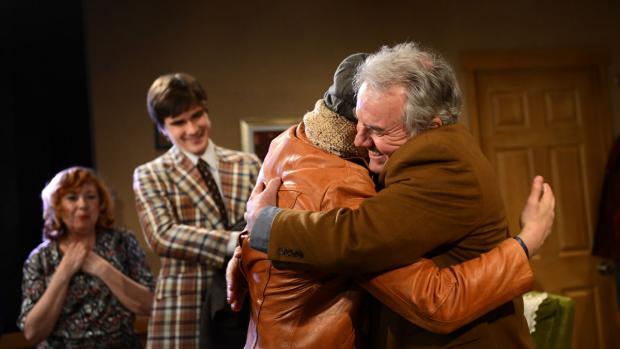 Laura Pedersen’s For Heaven’s Sake (at the 710 Main Theatre through October 4) picks up Buffalo’s story and that of its working-class Catholic families two decades after the events portrayed in Tom Dudzick’s landmark Over the Tavern. In that play, the folks above the bar are living in Eisenhower’s America at the zenith of Buffalo’s post-war salad days. Pedersen places her comedy/drama in 1974, when Buffalo was beginning to show its rust, and the country, between Watergate and the Vietnam War, appeared to be coming apart at the seams.

Roe v. Wade had been decided the previous year, and the Stonewall Inn riots happened in 1969. Yet, despite the conventional wisdom that Buffalo lags behind the rest of the nation by 10 years in just about everything, the aforementioned events have a powerful effect on the Kilgannons, who, as we join them, are preparing for a party to honor the family patriarch, Ed (Peter Davenport), at the parochial high school where he is the music teacher. His wife Joyce (Kate Kearney-Patch) and sister Mary (Paula Ewin) are preparing the refreshments in anticipation of a family dinner before heading out. The question hanging over them is whether the children, Ed and Joyce’s daughter, Kathleen (Kendall Rilegh), and two sons, Dennis (Daniel J. Self) and Brendan (Bill Coyne), as well as Aunt Mary’s Grace (Emily Batsford) and Jimmy (James Michael Lambert), will make peaceful appearances. That is not possible, as the generational divide between parents and children becomes a chasm over which the Roman Catholic Church, and the question of personal choice versus church teaching, teeters.

The backstory of these people hinted at in the first act—Kathleen had an abortion, with Ed’s complicity; something is odd about cousin Jimmy; and Grace, who works in nursing home, is losing her hair—come to the fore in a storm of familial accusations, grievances, defensive protests, entreaties, and confessions that would make Eugene O’Neill proud. It is a lot of tsuris to pack into a 40-minute second act, but what clearly comes through is the older generation’s reliance on and need for their church to dictate life’s paths for them, while the youngsters have embraced free will and the right to choose that comes with it. For them choice is the act that comes from knowing and embracing the truth about themselves, while Ed, an immensely complicated and conflicted person that Davenport just barely scratches the surface of, cautions them that with truth comes regret. Ed’s dreams of Broadway career unrealized and projected on to a less than enthusiastic Brendan; Jimmy coming out as a proud gay man; and feminist Kathleen choosing career over marriage and family in one instance but now proclaiming that she intends to marry but outside of the faith—all these drive Pedersen’s theme that choice, whether abiding by what the Church chooses you to do or deciding your own choices, will always have its intended as well as unintended consequences.

The question we are left to ponder is: Choice motivated by personal truth, or choice dictated by the teachings of an institution that has commanded your obedience all your life—which is least likely to leave you with unresolvable regret? This argument, carried out with great emotional authenticity between mother Joyce and daughter Kathleen, is the axis about which For Heaven’s Sake turns. Almost as an afterthought,  Pedersen ends her play on just the right note. Injecting more energy into the second act would galvanize the play into something breathtaking. As it was, the playwright’s ideas came through all the same.