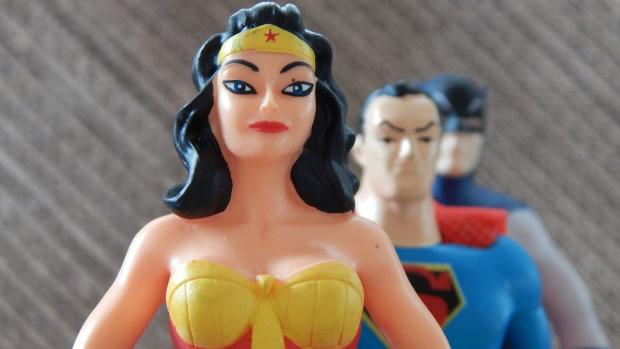 When the kids in my neighborhood played Justice League way back in the 1970s, I always claimed my right to be Wonder Woman. Although my bracelets turned my wrists green if I wore them for too long, and my tiara got caught in my hair, she was the only suitable superhero for a girl who thought girls could be powerful without pretending to be boys. I eventually had to share her with the boy across the street, and that is as suitable to the history of the times as it was to the history of Wonder Woman herself. As Gloria Steinem and Ms Magazine claimed, she was emblematic of a strong woman, in spite of her many flaws, and in spite of the kitschy presentation of Lynda Carter’s Amazon.

Jill Lepore’s The Secret History of Wonder Woman makes grand promises to find the connection between first- and second-wave feminism in the figure of Wonder Woman, but it really seeks to tell the story of her creator, William Moulton Marston, his wife, and his two mistresses, and how they lived together in a relationship kept fairly secret. Marston is a fascinating figure, somewhat creepy—a psychologist studying sadism, losing several posts for his questionable relationships with students, and experimenting in what seems something of a BDSM sex cult. He spent much of his life working on a lie detector test, but this was ultimately a failure; ironically, he was investigated for lying about the efficacy of that test as he advocated for its adoption into American courtrooms. Once his work on the polygraph was over, he seems to have spent much of his adult life writing from home in just his underwear, given to drinking and occasional rages.

Marston’s only real success is his creation of Wonder Woman in 1941, but Wonder Woman was really the creation of the Marston family collective. Always a vocal advocate for allowing women to work, he was financially supported by his significantly more successful wife, Elizabeth Halloway, an editor for a time of Encyclopedia Brittanica and McCall’s, and eventually an executive at Metropolitan Life. Olive Byrne, who was at one time a brilliant student of Marston, eventually joined the family, taking care of the Marston’s two children, and eventually her own two children with Marston. Both Halloway and Byrne contributed to his research but did not enjoy any of the credits for those contributions. That Marston gets sole credit for Wonder Woman is par for the course.

If Marston’s Wonder Woman is a feminist icon, she is a troubled one, even if Margaret Sanger herself had some influence in her development. Fortunately, however, she has had a long life independent of Marston—and of Lynda Carter—and continues in her development in this era in which we are finally seeing real attention paid to the importance of female comics readers, writers, artists, and the development of strong women characters.

Lepore, staff writer for The New Yorker, history professor at Harvard, is something of a wonder woman herself, winning prestigious grants from the Guggenheim Foundation, National Endowment for the Humanities, the Pew Foundation, the Gilder Lehrman Institute, the Charles Warren Center, and the Woodrow Wilson Foundation. She has been a finalist for the Pulitzer Prize and the National Book Award, and she won the 2015 American History Book Prize.

Lepore’s The Secret History of Wonder Woman is a fascinating and entertaining read, and her interviews are energetic and thoroughly enjoyable. Academic in its research, Secret History reaches out to a general readership. She speaks the Albright-Knox on Friday, September 25, as part of the Buffalo Humanities Festival.