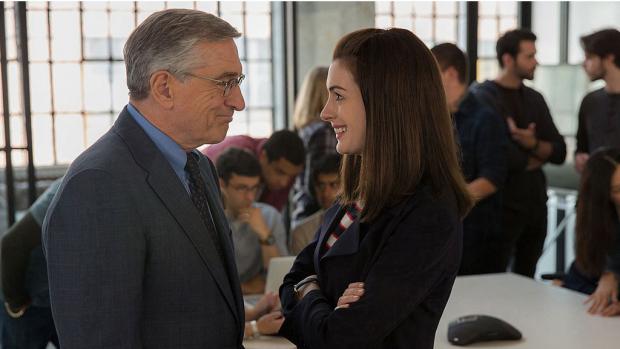 It’s a crime, a real aesthetic crime, what writer-director Nancy Meyers has done to Robert De Niro. In The Intern, she has turned him into a harmless sweetheart, a quietly avuncular, ultra-competent nice guy.

The Intern is a comedy with pretentions to social commentary that it doesn’t earn. Part of the joke, probably unintentionally, is just this damped-down De Niro, but the joke is more curious and bemusing than funny. There’s nary a hint of the menacing mood, the barely suppressed intensity, the occasional breakthrough rage, of De Niro’s memorable performances over the decades of his career.

What’s left here? Ben Whittaker, a Brooklyn retiree from private-sector senior management. Widowed, lonely, and at loose ends, he wants something more than tai chi in the park, hanging out in Starbucks, and the aggressive, unwanted romantic overtures of a female contemporary. (Why an intelligent, experienced, well-off guy can’t find something to do with himself isn’t addressed; that would probably get in the way of the contrived premise.)

He enthusiastically answers an ad for “senior interns” at an e-commerce fashion company. Assigned to Jules (Anne Hathaway in a tense, ill-conceived performance), the company founder, who wasn’t in on the gimmick and is reluctant to accept him, he inevitably becomes indispensable. The steady, diplomatic, and resourceful Ben succeeds in easing both her executive burdens and the rising conflicts in her personal life.

The film starts out as if it’s going to be a genial spoof on generational divides and digital capitalism. (Jules ostentatiously rides a bike around her open-plan office loft.) But it quickly slides into a sentiment-coated domestic-crisis dramedy built on small, easily surmounted problem situations. And through it all, rock-solid, “old school” Ben is there to smooth the way, whether he’s giving date-dress advice to one of his juvenile doofus colleagues or marital counseling to Jules. Eventually, The Intern begins to loosely suggest an old-fashioned women’s picture from a bygone era, the sort that posed a choice between career and love.

Feminist movie critic Carrie Rickey suggested in the New York Times this week that Meyers (Baby Boom, The Parent Trap) has been ahead of the social curve for a long time, but this movie is more old school than Ben. (And her picture of digital commerce is rather beside the point. Instead of worrying whether she should give up company control in favor of hiring a CEO in order to save her marriage, in the real world she’d be thinking of an IPO or a lucrative takeover by a conglomerate.) The movie has a soggy, lumpy texture. Meyers’s level of invention is low.

De Niro’s work isn’t really bad, but it’s monochromatic, almost enervated at times. It’s noticeable how little of himself he puts into it. Leading roles for actors of his vintage are probably hard to find, but he certainly does nothing pleasurably memorable in this one.