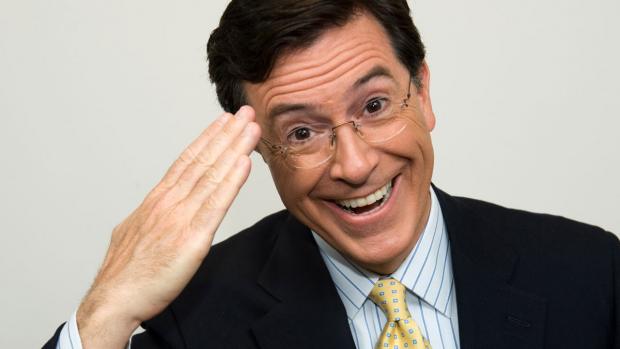 Fans of Stephen Colbert’s Comedy Central show, The Colbert Report, wondered how much would change when he stopped inhabiting or standing behind the brilliant, egocentric, energetic, right-wing character he never dropped on TV or in public appearances for years.

When asked that question over the summer, Colbert usually replied, “Not much. What’s you’ve been seeing is pretty close to the real thing.”

And when his version of The Late Show premiered on CBS September 8, we found out that, with two exceptions (one minor, one major), he was telling the truth.

The show began with a taped Colbert singing “The Star-Spangled Banner” with fans across the country; the skit ended with a baseball umpire whipping off his mask and shouting, “Play ball!” The umpire turned out to be Jon Stewart, the show’s executive producer.

Then the show shifted to real time (in the sense it was done live in front of a real audience several hours earlier) and Colbert ran onto the stage with his fabulous bandleader, Jon Batiste, while the audience chanted the familiar “Stephen! Stephen!” to which Colbert responded with the familiar, “Hello, nation.”

In the first five episodes he was the same ebullient, fast, funny, smart character he has played or been on Comedy Central for the past decade. The minor exception is that he no longer uses the goo that made the Comedy Central’s Colbert’s hair waxy and shiny. The major exception is that the right-winger who can rationalize anything and bring it around to his loopy point of view is gone. He’s not playing it straight—he is still one of the greatest comedians on television—but in interviews he is having real conversations as Stephen Colbert, not mock conversations as the political bigot who used that name on Comedy Central.

Even on Comedy Central, I always thought he was a better interviewer than his mentor, Jon Stewart. Stewart was fine with academic or political guests, but with stars he turned into a giggly star-fucker: He would laugh at things the guest maybe meant to be funny but weren’t. His tell was when he’d turn to his left and laugh vigorously into his arm. When he did that, the laugh always seemed fake, which made the whole encounter fake. Colbert never did that; he didn’t have to, because he was already in fakery mode. So, curiously, his interviews on Comedy Central wound up being more authentic than Stewart’s.

But now his interviews are straight, and, with the exception of the one with George Clooney, his first and only mushy interview, they’ve almost all been terrific. His guests have included Jeb Bush, Vice President Joe Biden, Amy Schumer, Stephen King, Supreme Court Justice Stephen Breyer, Tim Cook, and Emily Blunt. For his one-week anniversary he had Jake Gyllenhaal, with Kevin Spacey, Trevor Noah and Bernie Sanders filling out the week. His musical guests have all been equally good and equally various. He even had Paul Simon (never named on the show), with whose band Colbert shamelessly danced. He later sang a duet with Simon which was, alas, cut off because the show ran out of time.

If it keeps on like this, there will never be enough time. It’s the best show on late-night television. David Letterman chose well.