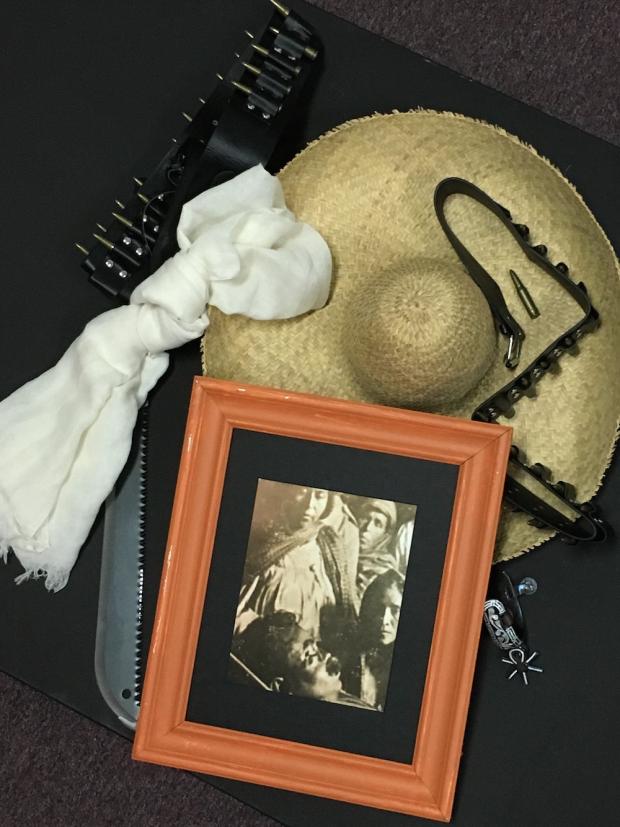 The antepenultimate exhibit at Casa de Arte on Elmwood in Allentown is entitled The Glorious Revolution! For Whom? Two more exhibits then, and closure of the gallery, which has been operated for the last seven years by life partners and fellow artists Rick Williams and Mara Odette. And “no regrets,” Williams says of the gallery experience.

Around the period when attention in this country was focused on the so-called Great War in Europe, Mexico fought a Revolutionary War of such general carnage—amid a dizzying array of changing alliances and regular assassinations of political and military leaders, but comparatively slight resultant change of conditions for the poorest and most oppressed Mexicans—as to raise the title question. Para quien? For whom?

It’s Williams’s question, and the exhibit comprises his skeptical response. Learning about the period, he said, “What struck me was the amount and extent of the bloodshed. Out of a total population of 15 million, 1.5 million died. Ten percent of the entire populace. Plus incalculable numbers of wounded and displaced. And did it do any good?”

(His skeptical attitude may apply to war in general. Williams was a medic during the Vietnam War and subsequently worked with veterans, including in a VA hospital. So he has seen his share of actual carnage, and observed the human toll versus political and social and economic actual results of armed conflict.)

Responses to the question by some Mexicans are presented in video interviews in which Williams asked them, are things better now than they were before the revolution? One old woman interviewee answered, “A little better.” A man who was a grand-nephew of General Emiliano Zapata—probably the purest of the revolutionaries, most true to the goal of land reform to alleviate the abject conditions of the campesinos—thought conditions were “much better.”

Other works include photos related to the revolution, some from various Mexican sources—including museums—others of Williams’s own making in the course of his and Odette’s sojourns in Mexico—she is originally from Mexico and they live in Mexico half the year—and others from the internet. The most impressive are posed photos of actual revolutionaries, well-armed and ammunitioned. One of a young woman fighter, another of a boy who couldn’t be more than about twelve. Some of the photos are greatly enlarged and overlaid with a translucent blue material to produce “a kind of distancing effect,” according to Williams.

A major work in the show is a triptych of video imagery of three key figures in the revolution—Zapata, Francisco I. Madero, duly elected President of Mexico, presiding from 1911 until he was assassinated in 1914, and the celebrated Pancho Villa—along with abstract paintings by Williams—black panels with a few minimalistic stripes or slashes of color, predominantly red, white, and green, the colors of the Mexican flag—recapitulating central visual motifs of the video imagery—and little shrine altars featuring dress items and accoutrements visible in the video portraits—sombreros for Zapata and Villa, a formal high hat and white gloves for Madero. Williams particularly admires Zapata, to a lesser extent, it seems, Madero, and least of all Villa.

And in the center of the room, a Christian cross arrangement of five coffins draped with a Mexican flag. For the 1.5 million.

The Mexican Revolution exhibit continues through October 1. The penultimate exhibit—through the the month of October—is tentatively entitled Who was Ray Wander? Williams said he was his cousin, who directed and wrote scripts for the very first ever television drama—called The Clue—produced for WBEN-TV in the Statler Hilton Hotel in Buffalo.