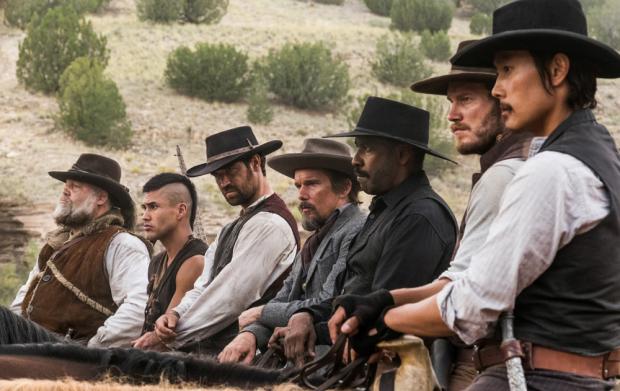 What’s in a name? If it’s the name of a movie, ask the lawyers and the accountants. Or actually the other way around: If the accountants don’t care (because it didn’t make any money), neither will the lawyers.

It’s likely that the largest segment of the audiences who will go to the theaters this weekend to see Antoine Fuqua’s The Magnificent Seven will be there because they want to see Denzel Washington and/or Chris Pratt. They may have heard the title before, but they will be no more interested in the fact that they’re watching a remake of a much-loved Hollywood film (it supposedly has been broadcast on television more than any movie other thanThe Wizard of Oz) than they are in knowing that it came from Akira Kurosawa’s The Seven Samurai before that.

And when you come down to that, you can probably trace the bare bones of the plot back a lot further: A group of flawed heroes assembles to protect defenseless people from a bunch of bad guys.

In this case, said folk are the farmers around the Old West town of Rose Creek. The years they have spent developing farms and raising families will go for naught if Bartholomew Bogue (Peter Sarsgaard) succeeds in buying them out to expand his very profitable gold mine. He’s only offering a sliver of what their land is worth, but it’s an offer backed up with a private army.

After Bogue casually murders her husband in full sight of the townspeople, knowing that they’re powerless to do anything about it, Emma (Haley Bennett) appeals to passing bounty hunter Chisolm (Denzel Washington) to help them. Despite her inability to pay much, he rounds up a gang of other gunfighters in need of work.

Like another movie from 1960, Ocean’s Eleven, the original Magnificent Seven is remembered less for its plot than for its ensemble cast: Yul Brynner, Steve McQueen, James Coburn, Charles Bronson, Robert Vaughn. Most of these were unknowns at the time, which is why the film became more popular over the years. (It was a flop when it was first released.)

Fuqua’s crew is rounded out to be as inclusive as possible (which includes bringing Bennett in for her share of the final shootout). Washington and Pratt are joined by Ethan Hawke as a sharpshooter with a crisis of confidence, Korean star Byung-hun Lee as his sidekick, and Vincent D’Onofrio (using an oddly high-pitched voice) as a retired Indian killer. Cast less for box office value than ethnic diversity are Manuel Garcia-Rulfo as a Mexican killer and Martin Sensmeier as a Comanche warrior.

The plot plods along predictably enough, with only as much drama as is needed until a final explosion of violence that takes up the last 45 minutes of the film. (If you’re going in with expectations based on the presence of co-screenwriter Nic Pizzolatto, creator of HBO’s True Detective, forget it.)

While the film gives a “based on” credit to the writers of The Seven Samurai, it clearly borrows just as much from the 1960 film. Washington and Pratt are obviously modeled on Yul Brynner and Steve McQueen; Hawke somewhat on Vaughn; there’s a knife-versus-gun contest openly borrowed, along with the bad guy’s most famous line, “If God didn’t want them sheared, he would not have made them sheep.” I’m sure the lawyers are working on it. There is no equivalent for the Horst Buchholz character, which is ironic given that he was playing the character everyone remembers from Seven Samurai, the one played by Toshiro Mifune.

The biggest advantage that Kurosawa had over all the remakes of his film (yes, there are others; no, I won’t get into them—I’ve done enough film geeking for one review) was a running time of three and one-half hours. Given so many characters, and the fact that we’re all getting used to long-form narratives on television, this Magnificent Seven seems a bit underdeveloped character wise. But for an evening at the movies, you could do worse.