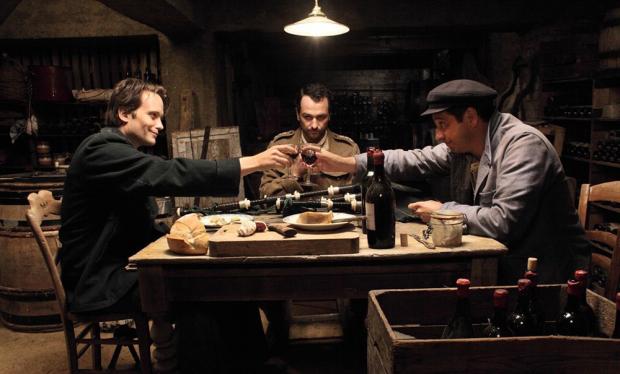 A scene of comfortable domestic ordinariness at the start of Christian Carion’s Come What May is only an abbreviated prelude to a story of escalating disruption and terror among some small-town French as the Second World War erupts. Paul (August Diehl) and his young son Max (Joshio Marlon) are soon in rural northern France, having barely escaped from the German Gestapo in 1939. Paul is an anti-Nazi activist and they assume fake Belgian identities in the French village where they wind up.

But this refuge has already been breached by the time Germany invades France in May 1940, with Paul imprisoned as a suspicious alien. Max, in the care of villagers, has to leave with them when the village is evacuated ahead of the German advance.

Carion’s incident-packed movie follows and moves back and forth between the stories of the refugees’ arduous and eventually harrowing trek westward toward Dieppe and Paul’s frantic race to reunite with his son after an escape from prison. He has joined forces with a Scottish officer (Welsh actor Matthew Rhys), the sole survivor of his British army unit.

Come What May is a bona fide war movie—it has the battle scenes to prove it—but it focuses, somewhat unconventionally, on the humble civilians caught up in the all-too-often deadly throes of war. A few years ago, Carion directed the Oscar-nominated Joyeux Noel, and there’s no mistaking his populist, commercial intentions for this one. There are desperate escapes, scenes of war’s widespread violence, and pauses for sentimental vignettes. One of these involves an appealing innkeeper (Laurent Gerra) who’s loathe to evacuate because he doesn’t want to abandon the treasured rare vintages in his wine cellar.

Still, Carion has some claim to having tried to convey the war-torn plight of ordinary people. There are credible elements of fear, poignance and horror. (There’s an opening dedication to his mother, who was a war refugee in France.)

Carion is a sort of Gallic Spielberg. He skillfully handles the interplay of sweep and big effects with smaller, emotional, and, yes, sentimental scenes. He’s a gifted popular storyteller using cinematic means. And the main performances are uniformly affecting. (Rhys makes for a rakish hero of outsized courage and witty gallantry.) I did wonder afterwards at what seemed a curiosity: The village seemed to contain no young men.

Come What May may be pitched to a wide audience, but it ends on an unsettling, unresolved note, as if to confound the expectations of a happy ending.

Once or twice during a preview of John Krasinski’s The Hollars, I idly wondered what Count Leo Tolstoy might make of the unhappy family of the title. (You know, happy families versus unhappy ones.) I like to think he wouldn’t be any more amused or moved than I was. Krasinski (TV’s The Office) clearly wants us to be both, but I couldn’t accommodate him.

Krasinski plays a New York cartoonist who returns to his hometown when his mother (Margo Martindale) is taken seriously ill. As far as the Hollars are concerned, this is Dysfunction Junction. Krasinski plays straight man as his family members’ issues explode. There are, besides the illness, divorce, projected adultery, anxiety, impending parenthood, business failure, and so forth.

It’s all played and directed with a crude farcicality and a failing wryness. Things are meant to resolve themselves in comforting sentiment, but the chief result is fine actors—particularly Martindale and Richard Jenkins—waste their efforts.