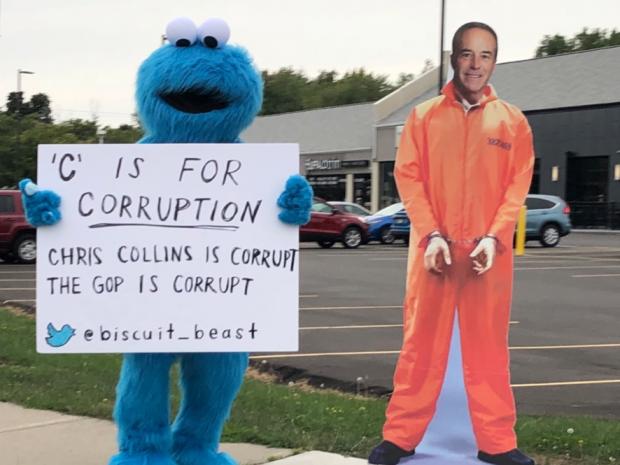 Dave Greber tweeted this Wednesday afternoon, and it perfectly and succinctly sums up Chris Collins’ (NY-27) sense of honor and duty, if not consistency:

No one ever got rich betting that Chris Collins would put his constituents or the interests of others before his own self-interest.

This is especially true for the poor saps who invested in Innate Immunotherapeutics at his urging, and didn’t get his heads-up call about the company’s failed M.S. drug trial.

Collins is under felony indictment, accused of lying to the FBI and engaging in securities fraud. There are images of him calling his son from the White House’s South Lawn on the day Innate confidentially informed its board members that its key drug trial was a failure. Almost immediately after that call, his son started dumping Innate stock, and urging others to do the same. Allegedly.

So, this hit e-mailboxes Wednesday:

This man is currently under arrest. He’s out on bail, but in custody. He’s surrendered his passport; he’s a moderate flight risk. He is subject to a grand jury’s felony indictment, charges filed by Donald Trump’s hand-picked prosecutor. After weeks of nonsense from the Republican chairmen in NY-27 about possibly replacing Collins on the ballot with bright, service-oriented, humble luminaries such as Carl Paladino or Stefan Mychajliw, Collins just yelled “psych” and stayed in the race because his lawyers told him to.

No one cares about his attacks on Nate McMurray, or on a “Canadian” health care that is so popular in that country that Canadians named Tommy Douglas — the guy who came up with their Medicare program — the Greatest Canadian of All Time. “Radical leftist” is one of the many attacks on Nate McMurray the Republicans are opaquely testing out with these obscene, borderline racist, false, defamatory, push-polls:

This sort of thing is an outrage. Every reporter covering this race needs to ask Collins about these push-polls. Who paid for them? Who approved them? Who wrote the questions? Who’s running the poll? What’s with the attacks about Asia?

His lawyers, Collins will listen to. That’s more listening than he’s ever done with his constituents in all his years in office. Even a Collins partisan would have to concede that defending oneself against a federal felony indictment is one hell of a distraction for a Congressman.

Here is the rest of McMurray’s statement:

“It looks like the criminal is returning to the scene of the crime – and I’m not just talking about insider trading, lying to the FBI and everything else he’s been accused of – I mean the derelict of duty he did by ignoring his constituents and their interests for every second of his elected life.

I’m curious to know what Mr. Collins means by ‘actively campaign’ because he hasn’t talked to his constituents, hasn’t held town halls, and has been hiding in his penthouse since the FBI arrested him. Now he thinks that the voters of this district who are getting hurt by a trade war, are struggling to make ends meet, and know that Washington is more corrupt than ever, he thinks they’re going to trust him? Give me a break. He looks out for himself. And maybe his donors.

Chris Collins has been charged with a crime. He can’t buy his way back into his job.

Chris Collins thinks the rules don’t apply to him. They do.

Chris, if you’re listening from Manhattan, here are a few words you may remember, ‘lock him up’ ‘drain the swamp’. I hear your next court appearance is on October 11. I bet some folks from NY-27 may take a road trip.

Every single one of McMurray’s points is valid. Chris Collins is not a man who sought elected office to serve people, but to serve his own self-interest. It was true when he was County Executive, and it’s been clear since he became the third in a spree of Congressional Republicans from Clarence disgracing themselves.

Chris Collins was the first Congressman to endorse Donald Trump, who ran on a platform that included “draining the swamp”. Chris Collins is the swamp, and that swamp has only grown deeper and more fetid since Trump came to power. It is up to us — the electorate in NY-27 — to drain our little, acrid corner of the D.C. swamp and send Collins back home, where he can devote all of his energy to defending himself in court.