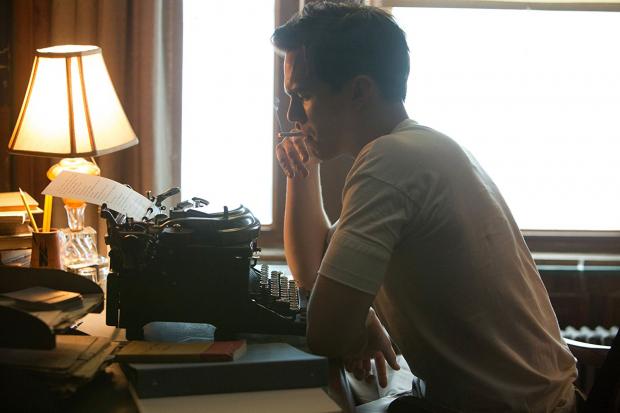 If you really want to hear about it, the first thing you’ll probably want to know is what I think about this lousy movie from Hollywood phonies about J. D. Salinger and his creation of that famous walking-talking emblemization of caustic adolescent angst and dysfunction in his 1951 novel, Catcher in the Rye, whose voice I unwisely tried to mimic in this sentence. (But give me credit: I did manage to use Holden’s two favorite words.)

And who can doubt that Holden would bluntly express his disapproval of Danny Strong’s movie? Or that Salinger would angrily reject it? For decades, Salinger emphatically rejected any cinematic use of his work. In 1949, there was a disastrous Hollywood adaptation of Salinger’s story Uncle Wiggily in Connecticut, My Foolish Heart, and the late author forsook any further permissions to filmmakers. A position his estate has maintained. So, it’s likely to be a long time before Catcher becomes a movie, if it ever does.

What we have, Rebel in the Rye (a much remarked-on clunky title), is a poor substitute. It’s not that it’s really a “lousy” picture, it’s just sort of mundane and occasionally kind of silly and evasive. Writers make notoriously poor movie material. If you’re not already familiar with their work, you have to take the filmmaker’s vouching for its excellence, and try to focus on a writer’s possibly dramatic celebrity existence, in the case of, say, Hemingway or Fitzgerald. At least with a composer, a director can have the music played strategically.

Salinger’s life is particularly resistant to movie use because for almost half of it he was a resolute recluse and published nothing but cease-and-desist demands. Strong does give us the more public and sometimes tempest-tossed early life, especially his frustrated affair with Eugene O’Neill’s daughter Oona and traumatic, perhaps emotionally crippling, experience as a soldier in Europe during World War II (although he skimps on both, in the latter instance apparently because of budget constraints).

Central to Strong’s depiction is the relationship between Salinger and writing and personal mentor Whit Burnett. Kevin Spacey is evocatively warm and intelligent as Burnett and Nicholas Hoult as Salinger can be seen and heard trying to give life to a man who hid from contact with the press and public, and sometimes his friends. His effort doesn’t usually succeed, mostly due to Strong’s script. It doesn’t even suggest why Salinger cut Burnett out of his life for decades. And it tactfully omits any material about Salinger’s widely known predilection for very young, possibly underage females.

Devotees of Catcher and the rest of Salinger’s slim oeuvre may find some satisfaction from this movie, but others are more likely to find it flat and evasive.