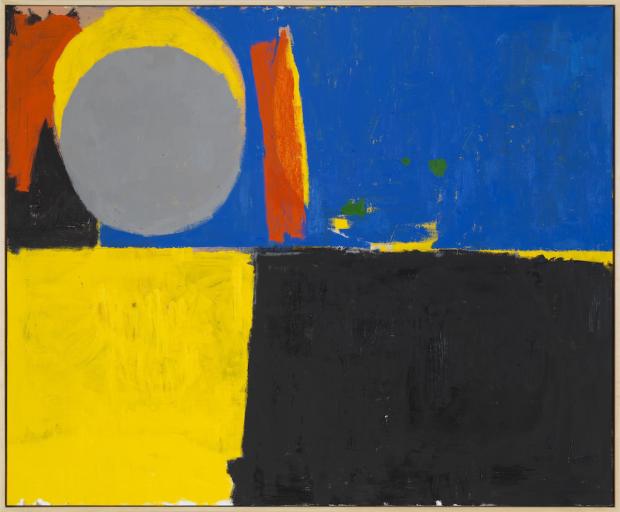 “When I was starting out, my model of how an artist’s life and career should unfold was that the artist finds his or her subject, and, you know, slowly over years and years refines the work…It took a few years in the studio for me to realize that the way I work doesn’t conform to that sort of rhythm.”

There’s something funny about Joe Bradley’s art currently on show at the Albright-Knox. In several senses. Funny as odd, and funny as comic, and funny just as fun.

In the first place—as to basic style and general demeanor of the work—it’s all over the lot. Superlatively messy gestural abstract paintings on multiple canvas segments stitched or glued or somehow otherwise pieced together as enigmatic parts of an enigmatic whole. Sometimes segments of uniform dimensions and neatly juxtaposed—you think of a checkerboard—sometimes as a kind of ordering principle—about as much ordering as any of the works will get—but more often segments of different dimensions, and as if artlessly joined. With maybe a fringe of canvas edge running across the middle of the painting.

And minimalistic drawings—a few lines of grease pencil or charcoal drawing stick on untreated canvas—these usually of some more or less recognizable image or form—an Abe Lincoln stovepipe hat in one case, in another a crescent mouth shape with a tongue hanging out of it. But no clear sense of why such an image or form. At least, in relation to the rest of the work.

And cartoon drawings—or fragments of drawings—but in any case uncontexted, decontexted. That is, single frames in each case, so no story. And again, no obvious relation to the rest of the work. Skillful doodles.

And sculptures ranging from a bronze replica of an old television set with rabbit ears—well, one rabbit ear anyway—to what seem to be found items recast in bronze and painted not to look like bronze. A featured sculpture—in the main accessway into the show—is a large elegantly fabricated sheet metal box, with no apparent opening, no way in or out.

Another set of artworks—halfway between paintings and sculptures—could be described as Lego people. Blocky humanoid figures with square heads and rectangular limbs and torso.

Wall explanatory copy among the abstract expressionist paintings avers that humanoid references abound in them. Sometimes hard to see, amid the chaos mix of apparent slap-dash application paints, and copious soil adventitious marks and smudges. Maybe the way—if you look long and hard enough—you can find recognizable images and forms in clouds in the sky.

He paints on large swaths of canvas—that he may then cut into segments—laid out on the studio floor, so sometimes must step or walk on the canvas, accounting for numerous shoe sole marks—amid myriad other non-painterly blemishes—particularly around the edges. And paints on both sides of the canvas, so ghost images from the eventual reverse side bleed through. (Sometimes maybe even humanoid ghost images.)

Plentiful references in the various works to numerous inspiration source artists—though nary a sense of mere imitation of their art—such as Jackson Pollock, Willem De Kooning, Philip Guston, Cy Twombley, and Clyfford Still. And kid artists everywhere. And Robert Crumb—the “Keep on Truckin’” guy shows up among the abstraction humanoids—and Charles Schulz.

One of the minimalist drawings—the most minimalist, actually—is a single roughly horizontal slightly wavy line on an otherwise empty canvas about where the mouth would be if this were a portrait. To me reminiscent of nothing so much as Charlie Brown’s smile of chagrin after another Lucy discomfiture. But like the smile of the Cheshire Cat. That kind of metaphysical level decontexting.

One of the abstract expressionist paintings features a large central ordure brown area, and above it some lines of Cy Twombley form-without-content writing, scribbles. The work is called Pig Pen. I didn’t get it at first. The “Peanuts” reference. Focusing on the central messy brown area, I thought, literal pig pen. The Twombley scribbles thrown in for good measure, compositional balance. Then I did. The Twombley scribbles the little dust cloud that accompanies Pig Pen—the character—everywhere always.

The Joe Bradley exhibit is in the galleries on the north side of the old building. To get to them you pass through the building main sculpture court. Sometimes for major exhibits in the north side galleries, the sculpture court is devoted to related works of other artists. In this case, just one artwork in that whole vast area. A single painting by Philip Guston, a key predecessor artist for Bradley, for the way Guston switched from figurative art to abstract and back again to figurative, and his cartoon-like enigmatic imagery, featuring bumbling malevolent KKK-reminiscent white-hooded figures and arrays of shoes or boots—a little the sense of jackboots—in studded sole views. (You surmise that Bradley didn’t walk on his paintings in the making—leaving shoe sole marks—just for practical expediency reasons—working on huge canvases on the floor—or just because Pollock might have walked on his paintings in the making on the floor—but by way of subtle secondary reference to Guston’s boot soles signature motif.)

The painting on display shows one of the white-hooded figures and a small forest of shoes or boots on little tree trunk legs sprouting improbably somehow from the ground. As a prescient retort—it seems—on the part of the Albright-Knox to Trump’s revelation—if anyone wasn’t already fully aware—of his deep-seated affinity with the dregs likes of the KKK, neo-Nazis, and other strains of white supremacist alt-right, following the Charlottesville events. Prescient in that the Joe Bradley exhibit opened—and the Guston work went on display in the sculpture court—weeks before Charlottesville.

The Bradley exhibit continues through October 1.