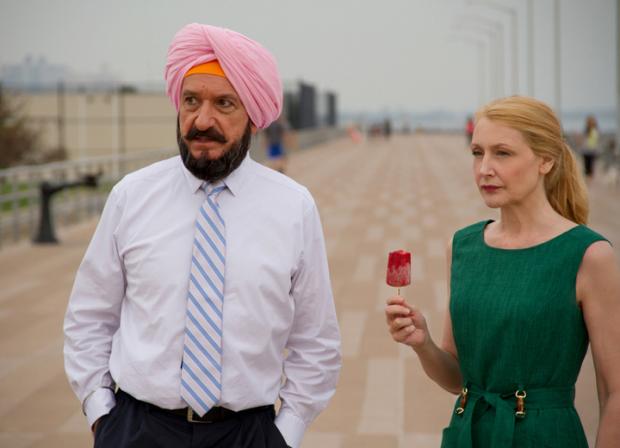 Learning to Drive is essentially a two-character story pairing Patricia Clarkson and Sir Ben Kingsley. That should be enough information to persuade most of you to go see it. For the benefit of the rest of you, as well as those of you with nothing better to do at the moment than read a long-winded film review, I will discuss it further.

(Before I do, here’s another observation that may save you some reading time: if you liked I’ll See You in My Dreams, with Blythe Danner —I know some of you did because it’s been playing locally all summer—then you’ll like this too.)

Clarkson plays Wendy, who has a job she loves and a house she loves even more. This happy life is interrupted when a somewhat lesser component, her husband, opts out, telling her he wants a divorce. Clarkson’s endlessly expressive face always makes her a joy to watch, especially in a role like this that requires her to go through a wide range of emotions with a comic edge.

As part of getting on with her life, Wendy decides to learn how to drive. That she has gotten to her age without acquiring that seemingly basic skill is explained by a fact I should have mentioned earlier: she lives in Manhattan, where the ability to drive ranks well below such urban survival skills as looking for bedbugs and finding a laundry service that fits your work schedule.

Kingsley plays Darwan, the Sikh cabdriver who gives her lessons. He is a calm and balanced man, as you would expect from anyone who could make a living teaching people to drive on the streets of New York City. But his life has not been easy: though he’s an American citizen, having come to the US from India for political asylum, he regularly has to endure official suspicion as well as bystander taunts on the level of, “Hey, Osama! I thought we killed you!” The beard and the turban, emblems of the identity he left his homeland to preserve, give him trouble in his new home as well.

The early scenes of Learning to Drive intertwine Wendy’s struggles to reinvent her life with her equally reluctant lessons in operating a motor vehicle. That the latter informs the former is, perhaps, obvious (Darwan says things like “Fear is good. When you are afraid, you are paying attention.”) But it is not, as the cliche goes, painfully obvious: the story proceeds with grace and good humor, making its points without beating you over the head with them.

It thickens with the revelation of Darwan’s own marital problems. He is looking for a wife in the way traditional to his people, which is to say that his family is finding one for him. (Casting Kingsley, who was 70 when this film was made, as a bachelor looking to start a family is a bit of a leap, but go with it.) When his bride (Sarita Choudhury) arrives from India, he has a perfectly planned life for her to fit into. Problem is, she may not be quite carved out to take that place.

If the premise sounds vaguely familiar, you may be remembering Mike Leigh’s 2008 Happy-Go-Lucky, starring Sally Hawkins as an optimistic schoolteacher whose attitude drives her driving instructor, played by Ray Donovan’s Eddie Marsan, to distraction.

Learning to Drive was inspired by a 2002 New Yorker article by Katha Pollitt and scripted by Sarah Kernochan,  who has a resume that could only be called well-rounded: after winning an Oscar as co-producer/director of the 1973 documentary Marjoe, about the former child evangelist Marjoe Gortner, she moved into scriptwriting for films as diverse as Impromptu, What Lies Beneath and Nine ½ Weeks. The director is Isabel Coixet, best known for the drama My Life Without Me.

Learning to Drive has generally received lukewarm reviews, mostly complaining that the film isn’t edgier than it is. I suppose that when your story includes a character who was persecuted and imprisoned in India for his ethnic identity you could choose to explore the darker aspects of his life. The movie also might have chosen to make more of the scenes set in Queens, probably the most ethnically heterogeneous place in the United States thanks to its immigrant population. That would be a movie I’d like to see. But it isn’t this movie, which has its own concerns and addresses them simply and winningly.