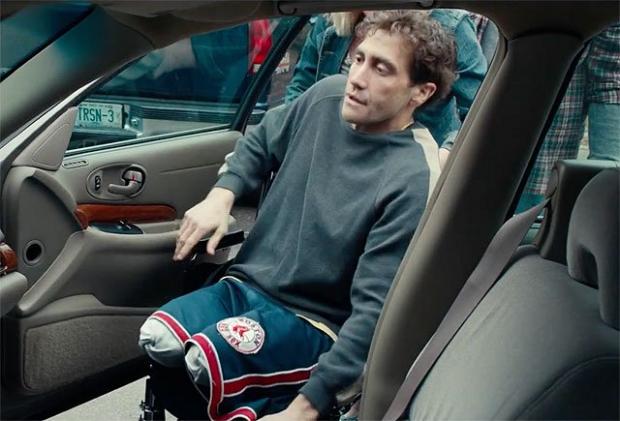 Summer is over and it’s time for movies to put away the comic book fantasies and return to reality. (This is an opening I wouldn’t have been able to use had I made it to the preview of the Kingsman sequel, which I must admit I’m quite looking forward to.)

Stronger is based on the true story of Jeff Bauman, who was standing at the finish line of the 2013 Boston Marathon waiting to cheer on his girlfriend when the bomb went off. Both of his legs had to be amputated above the knee, but he was able to give sufficient testimony to the police to lead to the arrest of Tamerlan Tsarnaev, whom he saw fleeing the site.

The film, directed by David Gordon Green and adapted from Bauman’s memoir, focuses on Bauman’s adjustment to life after the bombing: being turned into a symbol to be trotted out for ball games, lack of direction, heavy drinking. It’s pretty familiar stuff, but it’s the kind of role that actors dreams of, and Jake Gyllenhaal runs away with it. (This is by my count the fifth year in a row that Gyllenhaal has owned the autumn movie season with a killer performance, after Prisoners, Nightcrawler, Everest, and Nocturnal Animals.) The film also has excellent performances from Tatiana Maslany as his girlfriend Erin, and, briefly, Carlos Sanz as the bystander who rescued Bauman, applying tourniquets to his legs and carrying him to an ambulance.

Like Green, whose resume includes Pineapple Express, The Sitter and Your Highness, Mike White is a filmmaker who has found that it’s easier to make a living in Hollywood with broad comedies than with heartfelt dramas.  Of the two previous films White wrote this year, Beatriz at Dinner got high marks from critics, while The Emoji Movie was universally lambasted—but which one do you think made more money? (By, at most recent count, a factor of ten?)

But they both keep on trying. White takes the director’s chair for the first time in a decade with Brad’s Status, a lightly comic drama starring Ben Stiller as a middle-aged guy wondering if he’s wasted his life. He runs a not-for-profit that helps charitable groups do fundraising on social media: a job that pays adequately but lacks the hands-on benefits that provide emotional sustenance to others in his field. As he prepares to take his son on a trip to visit potential colleges, Brad is increasingly nagged by envy of four college friends who have done much, much better for themselves: a hedge-fund manager (Luke Wilson), a political commentator (Michael Sheen), an already-retired tech guy (Jemaine Clement), and a film director (White).

This is not new ground for Stiller, who often plays distractedly self-conscious characters. (One of his movies was even titled Envy.)  Brad’s Status never turns into the comedy of embarrassment we’re expecting. That said, a little more humor of some sort might help leaven Brad’s incessant kvetching, accurate as it may be: White the writer is better at expressing the dissatisfaction we all feel with modern life, where everything seems to have turned into a game with the rules stacked against us, than finding the joys that make it worthwhile. It’s a reality that might best be encountered when you’re in the right mood for it.

Two documentaries round out the week’s openings. Dawson City: Frozen Time is as unique a film experience as you’re likely to encounter this year. It is, on the surface, a history of the Canadian city that was at the heart of the great Yukon gold rush at the end of the 19th century. The gold rush literally built Dawson, which went from a First Nations camp (from which the aboriginals were given the bum’s rush) to a city of 40,000 in two years, though by the time it was incorporated four years after that the population was down to under 5,000.

Stories like that are inherently fascinating, but director Bill Morrison is up to far more than a simple history. Dawson was the last stop on a distribution chain for movies, at the time a new form of entertainment. Because the city was so remote and there was no place after that that wanted films, they were simply destroyed. A large cache of them were buried as garbage; preserved in the permafrost, they were still in good condition where they were dug up as part of a land clearance project in the late 1970s. It was a find of enormous importance given that it contained features that had been presumed lost (like 75% of all silent movies). But this treasure trove also contained stuff that seemed more mundane at the time—travelogues, ethnographic material—that now shows us sights long unseen.

Recreating this long-dead world with actual footage of the era, Morrison goes on to concoct a fascinatingly alternate history of the early 20th century, far too complex to recount here. It’s all made even more compelling for being presented with no voice-overs, only a mesmerizing score from Alex Somers of Sigur Ros. At two hours, the film is overlong, yet you can understand Morrison’s almost drunken fascination with the material. It will be shown twice at the Screening Room, on Friday and Sunday evenings.

This year marks the 200th anniversary of the Erie Canal, the waterway that made the United States what it is today. So says UB Professor (and contributor to this newspaper) Bruce Jackson, one of the interviewees in the documentary Boom and Bust: America’s Journey on the Erie Canal. The case is well made: the canal joined the Atlantic Ocean to the Great Lakes, making it possible for commerce between the middle of this continent and the rest of the world. The short but engrossing film will be shown at the North Park this Friday evening as part of a touring show. “The Heartland Passage,” which also recounts the history of the canal in song and folklore from live performers. Showtime is 7 pm.