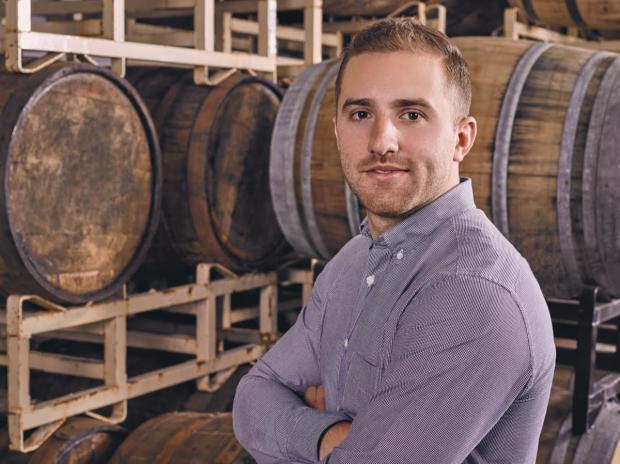 Earlier this year, Bobby Finan helped launch a whiskey festival in Buffalo. It was a success, despite a cease-and-desist letter from another popular whiskey festival with a similar name—so much so that his team, which includes his sister Margaret, who works on the festival full-time, and event organizers Step Out Buffalo, has decided to do it again less than a year later. This time the festival has been re-branded—it’s now called Whiskey Riot Festival—and it takes place not just in Buffalo but in Rochester and Albany, too, with the goal of moving into even more cities next year. If you’re here in Buffalo, you can head to Whiskey Riot Festival on Saturday, September 29. But if you’re planning to go, here’s a word to the wise: Buy tickets ahead of time, even if it’s the day of the festival, because due to regulations, they can’t sell tickets at the door.

Finan is founder and head distiller at Tommyrotter Distillery, a Buffalo-based distillery which opened in 2015. The brand is known mostly for their award-winning American Gin, but they’re now trying to break into the world of whiskey and are hoping that their new Whiskey Riot Festival will be their jumping-off point.

This week we spoke with Finan, 27, about the whiskey industry and how to dive into his festival whether you’re  an experienced connoisseur or still developing your palate for whiskey.

I know we’re here to talk about whiskey, but first let’s talk about your vodka and gin, because I know that those were the first spirits that Tommyrotter launched.

Gin and vodka are super close in production…most people don’t know this, but gin is the original flavored vodka. It’s the exact same thing as vodka—it’s just a neutral spirit. You make a vodka and then you distill it one more time and infuse the essential oils of botanicals, namely the essential oils of the juniper berry—that’s the one legally required component to make something a gin. Ours falls into the New American category. We have nutmeg, cinnamon, citrus, cardamom, and, on top of that, juniper. So it’s very unique tasting. You can drink our gin in winter, which is really good when you live in Buffalo.

How is the process of making whiskey different?

Whiskey is a totally different beast. People say all of the time to us, “Oh, I don’t like whiskey, I just like bourbon,” or, “I don’t like whiskey, I just like scotch.” That’s kind of a silly thing to hear because whiskey is a category like beer, and then bourbon and rye are all subcategories. Basically, all a whiskey is, is a distilled spirit product that is distilled from grain—think barley, wheat, rye, and corn. You’re fermenting that into a beer. You distill it and pull out the hard liquor to a more concentrated form. In whiskey you don’t want to get a pure neutral product like you’d get with a vodka, you want the flavor of the grain there. Then you take that distilled spirit and put it in a barrel, and the type of barrel is a function of what type of whiskey you’re making. Bourbon has to be aged in brand new, white American oak charred barrels. That’s what makes the whiskey actually brown, otherwise it would look like vodka but taste very different than vodka. We’re very transparent about this, and a lot of people get up in arms about it, but right now we aren’t distilling our own whiskeys. We’re sourcing from other distilleries around the country and making our own blends. That’s kind of become the norm in the craft distilling world. Typically, as you become bigger, you start backward integrating and making your own stuff, and adding that to the blend over time so that maybe at year 10 or so, you’ve got a product that’s completely your own stuff.

What is the decision to do it that way based on?

If you think about it from an investment standpoint, to buy all of the equipment, buy all of the barrels, spend all of the time to make a product that is going to sit for three or four years when you don’t even know if it’s going to taste good at the end of that time, and then have to be making it at an increasing rate that whole time, so that if demand should pick up at year five you’ve got enough to supply—it’s a pretty scary prospect to just kind of be making it, going in blind. We’ve seen in the past, craft distilleries will put out a product that they’ve made themselves that’s very young tasting, and it tastes a little rough and it ends up damaging their brand. So we’re kind of following the High West, Whistle Pig, Templeton Rye, Angel’s Envy, all those kind larger craft brands in that we’re sourcing and blending but we do fully intend to start making our own stuff in year five. Our American Whiskey, which is our core whiskey product, which is a blend of two types of bourbon and a Tennessee whiskey, those three whiskeys are blended and further aged in red wine barrels to kind of round them out.

Now that we’ve got the basics down, let’s talk about Whiskey Riot Festival. How did this start?

It has pretty humble origins. We were sitting in our bunker office at Tommyrotter, and thinking, “Everyone thinks we’re just a gin company. How are we going to get the word out there that we have a whiskey coming out?” We wanted to do something really big that gets tons of people in one place where we can show them our whiskey, and that’s where the idea for the whiskey festival came from. In the liquor industry, it’s very expensive to get in front of people. We were, like, there’s got to be a cheaper way to do this and make it affordable for the brands, ourselves, and the whiskey drinkers. We decided to throw Buffalo Whiskey Fest with Step Out Buffalo. We started selling tickets for it in November 2017, and we sold about 1,200 tickets in seven days. The event was January 2018. We executed that event and it went incredibly, but a week before the event we got a cease and desist order from the people that run WhiskyFest in New York, so we changed our name to Whiskey Riot Festival and kind of re-branded.

So less than a year later, the next whiskey festival is set to happen, this under the new name. And instead of one festival, it’s three festivals in three cities.

September 15 in Rochester, Buffalo on September 29, and Albany on October 28. We have about 50 brands at each event. It’s much larger than most other whiskey festivals all over the country, with the exception of WhiskyFest in New York City.

Other than your own, is there a favorite whiskey that you’re going to go straight to at the festival?

I’m excited about Filibuster Distillery that’s coming up from Washington, DC. I’m a total geek with this stuff. They do really cool blends and barrel finishes that are pretty zany. And then if I threw one more on there, I  would have to say Pendleton Whiskey, which is coming in from the Pacific Northwest.

If I’m someone who likes whiskey but I’m not a connoisseur, how should I approach this festival?

It’s the best opportunity for someone who is, we jokingly say, “whiskey curious,” who wants to learn about whiskey but you might be intimidated by whiskey and you don’t know a ton about it. If you’re that person, these events are fantastic for a couple of reasons: First of all, the pure economics of it. If you wanted to try 50 whiskeys, the average whiskey bottle is $35 or so, some get to $50 to $70 a bottle. It could cost you thousands to try this stuff, or you’d have to mooch off of a rich friend with a collection. Here you can pay $45 and try a ton of bottles, even if you want to try different categories and learn the difference between a rye, a Japanese single malt, and a Scottish single malt. The people who are running these tables and pouring these samples are all whiskey experts. They work directly with these brands and are in some cases the owners and distillers of these brands. They can speak with excruciating detail on the nuance of that product and about the general category.

On the other end of the spectrum, if I have a pretty developed taste for whiskey, what’s at this festival for me?

The representatives of each brand can go into such detail that you’d never be able to find on the internet and that you wouldn’t be able to get unless you went and visited these distilleries. You can have conversations with those folks and the representatives love when people are asking those questions because when people start asking serious questions you’re, like, “Oh, this person knows what they’re talking about, I can really tell them what makes our brand stand out and go into greater detail.” That’s there, absolutely, if you’re interested in it.

WHISKEY RIOT: A FESTIVAL OF WHISKEYS