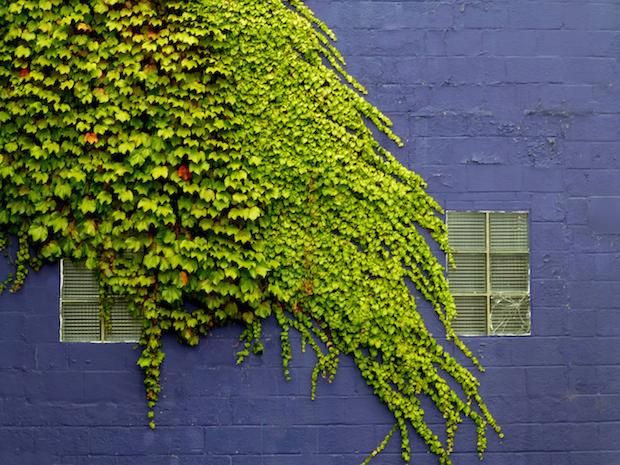 Photographer John Pfahl’s current exhibit at the Nina Freudenheim gallery consists entirely of photos of ivy usually in dense cluster masses, and venturous scion strands stretching out from the mass, that morph before our eyes into scenes, scenarios, situations, figures, phenomena. In deep greens and bright to dull reds or browns—according to the season—on brick and block and board walls, painted white, or painted or unpainted red.

In wildly disparate patterns and configurations. Several like abstract expressionist boldly gestural paintings. A single swipe of a paint-laden broad brush—like a house-painter’s brush—across an otherwise virginal canvas. Or enigmatic abstractions. Like some putative Clyfford Still work. Or like Rorschach patterns, inviting interpretations. One photo of two separated clusters of ivy on a white wall—one larger and higher, one smaller and lower—in some kind of amicable dialogue. Or maybe hostile. Maybe some kind of dressing down—reprimand or reproval—of a parent or other authority figure to a child. Some kind of unpleasant power relationship enactment. Others with multiple horizontal runner offshoots from the matrix cluster, like adolescent offspring striking out on their own from the safety and security of the parental nest.

Ivy clinging and climbing in every direction—up, down, off to one side or the other—in profusions of thick foliage usually but not invariably. Sometimes just wispy plant stems and stalks denuded or mostly denuded of leaves. One such example resembles a map of a huge and complex river system. The Mississippi system maybe, with Missouri and Ohio tributary extensions, and extensions on extensions. Suggesting the pictorial genre landscape. Or landscape abstraction. Another scant and sere foliage example—mere late autumn seasonal effects, but the pathetic fallacy operates year-round, and particularly in the autumn, whose essential message is so plain and poignant—gives a sense of desolation. Despair almost.

Other somewhat tidier patterns, suggesting fountains, suggesting Victorian wallpaper. One suggesting espalier art, but not art in this case, but work of nature, or predominantly work of nature, it appears. Another suggesting a monster. A lush proliferation of dark ivy on a white wall that morphs into an animate but inhuman creature—gremlin, gnome, troll—with widespread beady eyes and unkempt bushy hair flying outward in both directions, and upward in likely—the photo cuts off at a point—some wild formation topknot. Another with ivy spreading downward somehow from the top of a wall—possibly overflowing from the other side—suggesting the hanging gardens of Babylon.

A few feature graffiti elements. In one with obscenities—a familiar graffiti word and familiar graffiti image—the ivy seems to be attempting to spread to screen over the offensive material. In another more innocuous example—a cartoon clown image and inoffensive or just inexplicable literal matter, it seems, from partial and incomplete views of both graffiti categories—the natural and artwork elements seem to more peacefully coexist. And in the hanging gardens of Babylon example, the wall—or parts of it, large block components—must have been parts of a billboard previously. Professional product large capital letters barely show through a subsequent coat of white paint. A combination of the letters O and W—but the W partially obscured, so that it looks at first glance like a V—reminiscent of the Robert Indiana iconic LOVE painting or alternately sculpture in the Albright-Knox Indiana exhibit.

The John Pfahl show is entitled Ivytown Wall Drawings. It continues through October 16.