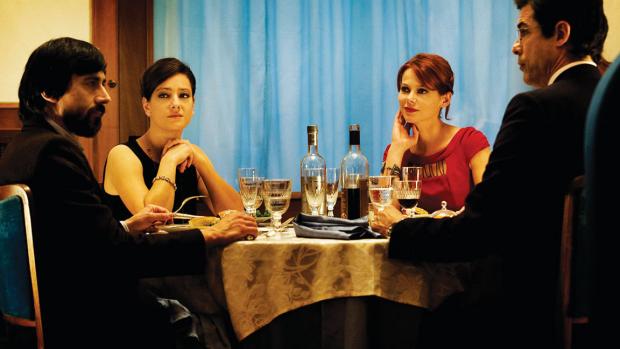 Is there a richer subject for drama than unhappy families? Around the world, people thrown together by biology struggle to share close quarters: hilarity or tragedy may ensue. As Robin Williams used to say, “What a concept!”

Opening at the North Park this weekend, the Italian drama The Dinner takes a meandering route to get to where it’s going, but I can tell you this much: It’s not headed for the hilarious side of the street. The story encompasses the families of two brothers, played by an all-star Italian cast. Paolo (Luigi Lo Cascio) is a doctor who struggles to keep up the hopes of his patients, no matter how dire their situations. His brother Massimo (Alessandro Gassman) is a lawyer who has grown wealthy, in Paolo’s opinion, by defending the scum of the earth, though Massimo argues that he simply plays a necessary role in a system that guarantees every accused person the right to counsel.

Both are married; each has a teenaged child. The kids—pretty and popular Benedetta, pimply and surly Michele—get along well; the wives (Giovanna Mezzogiorno, Barbora Bobulova), not so much. When Paolo’s wife comes to believe that the teens may have been involved in a brutal crime that has shocked the country, the differences among the four adults come to the fore as they argue about how to react.

The film is based on a novel by Herman Koch that was an international best seller a few years back. There has already been a Dutch film of it, directed by Steven Spielberg’s sometime collaborator Menno Meyjes; Cate Blanchett was attached to direct an English language version that never got off the ground.

But Koch’s tale has been changed substantially, so much so that the title is barely even appropriate. (The entire story in the novel takes place during a dinner that occupies only a few minutes of the film.) Koch, who has a reputation as a satiric misanthrope, used his story to attack social conventions from table manners though the sixth commandment—the one that demands, “Thou shalt not kill.” Two-thirds of his characters are eventually revealed to be psychopaths.

As adapted by co-writer/director Ivano De Matteo, this version—released in Italy under the more appropriate title I nostri ragazzi (Our Children)—is more concerned with issues of empathy. The story opens with an instance of road rage that is horrifying, not least because you can’t lay the entire blame on either party. Caring doctor Paolo flaunts his empathy, but could it be that Massimo is the one who truly practices it? And is it possible that the children, despite solid middle-class upbringings, wholly lack it?

De Matteo’s systematic examination of this theme is engrossing, and may remind you of another Italian film, Human Capital, that played at the North Park earlier this year. But it’s not a clean fit with his source material, and the shocking ending, which I presume to be Koch’s, feels arbitrary, as if de Matteo couldn’t figure out a suitable way to finish his story.