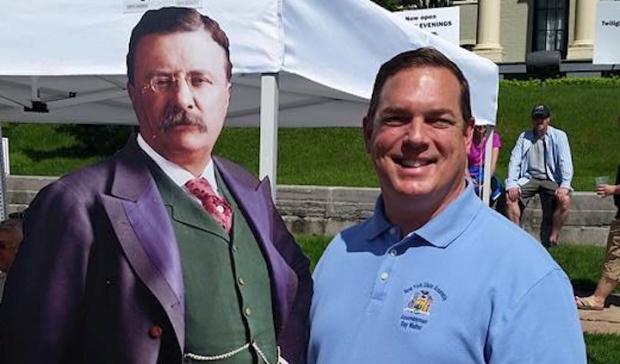 Because the Buffalo metro area is conveniently located on an international border, we’ve grown accustomed to seeing Canadians at the mall, at Sabres games, at the airport, at the gas station, and at restaurants and festivals, happily parting with their loonies as they purchase things that swell our sales-tax coffers. Canadian commerce is a big part of the explanation of how it is that Erie County government keeps collecting more and more sales tax revenue. Another part is our aging population: Lots of empty-nesters who live in houses with paid-off mortgages have lots of disposable income, which they are evidently disposing of by buying stuff that is subject to the sales tax.

If you’re a member of a town board, or a school board, or a city council, Erie County just keeps raining sales tax money on your jurisdiction, and you’ll never have to vote for a property tax increase so long as you don’t promise big tax cuts—and so long as the Canadians, the oldsters, and the trickle of out-of-town tourists keep buying stuff. The Erie County Fiscal Stability Authority estimates that by 2018, Erie County will collect over $485.9 million in sales tax, which it distributes to itself and to the 25 towns, the 16 villages, and to the 28 school districts here. Last year, Erie County collected $435 million. The ECFSA reckons that the sales tax will increase by about 2.75 percent a year.

Had regionalism prevailed over localism in the 1950s, when Erie County government went from being a board of supervisors anarchy to a county executive with a county legislature, then perhaps sales tax revenue would be spent more intelligently. After all, there are far fewer people here today than there were at our 1970 peak of 1.1 million. Were there one government for the fewer than 930,000 people in Erie County—just as there is one government for the eight million people of New York City, and one government for about 2.5 million people in Toronto—there wouldn’t be a clamor from local politicians to divide up the boodle differently than the way it was decided, in 1977, to a “sharing” of the sales tax.

Sadly, the political class decided against metro government in 1960. The political class rejected Ned Regan’s modest regionalism program in 1976 and Joel Giambra’s city-county consolidation in 2004. Indeed, after the budget impasse of 2005, the state politicians who approved a .75 percent sales tax increase (Giambra had been rebuffed on his request for a one percent increase) mandated an additional “sharing” of the sales tax with the town governments of Erie County.

It was a mistake—because distributing more sales tax has insulated politicians from the consequences of continuing to operate governments that outlived their reason for being back when the telephone was invented.

The myth of capped taxes
In New York State, counties collect the sales tax and remit the state’s share electronically, once a week, leaving the counties with whatever is left over after their legislatures agree with the rate. Sharing the sales tax has been the rule in Erie County since 1977.

Republican candidate Ray Walter, who wants to change the distribution of the sales tax such that Buffalo gets less and town governments and school districts get more, accuses incumbent Erie County Executive Mark Poloncarz of being a captive of history. That’s disingenuous—because neither the Erie County executive nor the executive plus the legislature has the power to change the sales tax distribution. All the recipients would have to agree. Then the State of New York would have to agree. Walter is making a political gesture, which we will parse.

But here’s the gist of it: Local politicians, thanks to relentless anti-tax messaging by the property-owning class, are loathe to raise revenue by increasing the property tax rate, and the suburban elected official of any party absolutely adores the idea of a big bump-up in the pennies-from-heaven revenue that rains down from Erie County.

Ever since New York State enacted the two percent property tax cap, mainly to restrain the growth of truly punitive property taxes in Downstate, especially in the Hudson Valley, politicians here have become ever-more enamored of the sales tax. The property tax cap can only be breached if a super-majority of elected officials votes to do so.

The first myth is that the property tax is an unfair burden because it takes a big percentage of the value of a piece of property that isn’t very high. Do the math: We in Upstate have an under-supply of people and an over-supply of real property, especially of housing and of commercial office space. If the development industry weren’t so heavily subsidized by all the little governments that permit, incentivize, and prod over-construction, then demand would more closely track supply, and the actual value of property would rise. But no. Here, the real estate industry endlessly parrots the untruth that our property taxes are “the highest in the nation.” Not true. But the effect of endless repetition is that now it is an article of faith.

The second myth is that the sales tax is a harmless revenue. Harmless, fair, progressive—because everybody pays it. Drug dealers, rich people, foreigners, tourists—everybody! Except that as a share of income, the sales tax takes much more from moderate-income and low-income households than it does from high-income households. Yes, indeed, tourists and Canadians pay it. Yes, Canadians pay as much as six percent of the total sales tax collected here. But almost 70 percent of households here report incomes that are well below the median household income of New York State. Our middle-class, our poor, our elderly, are paying outsized shares of their income on this—and they are not getting what the Canadians get when they pay their hefty “harmonized” or combined provincial sales tax and goods and services tax.

The third myth is that sales tax, as a regional revenue, should be distributed for local-government purposes. It most definitely was a mistake to whack it up in the first place. The best way to treat sales tax would be to route every penny of it through New York State, in which case the messy, complicated, divisive “sharing” formula in place here would be rendered nugatory. Erie County government itself, whose budget is at least 90 percent mandated or directed by state and federal programmatic formulae, would be the logical recipient of this revenue, because, in essence, county governments are branch offices of the state and federal government—until such time as New York State wises up and makes them into true regional governments.

The politics of “sharing”
The three myths of property taxes being unfair, of sales taxes being fair, and of “sharing“ the take being wise, have doomed us to three pernicious realities: to endless suburban sprawl, to both a cognitive and a behavioral disconnect between services and their costs, and to a sly, ugly, persistently racialized language that undermines democracy.

That’s why the Republican candidate for county executive is claiming that suburban towns need big increases in their allocations of sales tax. Suburban politicians would much prefer to get more pennies from heaven rather than do the logical thing and base their spending on the big increase in the taxable value of real estate right under their feet.

Suburban town leaders want to be the protectors of the well-off people and profitable corporations that are experiencing large increases in the value of their real estate. The longer answer is rather uncomfortable and quite sad: The Republican candidate for county executive wants to continue the often successful campaign trick of claiming that all the “tax eaters”—which is to say all the dependent, shiftless, non-contributing people— live in Buffalo (and in the other two little cities in Erie County, Lackawanna and the City of Tonawanda), and that changing the formula for dividing up the sales tax will give town governments their “fair share.”

The campaign will fail, because even were the Republican to defeat Democrat Mark Polancarz, the sales tax distribution formula would not be changed without every signatory to that agreement having a say. Call me a risk-taker, but I’ll venture this: Neither the City of Buffalo, nor the State of New York, will agree to handing out more revenue to suburban towns.

Sadly, one must agree with Ray Walter on this: We are indeed stuck with a bad “sharing” plan that should be jettisoned. But when we are rid of it, we should also be rid of each of the 25 separate towns, the 28 separate school districts, and the three separate cities now extant in Erie County. There should be one regional government, one school district, one police district, one fire district, one sewer district, and one metropolitan transit district, all working under one truly regional plan—funded by one property tax and one sales tax.

The villages? They can stay. They’re so quaint and photogenic. But they can live without sales tax—which is a regional revenue for regional services.

Bruce Fisher is visiting professor at SUNY Buffalo State and director of the Center for Economic and Policy Studies. He is also former deputy county executive for Erie County and author of Borderland.