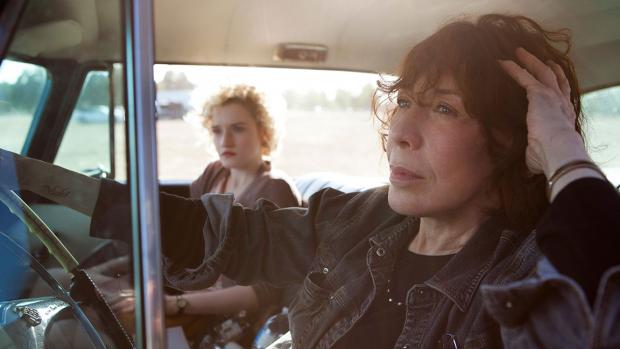 “You want some tea?” says Elle (Lily Tomlin) to her granddaughter, Sage (Julia Garner), who has paid her an unexpected visit. It’s about the last time that she says anything that you might expect from the title character of a movie called Grandma.

For one thing, Sage arrives only minutes after Elle has broken up with her much younger girlfriend Olivia (Judy Greer). She tries to be gruff about it, but we seasoned filmgoers can tell that she’s really trying to break an attachment that she doesn’t feel is good for the younger woman. Elle has never quite gotten over the loss of her longtime partner, Violet, which has caused her to withdraw from her life and career: She was once a well-known feminist poet, who slid into a less rewarding but more comfortable life in academia. (During an argument, when they start throwing hurtful names at each other, Olivia brings out the big guns: “Solipsist! Writer in residence!”)

So when Sage tells her that she needs $600 by the end of the day for an abortion, the presently impecunious Elle is spurred into action. Trying to find the cash leads them on a days journey that brings Elle in contact with everyone from her past. Well, not everyone, but enough of them for us to get a pretty good understanding of her life’s ups and downs.

Written and directed by Paul Weitz, one of Hollywood’s more interestingly uneven auteurs (About a Boy, Being Flynn), Grandma gives the impression of having been shot very quickly, with a name-value cast who are probably friends of Tomlin and/or Weitz: Sam Elliott, Marcia Gay Harden, Elizabeth Peña, John Cho, Orange Is the New Black’s Laverne Cox. Or perhaps they signed on because the parts probably only required a day or two of work and were well enough written to make up for the low pay. (Elliott is particularly good.)

The movie flies by, barely breaking the 80-minute mark. It’s helped by Tomlin’s skill with dialogue: No one knows better how to snap off a sarcastic retort, and she gets plenty of them here, though her best moments are the ones where Elle is momentarily silenced by long-surpressed regrets. It’s a modest film that more than pays off its investment. (Among those who an take credit is Andrew Miano, one of the film’s producers and a native Buffalonian.)