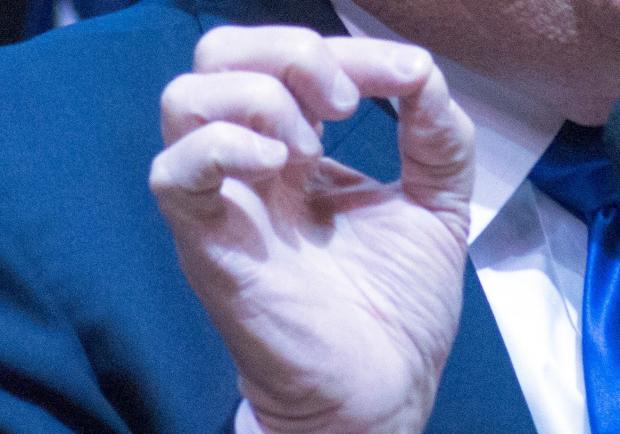 Mark today, September 15, 2016, as the day Bloomberg News sealed Donald Trump’s victory in the presidential race. The once-estimable straight-up news site reported Trump’s “economic vision” as if it were a coherent presentation by a credible, well-advised public leader rather than as what it was: an incoherent jumble of contradictory utterances, at once betraying complete ignorance of energy markets, fiscal and monetary policy, the US budget process, long-settled issues of the law of property, and also of, um, math and physics.

Bloomberg played it straight. Bloomberg thereby made Trump credible. This is a disaster, because many people who are legally empowered to cast votes in the upcoming election will have to choose between believing the enticing promises of the bellowing alpha male, or crediting the criticism of the snarky, scolding grandma whom too few people believe can ever tell the truth even when her doctor says she is.

Evidently, nobody who works for Hillary Clinton is capable of explaining to the candidate that she must not ever, ever say any words but those that calmly, in a reassuringly undramatic manner, that she has everbody’s back–everybody’s, even those among us who like guns, distrust sneering elitists, and fear globalization. Nobody told Hillary Clinton that the language of political analysis is to be left to political analysts, who are allowed to use words like “deplorable” to describe Trump’s supporters, while candidates are allowed to use the word “deplorable” only on her opponent’s record or on his statements.

Deplorable is what American journalism has become.

The price of oil is set by a global marketplace. One can check it every day. At present, as for the last many months, oil goes for less than $50 a barrel. That’s less than half the price of oil at the time construction of the Keystone Pipeline was first planned. President Obama canceled that pipeline because, when the global demand for oil tumbled as the global supply swelled, the economic rationale for Keystone disappeared. Demand for the dirty, expensive-to-produce and expensive-to-refine oil from the Canadian tar sands has plummeted. Ditto the demand for the dirty oil that is fracked out of the Bakken Shale in North Dakota. Market forces are what they are: oversupply of cheaper, lower-sulfur oil is a long-term trend. Anybody with a computer or a tv or even just a phone can verify this reality at any hour of any day. It’s just reality.

So why would Bloomberg News merely play stenographer when Donald Trump says that he will command construction on the Keystone Pipeline, despite all the information that is available to the global marketplace. That marketplace – which includes the stock market, and the sovereign wealth funds of oil-producing nations like Saudi Arabia – has made a long-term commitment to alternative energy production. These are not environmentalists, or hippies, or Green Party ideologues: they are capitalists. They are betting against oil.

Check out the Petroleum News. Check out the Wall Street Journal. Check out the numbers portion of Bloomberg News, the Financial Times, Investors Daily, or anyplace where investors actually look for news. Everybody expects oil to remain in oversupply, and cheap, and many, many are predicting that the slack demand for oil is a permanent market reality.

That reality is a crisis nearby. The Canadian dollar has plunged below 77 American cents mainly because the market for Canadian tar-sands oil has fallen apart – but according to Bloomberg News, Donald Trump knows better. Bloomberg News did absolutely zero fact-checking as it reported Donald Trump’s statement about the Keystone Pipeline for oil nobody wants to buy.

But check this out: it took Trump fewer than 10 seconds to claim that he will do Keystone. It takes a bit of work, if one is not up to speed with the past few years’ trends in the global petroleum market, to get up to speed. It’s a lot easier to nod, and remember how every American president since Richard Nixon has promised “energy independence,” than to fact-check Donald Trump every time he repeats a non-fact.

Gorilla gestures. And tax fables, too

When the alpha male gorilla in this year’s presidential race throws a used tire across the compound, bellows, and beats his chest, all the little monkeys cower and nod.

The rest of Trump’s utterances about his economic “plan” are similarly nonsensical, and similarly estranged from reality – but they will now have to be debated by the incompetent politician Hillary Clinton and her league of tone-deaf, powerless, incompetent handlers.

Take his child-care tax credit jaw-flap. The economists at MIT have counted up, metro by metro, how much child care costs. The cheapest a working parent can get away with around Buffalo, New York, runs to $200 per week for one child. About 70% of income-tax filers around Buffalo, New York reported $30,000 per year or less in adjusted gross income. Do the math. Until the child goes to public school for the 180 days of the school year (still leaving the parent/s with between 40 and 50 summer days, plus various school breaks, long weekend Mondays, and non-Federal holidays to pay cover), a working parent or family has to pay $10,000 out of pocket for child-care. Trump’s proposed tax credit maxes out at around $1,200.

One hopes that multiple news organizations, economists, bookkeepers, and independent analysts of all stripes unanimously, repeatedly, and with great vigor point out that Trump’s child-care tax credit is as much a fraud as his Keystone Pipeline cant. One hopes that a panel of debate moderators quotes those authoritative sources to rebut Trump’s claims on the debate stage.

And one also hopes that Hillary Clinton’s handlers somehow get the courage to explain to her what it was that people liked about Barack Obama back in 2008: that he rather than snark, bellow, belittle, or roll in the slime, he offered poise, calm, gentle humor, uplift, and a hint of the utter inner peace that every anxious voter yearns for in any leader anywhere from the office to the playing field to the Oval Office.

Bloomberg News isn’t making it easy. The Washington Post, which calls Trump out and instantly fact-checks his bullshit and everbody’s else too, is doing a great job of journalism – which is probably why voters in the Virginia and Maryland (and not just in the Democrat-heavy areas of Metropolitan DC, but statewide) are so solidly for Clinton. Ditto readers of the Los Angeles Times.

Shudder. Just check the facts. Sadly, as Tom Edsall and other have pointed out, the facts don’t seem to matter.