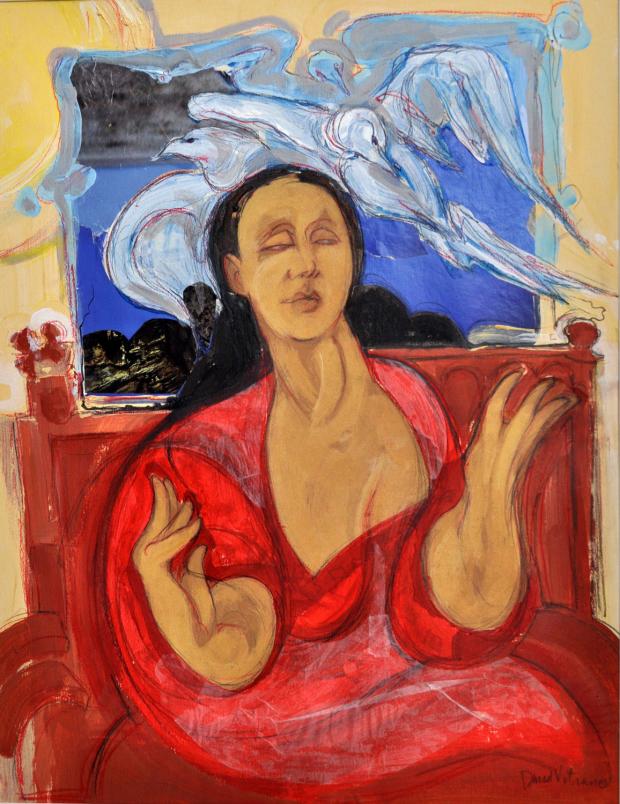 Some of William Blake’s most characteristic works—apart from his social/political works—are his illustrations of Dante’s Divine Comedy. The most memorable perhaps—partly because one of the most memorable episodes in Dante—the encounter with Paolo and Francesca, in the first circle of Hell proper, the circle of the lustful. The illicit lovers caught up in a whirlwind—an image of their once uncontrolled passion—wherein they will be buffeted for eternity.

Characteristic especially because of the peculiar quality of fluidity, liquidity, amorphous form, that is a signature feature of the Blakean pictorial style. Romantic reaction to the previously dominant Classicist temper of the arts and other areas.

Vitrano’s exhibit is called Paper, Scissors, Rock, and consists of paintings with collage elements, and table object clay sculptures. Comprising a series—the only series—of paintings/collages, entitled Celestial Objects, plus Roman numerals to individualize. Featuring single human figures in flotation attitudes, poses. Heavenly constellation figures possibly, but if so, novel constellations, nor identified as such. More reminiscent actually of the figures in the whirlwind in the Blake Dante illustration. And in the Blakean art fluidity characteristic in general. In terms of the attitudes of the figures represented—here not so much buffeted as wafted—and in terms of the milieu, whether sky or water.

Another painting in similar spirit and mode—but not specifically in the Celestial Objects series, because no Roman numeral—is called Celestial Couple. Presenting two figures, male and female. They could be Paolo and Francesca. (Absolved and redeemed somehow. Dante would not have objected. “Who am I to judge,” he might have said in this case.)

Other paintings are portraits or portrait variants, all in the same basic pictorial style, with collage elements that are subtle to unnoticeable except on close inspection—knowing they are there, and so to look for them. Some of the subject matter seems to play on myths or other literary material, but in new and idiosyncratic ways, not as traditionally transmitted. For example, one painting is called What Ophelia Saw. Ophelia from Shakespeare’s Hamlet, no doubt, but gazing into a mirror, a little like Narcissus in the Greek myth. Matter that’s not in the Shakespeare play. But maybe suggested by the manner of Ophelia’s death. As a possible last mortal action, gazing into the water. Another is called Ophelia Finds a Gem. Underwater now, so conceivable ultimate action. Again not in the Shakespeare play, nor even possibly suggested.

More overt use of collage elements emanating aura around a goddess figure in the excellent Mandala. Among other notable paintings/collages—all portraits of sorts—Black Vest, Linen Kimono, Not What I Thought, and the superb A to Z.

The sculptures are molded clay in red-brown or yellow-golden, and give a sense of the sculptural process, the sculptural figure often still emerging from the clay matrix. Unformed form again. And medieval resonance again. Thinking of some typical medieval sculpture, like the door jamb statues at the portals to medieval cathedrals, joined to the pillars behind and supporting them. Still part of the pillars. Free-standing statues with a front and a back didn’t occur as a generality until the Renaissance.

Hooded Figure consists of a head in a hood above a clay block of a few minimalist planes with protruding inchoate hands and feet. At Peace consists of the head and torso and folded hands of a female figure above, a vase form below. Around the Corner consists of a human figure in a two-vertical-slabs interior corner. The figure as if trying to escape the matrix background. A little like the cathedral door jamb statues.