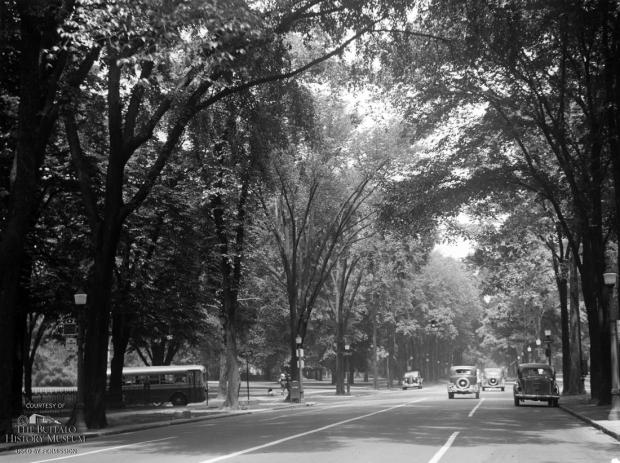 “It pays to have a beautiful city; and in no way more than by having fine trees can the beauty of the city be increased.” –Dr. Matthew D. Mann, Society for Beautifying Buffalo, 1905

Buffalo was once known as the City of Trees. Buffalo and Washington, DC, could plausibly claim to be the two most lushly and meticulously planted cities in the United States. This photograph, taken by Wilbur H. Porterfield in 1939, shows the “cathedral arch” of elms, two rows on either side, towering over Delaware Avenue near Summer Street. These trees were among the more than 300,000 street and park trees cared for by the city forestry division and its 30 full-time foresters, and are an example of what Matthew Mann of the Society for Beautifying Buffalo meant when he wrote, in 1905, that “the best effects in planting street trees are obtained by evenly spaced, regular rows of one kind of tree.”

In 1951, the first local case of Dutch elm disease was found on Riverview Place—the diseased elm promptly cut down, and burned. By 1953, the Parks Department declared a “state of emergency” in connection with its battle against the pandemic, with the department dropping all other tree work to concentrate on the removal and destruction of affected elms. All efforts to abate the disease, including the liberal spraying of toxic DDT, proved ineffective. Few of the 180,000 elm trees that existed at the time—about 60 percent of all city trees, and including those on Delaware Avenue—survived.