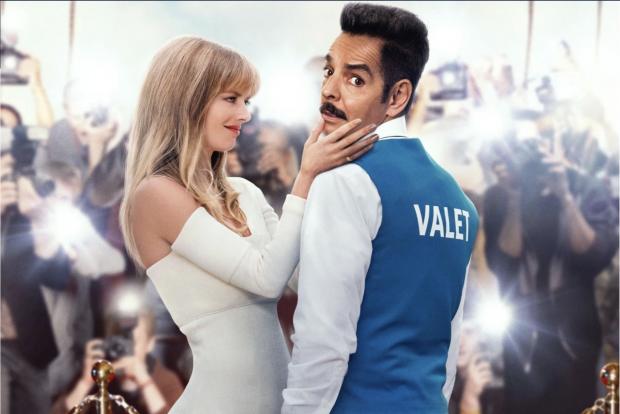 The Valet retains so little of the 2007 French comedy of which it is a remake that you wonder why they just didn’t change the title while they were at it.

The bare bones of the plot remain: unambitious Beverly Hills parking valet Antonio (Eugenio Derbez) is hired to pose as the lover of famous actress Olivia Allen (Samara Weaving) in order to cover up her affair with wealthy businessman Vincent Royce (Max Greenfield). But what was a lean and funny farce in the hands of writer-director Francis Veber here becomes a goodnatured but soppy and overlong feel-good vehicle for Mexican superstar Derbez. (The adaptation was written by Bob Fisher and Rob Greenberg, who also rewrote 1987’s Overboard for Derbez in 2018).

Derbez’s usual good looks submerged under a silly Christopher Walkenish hairstyle, Antonio is a sad sack who lives with his mother and pines for the wife who recently left him. He can’t believe the situation he has found himself on, as friends and family start to treat him as a great lover because of his “conquest.” Olivia, on the other hand, lives a lonely-at-the-top life, and soon comes to envy and appreciate the warm family life that Antonio enjoys.

It’s all as predictable as a bowl of macaroni and cheese, and at over two hours – well, how much macaroni and cheese do you think you can eat? Derbez has a great deer-caught-in-the-headlight look for the films early scenes, but generally plays things straight. Weaving’s pampered-but-goodhearted actress comes off as a bargain basement Shelly Long, while Greenfield can’t do much with a stock-villain character whose says things like “I don’t understand when gentrification became a bad word.”