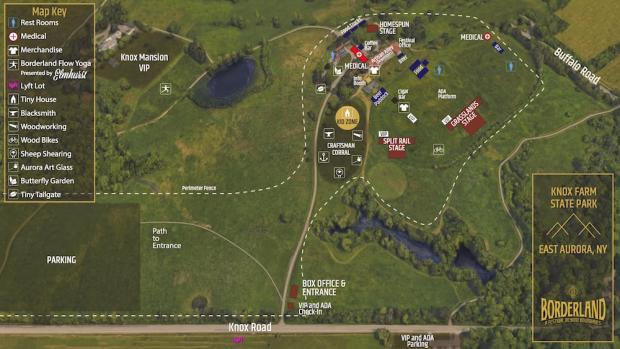 Our partners at the Borderland Music + Arts Festival, which takes place September 22 and 23 in East Aurora’s Knox Farm State Park, have just released a site map (above), which serves as an illustration of how much this festival has to offer: the Craftsman’s Corral, where there will be demonstrations and workshops on boatbuilding, blacksmithing, and sheep-shearing, among other activities; the Kid Zone, where there will be children’s activities; a cigar bar, a beer paddock, a battalion of food trucks, as well as a food tent featuring the wares of local chefs and several bars serving locally brewed beers; Artisan Alley, in which local artists and crafter will exhibit and sell their work; and of course three stages for music. And  VIO respite across a pond from sll the goings-on, in the shadow of the former Knox family mansion.

The music, arts, and artisan schedules are below. Buy your tickets now at borderlandfestival.com.