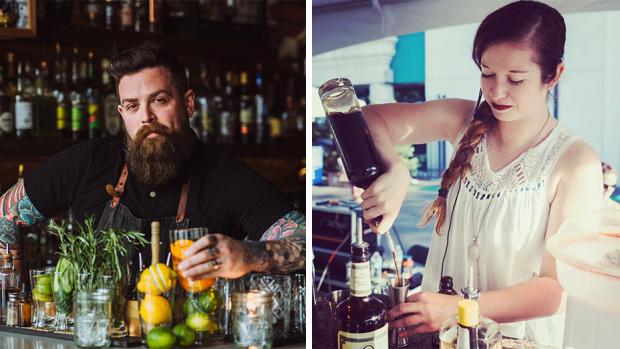 Craft, signature, house, speciality. Whatever modifier comes before “cocktails,” it is undeniable that something has been happening for a few years across the United States. What was once the purview of a few select bars that are now industry landmarks, like Employees Only in New York City, have become the norm in any mid-size city. Cities like Buffalo.

Rachel Wright, bar manager at Hertel’s Mes Que, on what she sees happening: “I think the craft cocktail movement is definitely a millennial thing. From the 1950s to the ’90s you were pretty much drinking crap unless you were on a cruise drinking tiki drinks. There’s definitely a learning curve to it, but we are going back in time before the ’50s. We are re-elevating the craft. It’s not just slinging drinks. It’s an art and an experience.”

“Our process at Mes Que is pretty extensive,” a bleary Wright told me over coffee at Delaware Park. She had just closed the night before, and I feel bad making her talk about work as soon as she wakes up. She’s very polite, though, and the more she talks about her craft the more animated she becomes.

“Each bartender has to come up with three cocktails. They meet with me and we critique, taste, and tweak. Then we have a staff-wide tasting meeting were all of us taste each other’s cocktails. We chat. We vote. Then we look at what we selected and put that together and check to make sure we have a cohesive list. We need a balance between the nerd cocktails and the more approachable cocktails like our Pink Rabbit orYoga Pants that were just on the menu.”

At Vera, a similar process is taking place. Jason Wood, smoking on a bench with a Red Bull, has the advantage of meeting me later in the day. Wood expanded on Wright’s answer: “We also pick glassware to make sure we don’t have too many coupe drinks. Not only is the lack of visual variety a problem, but the bar can only have so many coupes.

“The glassware has to suit the cocktail too. A coupe, since we’re talking about them, has those edges on the side to bring the cocktail directly to your face, and that fits certain drinks better than, say, a Collins or rocks glass.”

As a former touring musician, most notably with It Dies Today, there is something about the way he is describing glassware selection that invites a comparison to stage presence. “Sometimes it’s aesthetically driven, too,” he says. “The idea is all five senses being activated. I want the drink to feel a certain way in your hand. I want it to taste a certain way, for it to smell great. To look a certain way. For you to hear me making the drink. If all five senses aren’t tingling, then there is something wrong.”

One can perfect a single cocktail recipe through trial and error (and a generous amount of product with the support of the bar owners), but all of that time and energy is wasted if no one is willing to try it. Fortunately both Wright and Wood are charismatic, befitting their positions as the public faces of their respective bars.

Wright gets people to try things all the time. “We had a cocktail called the Vecchia Signora [cucumber, gin, soda, Thai chili bitters, lime juice] and I used to suggest that to people when they’d ask for a vodka or gin and soda. It has similar flavors, and is a similar experience. Nine times out of ten they’ll try it.

“It’s also a matter of education. Not everyone realizes that cocktails can be approachable and enjoyable. It isn’t just some snooty thing we were are all talking about Chartreuse and lavender foam.”

Wood takes a similar approach at his bar. “There are people here and there that say underneath their breath, ‘Oh, $15 for a cocktail,’ and I tell them to try it. If they don’t like it, I am happy to make them something different. This is treating yourself, not work. My staff and I truly appreciate you coming in here—especially now that there are so many choices. If I see that you’ve only taken two sips over the last 20 minutes, you probably don’t like your drink. I’ll grab it and say, ‘I’m going to drink this. What would you like to drink? That’s what I want to make for you.’ Sometimes they’ll say, ‘No, I’ll drink it.’ But that’s not what I’m looking for. I want you to want to have two more in the next hour because you love it.”

The birth of a cocktail

Wright says, “If the idea is in my brain, I just need to make it work. Sometimes I just want to make something funky.”

She really lights up when talking about her experiments with Tejuino (te-HUI-no), a beverage made from fermented corn popular in the Mexican state of Jalisco.

“I am working on a cocktail Jalisco Dreaming. I was just out there with USBG (see The Public August 17, 2016). They have an awesome program with Patron so I was flown out to Mexico for three days. I was at their hacienda in the Jalisco region and I tried this beverage and they make it with the Tejuino, fresh lime juice, and they top it with lime sorbet and salt. I wanted to pay homage to to the Jalisco region and use that inspiration to make a cocktail. It has been quite the challenge. The Tejuino needs to ferment for two or three days, so it needs air. I didn’t put enough sugar content in the first couple of batches so one definitely got mold. The second one I stirred constantly but it tasted musty. I’m tweaking that recipe out and there aren’t a lot of resources available for me to consult. It’s very much a recipe that varies family to family, made in the backyard by a grandmother. When that is perfected, I’m going to combine it with Patron Incendio, which is a coffee liqueur, but it is really spicy because it has arbol chiles in it—and it also has some chocolate, so it almost tastes like a mole. And I’m going to use corn to fat wash the tequila. I like cocktails that have a story and I like to make cocktails that challenge my palate.”

Rachel Wright learned to make Tejuino on a research trip to the Jalisco region of Mexico.
Photo by Roman Polyachenko

While Wright opts for narrative, Wood tells me about a cocktail that Alex Wenzel invented that was much more analytical. “Wenzel is a mad scientist. He’s going to do something weird and make his own orgeat or milk wash something. One of his cocktails that is still on the menu and is crushing it is the Back in My Day. It’s tobacco-infused bourbon with a smoked syrup. We take mesquite, pecan chips—things that you’d smoke meats with—toast them in a pan and then cook the syrup in that. The smoke comes through in the syrup. The tobacco comes through in the drink, and it reminded all of us of our granddads. At that point all of those ‘When I was your age’ type expressions were being tossed around. ‘Back in my day’ came up, and that was perfect. That type of thing is just his style. He has a centrifuge so he’ll make clarified lemon or lime juices. Lime juice will have more lime flavor and you can make a clear daiquiri with it. He also makes clear ice. Every weekend we will have a couple bags of it. It’s not appropriate for every drink, but it is a great thing to have when it’s appropriate.”

Additionally, Wood has a new collaboration up his tattooed sleeve. “One exciting thing coming up for the fall is that we’re working with Dave Collins, head brewer at Resurgence Brewery. We had this idea to do a cocktail-flavored beer. Not a beer cocktail, but a beer designed to taste like a particular cocktail. It’s modeled after a Fitzgerald [gin, lemon, sugar, Angostura bitters]. A pretty simple cocktail that is a great vehicle for gin and it crushes it. When people tell me they don’t like gin, I’ll make them one and not tell them there is gin in it. Then, when they love it, I tell them it’s a gin cocktail. It’s my big ‘gotcha!’ moment.

“So we are doing a kettle sour beer and adding gin botanicals in the dry-hopping session to add the gin elements. Then we are adding some of the elements of bitters, and then just a bit of sugar. It’s a hefty beer, it should be about nine percent. I feel like it is going to be a home run. It’ll be at our five-year anniversary party this Thursday [September 15], and if it does as well as we hope, you might see cans in the future. It’ll be called Reverend Wood’s Fitzgerald.

“Distilling and brewing are so closely related. Distilling is just taking beer to the next step by cooking down the beer to create alcohol vapors.”