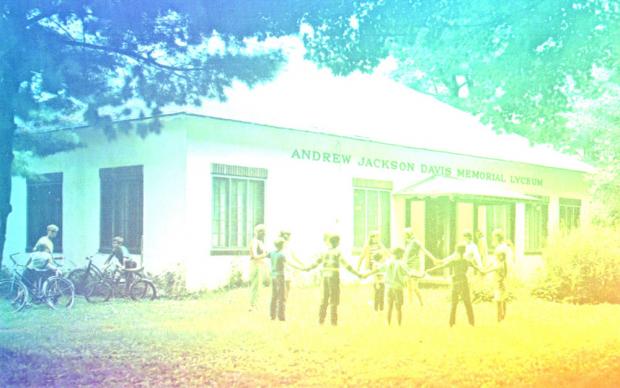 “In this room right now, there are radio waves, and if you have an instrument to tune properly, you can pick up opera channel, a sports channel, a rock-and-roll channel, by tuning in. It’s always there. It’s just when you use a tuner that you can pick up what’s there.” —Neal Rzepkowski

The artist collective Flatsitter is embarking on an ambitious virtual reality art project this month using the history of American spiritualism and interviews with mediums at Lily Dale as part of the project. Excerpts from those interviews are woven into this article—and the full text of these is available here.

Flatsitter’s Kyle Marler was drawn to Lily Dale’s hopeful ethos. “The city is so cheerful, and there is this light-hearted embrace and denial of death, explains Marler. “‘We never die’ seemed like a great counterpart to ‘You only live once.’”

Marler’s Lily Dale contains 20 different “scenes,” landscapes of sight and sound that akin to something you might find in a video game. The scenes you will experience are determined by drawing several tarot cards from a deck custom-created by illustrator Bobby Griffiths.

“We were born to die. Do we die when we go to the other side? No. We continue on in the spiritual part of us that god created.”  —James Barnum

The world of mediums, mystics, and deep dreamers occupies a lot of common ground with Flatsitter’s past immersive projects. The technology of virtual reality places the participant in a foreign environment, replacing all natural perception of sight and sound with that of the artists’, something very much akin to an out-of-body experience or a dream, two elements of human experience that are foundational to how spiritualists view reality.

“Seven years old, and I used to swing a lot. And dare myself to jump off of the swing. So, one particular day—it was a beautiful day with wonderful sky. Our house was right across the street from a Catholic church. So, I was focusing on the steeple of the church. And focusing on the clouds. And imagining what angels would be. And got as high as I possibly could on the swing. Parallel with the top bar. I wanted to fly. That’s all I wanted to do was fly. I jumped, and floated upward. And was kind of surprised that finally I was flying. And, I was heading directly for the steeple of the church. Which I would’ve needed to go over my house to get to. So, I continued to go higher and further, and I got to tell you that feeling was just unbelievable.” —Jackie Avis

In interviewing Lily Dale mediums, Marler discovered a rich source text for the project imbued with historical and cultural ramifications.

Nineteenth-century Upstate New York became a hotbed for religious experimentation and radical social movements that had profound impacts on the development of a young nation, as the Erie Canal connected a localized, agrarian economy to a global market. To name a few: the Women’s Rights movement centered at Seneca Falls; the deeply religious, Lake Placid potato-farmer-turned abolitionist crusader John Brown; the teenaged Joseph Smith, who claimed to find tablets buried in a hillside in Palmyra that he translated from an unknown language into English that became the basis for the Book of Mormon; and William Miller, whose failed prediction that the Second Coming would occur in 1844 nevertheless helped spawn Adventism and Jehovah’s Witnesses.

The “burned-over district” of Upstate, so named for its frequent revivalist sweeps, yielded much of the fruits of the early American spiritualists like the Fox sisters in Hydesville, and Cora L. V. Scott, who grew up in Cuba and Buffalo. Hidden under the dust of 20th-century industrialization is a legacy of people imbued with charismatic and ecstatic traits.

“Our soul is our capacity to think and to feel. That part goes to the spirit world. (Our spirit is our life energy.) I was totally wide awake when this happened. I had just bought my house here. It was in 1990. The first time I’d ever been away by myself for a week. I was up really early that morning, and I was writing different things. Thinking about being here by myself. Then I went upstairs to run the bath and I was singing to myself the hymn “How Great Thou Art.” And in a really good mood, and the bathtub’s running, and then all of a sudden — I look up and I could see my mother and my father and uncle and aunt and they were singing with me. Behind them were thousands of people singing. That is something I will never forget. It was amazing. It was amazing.” —Lynne Forget

The movement met at the confluence of the burned-over headwaters and the river of blood that was the Civil War. The Chautauqua County town, Lily Dale, beside the serene Cassadaga Lake, was incorporated in 1879 as a camp and meeting place for spiritualists. Trauma like war or death begets a yearning for closure and meaning, a desire to defy the pain trapped in our physical bodies.

“When I was 10 my dad died. He died in the night and his body was gone when I got up in the morning. Then, my mother sent me off, of course, to stay with an aunt to get me out of the house and out of the way for a while. I was very upset that I hadn’t got a chance to say goodbye to my dad. And so he came into a dream one night and told me why he hadn’t been able to say goodbye. And I woke up all the way and he was there talking to me and we had a lovely conversation, and then he went on.” —Gretchen Clark

Buffalo attorney and video artist Kyle Marler is the driving force behind Flatsitter, maker of a series of virtual reality projects over the last few years. Marler started it with former Squeaky Wheel director Jax Deluca before a move ended her involvement, and Marler has continued to use the Flatsitter name and describe it as a collective, which helps him enlist the support of other participants, facilitators, and enablers. In this case, mediums who conduct spiritual traffic between life and death.

“I was influenced by Dan and Melissa [Meola] Shanahan at Torn Space, and their ability to produce amazing large-scale projects by finding talented artists and letting them ‘do their thing’ essentially,” Marler says of his affinity for opening his projects to the talents of others, clairvoyant or no.

Interested parties can drop in to experience Flatsitter’s Lily Dale on Saturday, September 17 all day in Lily Dale’s Octagon Building on Library Street, or on Friday, September 23 in Buffalo’s Big Orbit Gallery, as part of a full installation assisted by David Mitchell, Max Collins, and Carlie Todoro-Rickus.