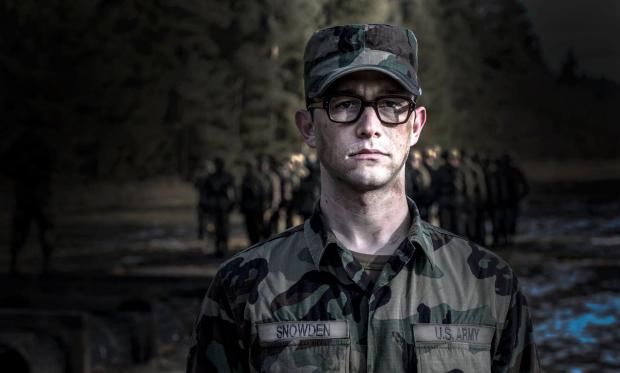 In a way, Oliver Stone is the right director for a movie about Edward Snowden, the renegade American spy who revealed the vast and illicit electronic spying on Americans by American intelligence agencies, principally the National Security Agency (NSA). Stone has persistently been a politically motivated filmmaker with a leftist bent. His first mainstream writer-director work, Salvador (1986), was about American journalists covering the effects of US intervention against a Salvadoran insurgency against a brutally oppressive autocracy.

But Stone is also responsible for one of the most recklessly inflammatory, demagogically false movies in cinema’s history: JFK (1991), about the Kennedy assassination. And he has showed a dismaying Trump-like intemperate indifference to fact, as when he complained in 2010 about Jewish “domination” of the news media and said Hitler was “misunderstood” because of it. And it didn’t enhance confidence in Stone’s ability to treat Snowden’s story and motives reasonably when the director made a deal with a Vladimir Putin-connected Russian lawyer who claimed to represent Snowden to adapt this guy’s pulp-fictionalization of Snowden’s story. (This, apparently, to gain access to the forcibly exiled former spy in Russia.)

So there was ample room for concern about what Stone would do with this material. But damned if the often erratic, polemically unhinged filmmaker hasn’t just about brought this thing off. If there was room for doubt, now there’s cause for relief, and even some admiration. If Stone’s Snowden isn’t a gracefully consistent and integrated picture, well, it’s an Oliver Stone picture, and what do you expect? He has turned out one of the most important biopics in recent memory. Stone has risen to the occasion. His all-too-frequently impassioned approach isn’t absent, but he seems to have made an uncustomary effort to be fair. Not journalistically objective or balanced, mind you. The movie celebrates Snowden’s sincerity and courage, but its tone is a long way from pedal-to-the-floor gonzo. Stone has made a movie that’s both large-scale and intimate.

It opens on June 3, 2013 in Hong Kong, when Snowden (Joseph Gordon-Levitt) has fled with four laptop computers containing clear evidence of the US government’s alarmingly broad and illegal spying. He’s secretly summoned documentary filmmaker Laura Poitras (Melissa Leo) and Guardian newspaper journalists Glenn Greenwald (Zachary Quinto) and Ewen MacAskill (Tom Wilkinson) so he can hand over the secrets he stole from his job as an NSA contract employee in Hawaii. Stone effectively renders the tension in Snowden’s hotel room, making it almost palpable, using stark lighting and ominously angled and focused photography.

Snowden is well aware of his perilous situation and he tries to impress on his guests the danger they’ll face. (Much of this generally tracks the scene Poitras captured in her 2014 movie Citizenfour.) The strained, anxious hotel setting is a sort of home page for the long flashbacks Snowden employs to tell how its protagonist wound up there. It delves backward to his early aborted effort to joint the Army Special Forces, the CIA’s recognition of his remarkable largely self-learned computer engineering and programming skills, his disillusionment with CIA dirty tricks in Geneva, and his interrupted route to work for an NSA contractor. It convincingly portrays his difficult romance with a young woman (Shailene Woodley) who chafes at the secrets Snowden has to keep, even when the couple is in danger.

The middle section of the movie flags a little, as if it and Stone were a bit overwhelmed by all the detail as he tried to keep things accurate. But Stone mostly holds his storyline together and keeps it involving. The movie makes this young man’s personal odyssey from an idealistic if rightist libertarian mindset to a sobering leftward drift out of innocence. Gordon-Levitt’s performance is a key factor in the movie’s success. He conveys Snowden’s earnest, troubled, self-examining sensibility.

Stone pulls off two especially striking scenes: a Big Brother-esque one where Rhys Ifans as a CIA official, appearing as a giant image on a computer screen confronting Snowden as he sits alone in a dark room, and another suspenseful Hitchcockian one in which Snowden steals the secrets.

Snowden is a powerful and valuable movie. Maybe Stone has partly atoned for previous sins.