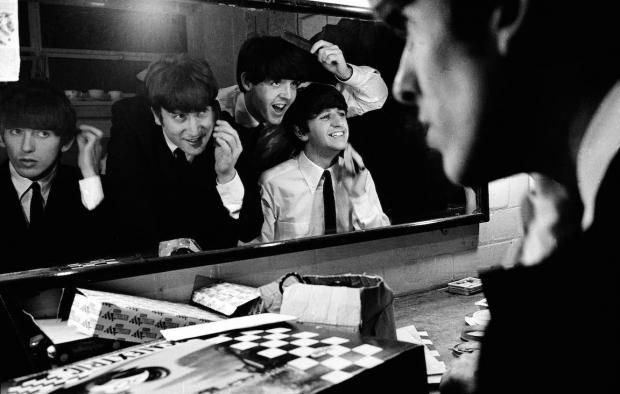 I’m going to mention this right at the beginning so you don’t miss it: When you see Eight Days a Week, Ron Howard’s new documentary about the early years of the Beatles, do not leave the theater when the movie appears to be over. Yes, the credits will roll at about the 100-minute mark. But after the movie is finished, the show includes a remastered version of The Beatles at Shea Stadium, the professionally shot (Gordon Willis was one of the dozen cameramen) film of their historic performance in front of 56,000 fans. Never released to home video, it hasn’t been broadcast in decades and is pretty much worth the price of admission all by itself.

And it’s something you won’t see if you watch the documentary when it premieres on Hulu this weekend.

Even if it were, though, this is one to see in a theater. While it covers the familiar history of the band and probably contains little that fans won’t already know, it concentrates on live performances, most of which have been restored to a polish you’ve never seen.

There are the obligatory talking heads, some valid (new interviews with Paul McCartney and Ringo Starr), others less so (Whoopi Goldberg and Sigourney Weaver may have been of an age to have seen them live). It’s good to hear from Richard Lester, who directed their films, and Larry Kane, the Miami journalist who accompanied them on their American tours. One wonders why no one from any of the bands who opened for a Beatles show could be found to comment on their experiences: The Moody Blues, Tommy Roe, and Brenda Holloway are all still around, and could almost certainly have something to say about trying to play in front of thouands of girls screaming, “We want Ringo!”

More than anything else, if you were ever a fan, and especially if you remember Beatlemania firsthand, you’ll want to see it for the footage of the Fab Four talking to the press, both formally and informally (not that they treated the two any differently.) The value of the music is unquestioned, though there’s an interesting commentary from a scholar who opines that in terms of consistency of melodic invention the group was bested only by Mozart. But Howard emphasizes the sense of camaraderie among them: the pleasure in each others’ company that made them so endearing to the world and that made it hurt all the more when they broke up in a slog of lawsuits and public sniping. The film follows them to the end, with some footage of the 1969 show on the rooftop of Abbey Road studios, but its emphasis is on the few short years in 1964 and 1965 when the world loved the Beatles and they loved us right back.

It’s always interesting to watch a performer try to break out of his or her safe zone and do something different from what the public expects of them. In the case of Eddie Murphy, of course, he’s not risking much: He hasn’t had a hit comedy in a long, long time, and in recent years seems to be semi-retired. But if he was hoping that Mr. Church might open up opportunities for him as a dramatic actor, well, it’s a good thing he’s got another Beverly Hills Cop sequel lined up.

It’s not that Murphy is all that bad as in the title role of a cook who finds himself working for a dying single mother (Natascha McElhone) and her daughter. Don’t ask me to explain: It doesn’t make much sense and is only the first of far too many clumsy and implausible dramatic contrivances by writer Susan McMartin.

The problem is that the character is so underwritten that Murphy has almost nothing to do other than look restrained and dignified. As the years go by and the girl grows up into Britt Robertson, we wait patiently for what we assume is going to be Mr. Church’s backstory. But when the film is over, we realize that the character is nothing more than the stereotype that Spike Lee famously characterized as the Magical Negro.

The film was directed by Bruce Beresford with the sunny nostalgic hue that has become his stock in trade. Beresford, you may recall, also directed Driving Miss Daisy. Enough said.