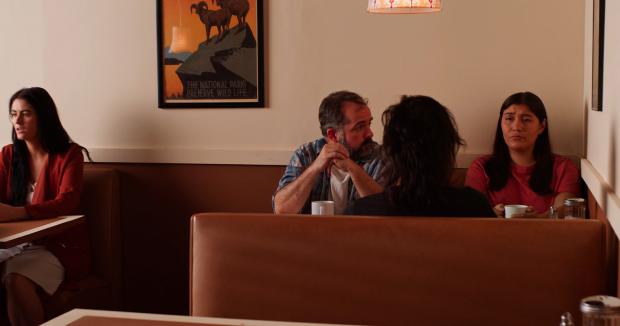 In the upstate New York town of Suffern, a young woman named River (Joelle Montoya) spends her days wondering what direction her life will take. Her time is spent with friends and acquaintances who are equally unmoored, including a financially desperate co-worker (Laura Desmond), a petulant bartender (Rivera Reese), a petty thief (Nick Carlascio), and an old woman (Ellen Boscov) whose once good life has passed her by.

In his statement for the film, writer-director Brian Mihok name checks such New American Cinema inspirations as Barbara Loden, Dennis Hopper, and John Cassavetes, along with international minimalists like Eric Rohmer and Abbas Kiarostami. But the independent filmmaker whose oeuvre this evocative, deliberate short film most evokes is Hal Hartley, albeit with little of Hartley’s quirky humor.

(Some incidental similarities: Hartley also started his career filming on the outskirts of the New York City region, and scored his films with his own solo guitar compositions that he credited to a pseudonym.)

While it’s brief running time (under an hour) is held together by a plot about a robbery, Sunspot is essentially an examination of people who are waiting for their lives to take shape, or, in the case of the older characters, wondering why they never did. In conversation, they ask questions that go unanswered: How did your parents die? What is your first name? Are you from here? In a discussion about the possibility of extraterrestrial life, one character posits, ”If there are aliens, I don’t think they’d do anything we’d understand,” to which River responds, “Do people?”

Mihok’s aesthetic has a firm grip on place (it’s a shame the cinematographer isn’t credited), which keeps the film engaging even when seems to be meandering, with a romantic encounter that River lets slip away or a shaggy dog story about a Roman torture device that just keeps getting nastier. Some may find it too long, but I would be hard pressed to say what could have been removed. If anything, Sunspot takes advantage of the chaotic state of current film distribution in refusing to conform to an outdated standard for how long a “feature” film needs to be.